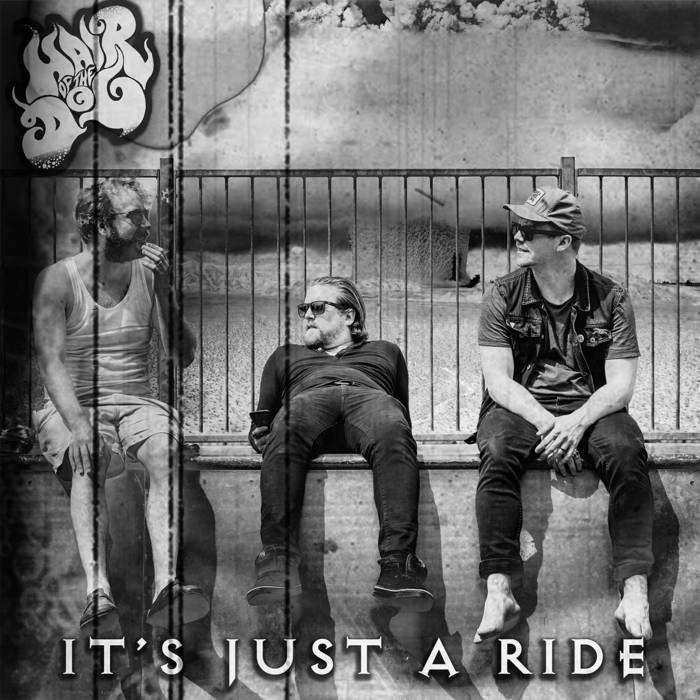 Retro Prog, is this what I’m hearing, is this even a genre? Two likeminded brothers, Jonathan (Drums) and Adam Holt (Guitar/Vocals), started out in their youth covering Led Zeppelin and Jimi Hendrix around their native Scotland. After a break of 15 years, in 2013 they reunited with their old school friend Iain Thomson (Bass) and produced a self titled EP, that came out the following year. This sparked a lot of interest in the band and support slots to the likes of the Blues Pills, Vintage Caravan and Mos Generator were the result. A debut album ‘The Sirens Song’ was also brought out in 2014. On 3rd April 2020 another album was released ‘It’s Just A Ride’ and I couldn’t wait to hear it.

A few spoken words of introduction lead in to the title track, an instrumental and pulsating rhythm, before a mass of repeating chords. The vocals enter and the similarity to Plant can’t be avoided. I suppose they must have been a great Zep covers band, back in the early days. But shifting that aside, there is a lot more to Hair Of The Dog and as the song progresses, there is more intricate guitar dabbling. ‘Run and Hide’ is again Zeppelin influenced but the rhythmic sawing of the off key guitar, invokes more likeable disturbance. The third song ‘She Was’ has haunting echoes to begin with, these are soon overlapped with layers of Sabbath like riffing. Tiers on tiers of applied heavy pressure and was that a cowbell I heard ?

When you listen to ‘We Are The Cancer’ with its flowing melody, it does conjure up The Doors in places. There is a rawness and that uneasy feel of anticipation, like something is going to hit you at any moment. That comes halfway in, but at 9 minutes in length, there are many elements of surprise just in this one track. There is time for it to wander, there’s no need to hurry, I remember when albums often included a marathon of a song, it was the norm years ago. ‘Will They Forgive Us’ samples lower vocals, more repeating notes and a slower pace. We go from the deepness of ELP to the refrains of Pink Floyd and it is quite enthralling. The 6th and final track ‘The Writing On The Wall’ has far ranging vocals that whirl around, while the guitar and bass give off simplistic, yet dramatic hooks.

Well, despite being too young to have experienced that gradual mind-blowing infiltration, that those progressive bands of the late 60’s and early 70’s did to your brain. The ones who pushed the musical technology of the day to the limit, managing to re-programme you, into appreciating sounds never made before. Hair of the Dog have created a magnificent modern twist of heavy progressive rock, previously associated with bands like Rush and King Crimson. I don’t compare Hair Of The Dog to well known bands, with any disrespect in this review, it’s just so you understand the basic direction they are heading. Oh and believe me, calling themselves after a Nazareth album is as far from their style as you can get, the sound of Hair Of The Dog is profoundly intense, yet fresh and warmly satisfying. After listening to this album about 4 times, I’m convinced I have stumbled upon a band of immense promise and I will follow them closely from now on, starting with buying the whole back catalogue.

Highlights – It’s Just A Ride, We Are The Cancer