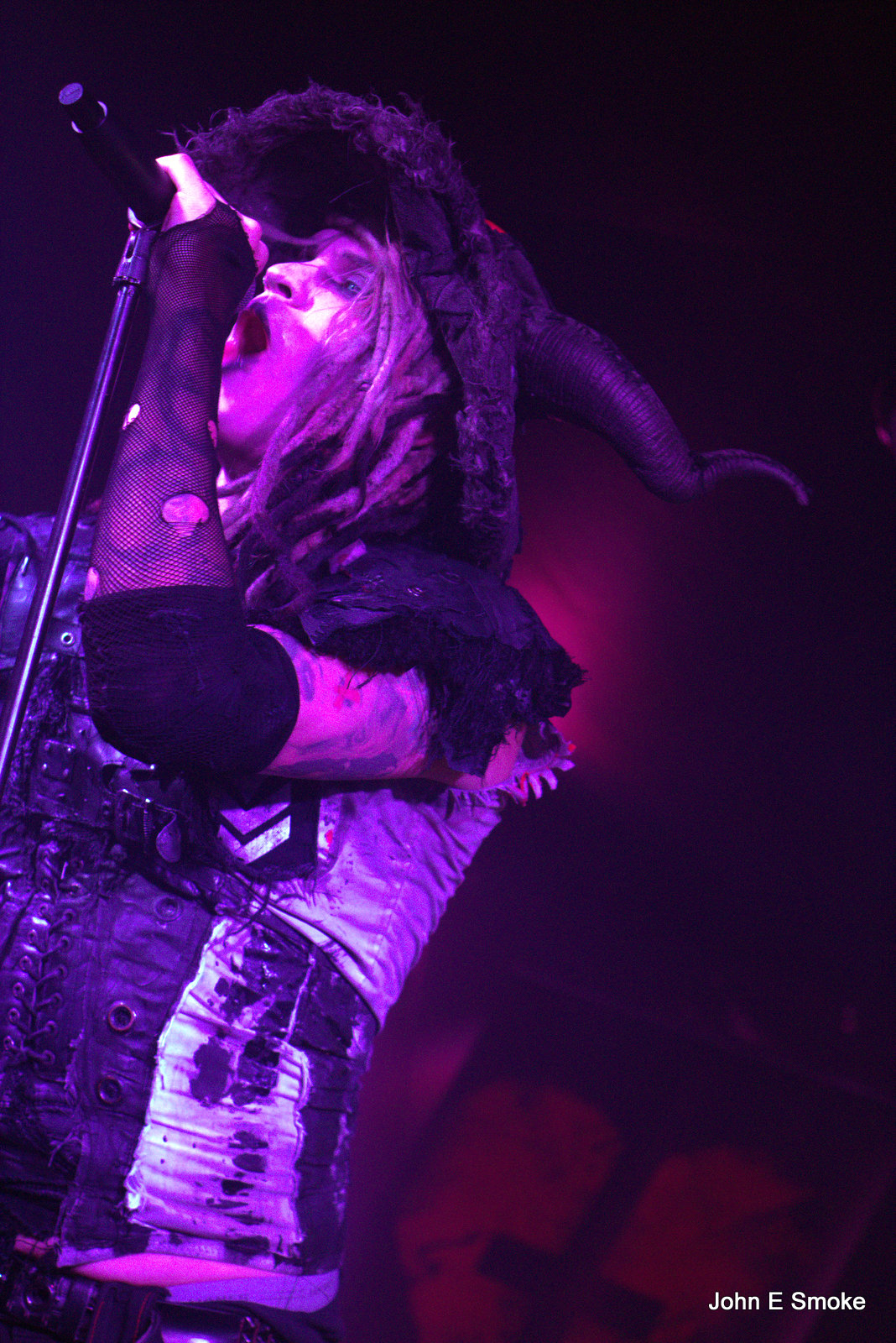 RedRum has firmly planted itself on the small venue gig circuit for the UK as evidenced by the calibre of acts passing through this otherwise tumble weed town. Tonight it is the turn of DAVEY SUICIDE who claim to hail from UnHolywood, Killafornia. Tour support comes from Bournemouth bruisers GRIEVER and two local acts AT DAWN WE ATTACK and DEAD HAPPY.

So, it is somewhat of an eclectic bill, something I always enjoy. DEAD HAPPY are not a new name to me, I’ve played them on radio shows and club nights so it is safe to say I enjoy what they do. However, for the uninitiated I will try to give you an insight as to what to expect should you hear them. Frantic electronic percussion and synths, live guitars, bass and other sounds topped with slightly insane vocals, or, if you will, imagine the mania of Mindless Self Indulgence in a brummy package. Strong frenetic material is delivered by the versatile if somewhat ‘relaxed’ looking bassist, sharp riffs from their neon splattered and wheelchair seated guitarists and their noisemongering helium toned front man. A sardonic sense of humour pervades and entertains , “I didn’t even get chance to change my trousers”. I tried to block my ears during their mid set megamix of 80s and 90s cheese, but otherwise, good fun as always.

AT DAWN WE ATTACK are here to shove lots of metal up your ass. These West Midlands bruisers are clearly known to some of the assembled crowd and the five metallers are clearly hitting their stride musically. They are striding all over tonight’s venue too as clearly the stage cannot confine them. Musically they are not my forte but they are utterly confident, competent and as heavy as heavy thing with their metal/thrash hybrid, a friendly bunch too as they easily engage their audience.

At Dawn We Attack

If the last guys were all beards, dreads and gristle, GRIEVER are the opposite, at least visually. I am left to wonder whether they have their own personal grooming assistant in the tour van, so smooth is their apearance. However, it’s about the music, and precise remains a key word as Griever ply a technical take on metalcore and deliver probably the weightiest riffery tonight. There must be plenty of anger to be found on the south coast as they have brought It up here with them and channelled with a fair amount of emotion. It is delivered well and the guys are earnest in their appreciation for the crowd and the underground scene in general. Again I’m a little out of my genre comfort zone and can’t claim expertise in their breed of sonics but I had my attention held for the duration of their set, as did most of the people in the room.

Which brings us to the headline act DAVEY SUICIDE, not a band I was familiar with before I read the gig listings for RedRum. With a following of a few hundred thousand on social media they have certainly made some waves, and on research it appears they have made these waves through hard work and DIY ethics, and in the face of record label fallouts, which will always get a massive fucking thumbs up from me. Self described as Gutter Goth Rock, these guys have recently toured with Combichrist, Dope and Deadstar Assembly. This tour is named after and in support of their 2017 album ‘Made From Fire’ (their third) and is taking them across Europe, with Stafford part of the UK leg. The band encompass a strong visual element which will feel familiar to fans of the likes of Wednesday 13, early Marilyn Manson and Rob Zombie, a blend of glam, sleaze, grunge and goth. Come to think of it, that pretty much sums up their sound too, with nods to Marilyn Manson is particular though my ears also pick up elements of White Zombie and Stabbing Westward. I make these latter comparisons because DAVEY SUICIDE’s material has that edge, those interesting chord changes that give everything that minor key menace and power that is missing from the material of many bands plying a similar product. Live, as well as presenting a finely honed aesthetic, they are a tight band who deliver a compelling set with energy and sparks. They strut, pout, swagger and thrust with the best of them while dishing out their dirty take on dark/death rock and roll. We even get costume changes from Davey himself, who is quite the entertainer. His performance doesn’t reflect a star on an ego trip though, as he is at ease with the audience, engaging and at time witty. This is further enforced by his eagerness to interact with the audience after the show (a nod to Griever and the other supports for being similarly friendly). Leading tracks from the recent album lodge easily in my earls with ‘Rise Above’ and ‘No Angel’ proving particularly catchy. A quality performance from a band who should be on the radar of fans of any of the bands aforementioned in this paragraph, and indeed anyone who likes their rock music dirty and dark with a fishnet swagger.