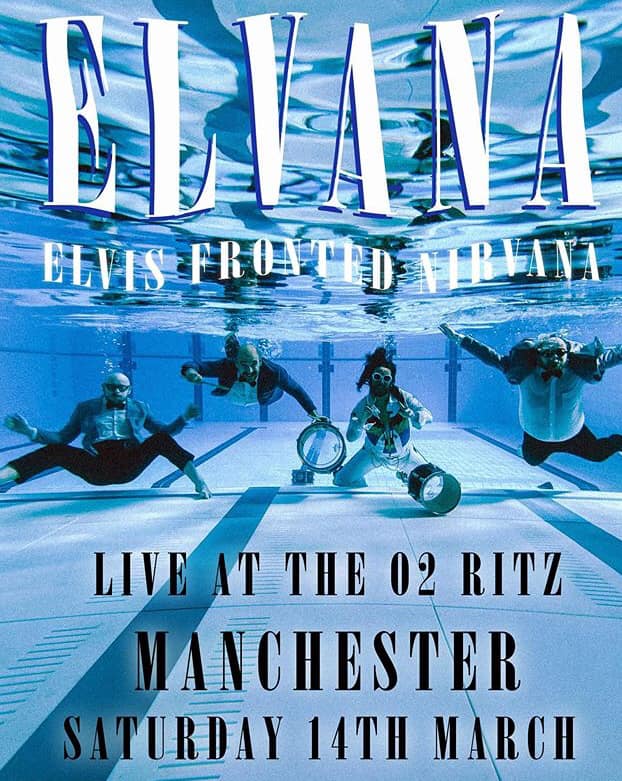 If sadly you are still part of the world’s population that hasn’t had the pleasure of hearing the concoction that is Elvana, they are the Elvis Fronted Nirvana Tribute band that has been missing from our lives all this time! The four piece is accompanied by backing duo ‘Talk Like Tigers’ to perform amalgamations of Presley and Nirvana classics, as well as performing songs of each artist/s in their own right.

On Saturday evening, Elvana were welcomed to the stage following an incredible grunge two piece support act ‘Haggard Cat’ who blew the minds of many in the audience. Taking to the stage with a white V-Guitar and a basic drum kit, no one was quite ready for the sound that they produced! Playing songs off their first two albums, their vigorous performance gave an incredible dynamic to the evening and were definitely a great combination choice as a support. Their two albums ‘Challenger‘ and ‘Common Sense Holiday‘ are both available through Earache Records now.

In spite of all the madness centred around C-19, Elvana carried on with their Manchester gig and performed an outstanding set that truly didn’t disappoint. The lights dim, the disco ball shining and then….The King makes his grand entrance with the most Rock ’n’ Roll version of “Thats Alright Mama” that Presley would have definitely approved!!

These guys knew that all the people who braved the outside world of ‘Manchestershire‘ wanted a show to perform a gig to remember and my god, they gave us one! Their stage presence was bursting with hip thrusts, flared suits, Elvis twangs and tightly played riffs which completely set this show out from any other. Three songs in the crowd was roaring and Elvis took centre stage to give the three most important rules for the next part of the show;

The next 3 minutes was an experience of its own, watching a crowd of Elvana fans start a circle pit to a grunge version of Blue Suede Shoes. Just, epic.

With three costume changes, a ‘Miss World’ Beauty Pageant AND songs that I have wanted to hear live for years, this was definitely pushed to one of my favourite gigs of all time. During the Pageant, we were treated to a number from Stephanie and Charlotte (Talk Like Tigers) who did an amazing cover of Hole’s ‘Miss World’ which separated the show perfectly.

It felt like everything was against these guys to perform; they recently had to cancel a gig in Dublin the night prior, their support was running late (due to issues out of their own hands) and their flight to Manchester was delayed. Despite all of these bumps in the road, Haggard Cat and Elvana still rocked ‘Manchestershire’ Ritz.

If you’ve never seen Elvana before then make sure it is put onto your bucket list for gigs! A must see.

Update: Due to such worldwide issues, Elvana have officially postponed the remainder of their UK and Europe Tour. Follow their Social Pages for further updates;

Don’t forget to catch up on The Rule Breakers Show, Every Tuesday 8-10pm only on MMH – The Home of Rock Radio