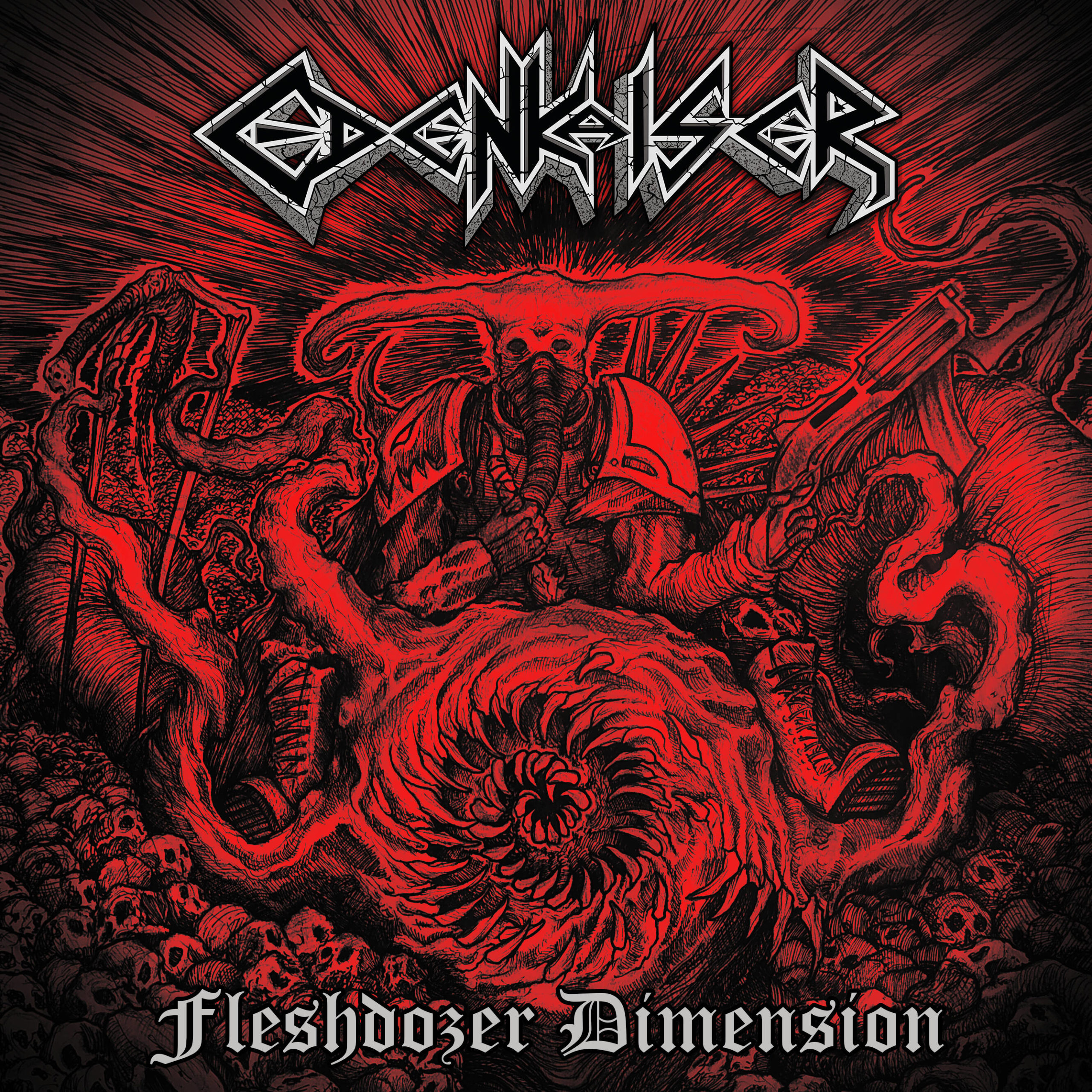 Formed in 2009, Barcelona black metallers Edenkaiser have had a run of albums and releases as they’ve honed their sound over the last decade, complete with lyrics about nihilism, war, conspiracies and anti-religious sentiment. Guitarist Häwkmoon has been the only consistent member over the last thirteen years, with three of this ungodly quartet arriving from 2019 onwards. Fleshdozer Dimension marks, then, a new era of the band with an incredibly raw, unrelenting effort that takes no prisoners, full to the brim with old-school, lo-fi atmosphere and thoughtful lyricism.

Introductory track ‘Revelation V (Intro)’ sets the tone with grinding, industrial noises before a choppy drum fill brings in ‘The Eye of the Blind’ and vocalist Hamramr exclaims that ‘Knowledge dies, blindness reigns’ over a furious blastbeat. The lyrics are unwaveringly unambiguous and very much relevant, discussing the collective’s state of mind and a directionless society with conviction. It’s a great vocal performance, too – Hamramr lets out an impressively long scream just before the song finishes, following a range of instrumental ideas that create a constantly-evolving track. The grandiose, World War Two-themed ‘Burn in the Name of Chaos’ follows. A lengthy buildup sets an epic tone for the track, and a harrowing tale of genocide is told. There’s a few different passages over the eight (or so) minutes that ensue, but one of their most effective is the total drop in instrumentation, leaving a sole, mournful guitar melody over the sound of flames crackling. The band produce a true sense of atmosphere; as energy levels are brought back up again there’s some spectacular drumwork and Hamramr simply screams ‘Burn!’ over and over. It’s unsettling and nightmarish, but a bona fide highlight of the tracklist.

The following two songs are a lot more immediate, both roaring by in less than three minutes each. ‘Slay The Icon’ grinds away at a medium tempo with pounding double bass kicks and a chant-along chorus. Its energy seems to have been crafted specifically for live audiences, and who can blame them? The fairly self-explanatory lyrics will appeal to many longtime black metal fans. An ominous stringed introduction brings in ‘Nemesis in Flames’ before tremolo-picked guitars rip through the speakers out of nowhere. It’s a frantic, blastbeat-fuelled scorcher of a track for the most part, although room is still made for the epic, fist-pumping blackened glory that Edenkaiser have made their own. This sense of grandeur is still taken under a retro, lo-fi aesthetic, though – even the out of tune guitars have a certain charm to them. Fleshdozer Dimension is deliberately imperfect in this sense and deliberately distances itself from modern, overproduced recording ethics. Regardless of which style sounds better to your ears, the ‘classic’ lo-fi black metal sound has its firm and undisputable place in metal history and discourse.

‘Mutant Kult (Return of the Vindicator)’ starts with possibly the most overt nod to thrash metal across the album – though far from the only nod in that direction – before going into fairly familiar black metal territory. Edenkaiser allow the song to evolve and change with ease, never content with over-repeating any one section. In this regard, ‘Suburbia’ is similar, as are some of the preceding songs. Its groove-heavy intro makes way for a more aggressive passage and a section in a different key, even bookended with a little bit of lead bass, although it can feel a little more stop-start rather than flowing and progressive in this particular case. The melodic yet morose clean guitars then set the scene for striking closing number ‘Dawn of the Forgotten’. With marching drum rolls and poignant lyrics about the futility of war – and arguably, an evaluative glimmer of hope as new life and rebirth is hinted at – underlined by simple yet powerful melodies in the bass and guitar work, it’s a mighty closing statement from Edenkaiser. The choice of fading out for this song is hugely effective, as you imagine life slipping away for a soldier in your mind’s eye while the album dies out.

Fleshdozer Dimension is a cohesive effort from Edenkaiser, with songs that twist and turn and a markedly old-school approach to black metal, although the drumming does interestingly go easy on the blastbeats, and there’s more than a hint of thrash or punk in the instrumentation. Hamramr is an impressive lyricist and vocalist, very much pulling his weight at the front of the mix. It’s intense, raw and won’t be for everyone, but Fleshdozer Dimension will be an increasingly rewarding listen for many. Kvlt.