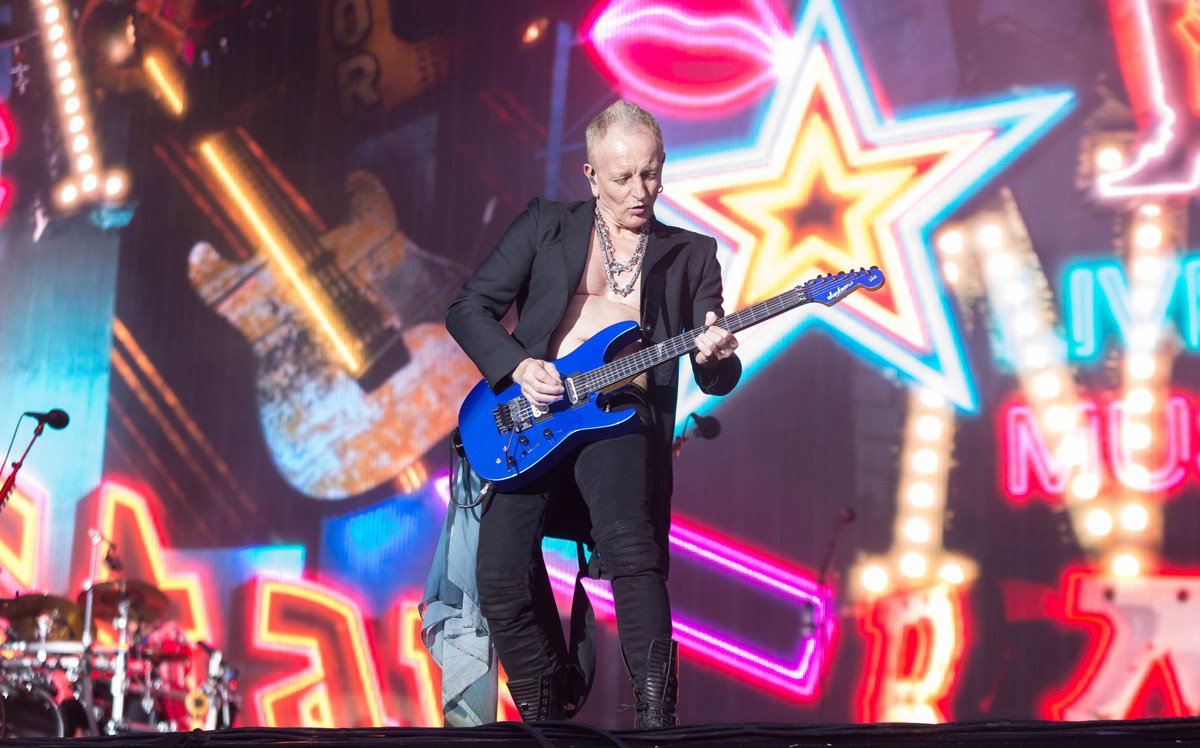 Download Festival 2019. Drownload. Brownload. Downpour. Such nicknames and hashtags were flying around social media before the music had even begun, along with scare stories of people giving up and leaving due to the appalling campsite conditions. The UKs biggest rock and metal festival has become synonymous with bad weather and 2019 was no different. A biblical deluge in the preceding week turned the campsite into a quagmire that threatened to deprive you of your footwear and send you face first into a questionable brown mess with every step. Fortunately, MMH Radio staff are made of sterner stuff, so stuck it out and braved the mud, rain and horrendous porta-loos to see as many bands as possible and let you know whether the music makes it all worth it.

The ‘path’ at the campsite (Photo: David Steed)

Delain come storming to second stage with drum and guitar solos and soon showed the crowd the multitude of talent in this band. The lead vocals, growls and keyboards in particular made this set stand out. Charlotte Wessels is a frontwoman that will not let up, constantly getting the crowd involved with sing-alongs, fist pumps, jumps, and just in general thanking the audience throughout their set. This band clearly loves performing, appreciate people coming to see them, and this very much resonates with the crowd.

Zebrahead are one of those bands everyone has heard of and have a massive crowd filling the tent for their set. This was my first time seeing them and I have to say I was less than impressed. They have a lot of banter between songs, which usually is a good thing, us British love a good banter, but these guys take it too far. A joke about alcoholism is in extremely bad taste, made even worse by an entire song after said joke, that repeated the words “drink” and “download” over and over again. It took a good 5 minutes between songs for this band to actually begin to play again. When they did, the vocals seemed a bit off and the songs themselves were either way too fast or way too slow of a tempo to be enjoyable. I was looking forward to seeing what the hype was, and unfortunately, I discovered that there shouldn’t be any hype at all.

Whitesnake were pretty darn good. The two guitarists bounced solos off each other brilliantly, and David Coverdale gave his all on the vocals. I enjoyed their set even though classic rock is not a genre I generally enjoy, these guys do it that well. However, their age was very visible (sorry guys!) and there’s a point where old men singing sex related rock songs becomes bemusing and downright creepy to watch, and I’m afraid Whitesnake are at that point.

The Interrupters have only been in the ska punk scene for a few years since their inception, but they are the peak of what great ska punk should be. Fun music and sing-alongs galore. The entire band have a lot of energy on stage (thank God because this is a punk set after all), and vocalist Aimee Allen is everything you could want from a punk rock band vocalist. With vocals that have an angry sounding edge to them and a persona that encourages you to have a good time and a dance but also fight the man, their set is pure fun for everyone in attendance.

Main stage headliner for Friday is Def Leppard. So, 42 years after their inception, can they still perform? Hell yeah they can! Once again, I’m not a massive fan of this genre, but they are clearly a band that a lot of metalheads love and they give all they’ve got to their performance. I am normally very dubious about the older generation of rock bands headlining festivals as it is well and truly time to let the younger bands take the big stage, but Def Leppard proved they do still deserve their spot.

The unenviable job of opening the main stage for the weekend fell to Last in Line. Featuring most of the original Dio band, I thought this group would get a bigger reception, but a majority of the crowd were either still waking up or disappointed with prioritisation of original material over Dio classics. Andrew Freeman was visibly frustrated by the lack of crowd response, yet he channelled that into a powerful vocal performance that peaked with a note perfect performance of Dios “Rainbow in the Dark”.

Over on the Zippo Encore Stage the nostalgia for the 80s continued with Skid Row, now fronted by ex-Dragonforce powerhouse ZP Theart. Filling the (now long abandoned) shoes of original vocalist Sebastian Bach is an intimidating task, yet, once a few volume issues were resolved, Theart proved up to the task, doing a fine job of classics such as “Slave to the Grind” and “18 and Life”. At this point the band are basically a nostalgia act, living of the storming success of their first two albums, but their hard-edged take on 80s glam metal still stands strong 30 years later.

For those after some new blood, the Dogtooth Stage then hosted South Wales boys, Those Damn Crows. I last saw them at Steelhouse Festival, and walked away with the same impression as I did then. I enjoyed the harder edged songs, but a few drifted too close to U2 style arena rock for my taste. That said, you can see why they are one of the regular names mentioned in the New Wave of British Classic Rock category. Although can someone please tell their guitarist that wearing a snapback sideways is not a good look…

There was just enough time to return to the Main Stage via the bar in time to catch the modern frontrunners in Southern Rock, Blackberry Smoke. I absolutely adore much of their music (The Whippoorwill and Holding All The Roses are two of the best albums in the genre) but had to admit that their preference for relaxed country vibes over their more upbeat tunes didn’t really suit the main stage, despite the otherwise perfect execution of the songs. Fortunately, the drop in energy was soon rectified by Clutch. A never-ending stream of well received albums is finally seeing a surge in their popularity, and this show undoubtedly won even more fans. There’s something re-assuring about seeing four guys who look just like a random bloke in the pub decided to get up and start playing pull off one hell of a rock show. Joining in with thousands of others to sing along to the gibberish chorus of “Electric Worry” is just good fun, and was the perfect reminder why we come out in all weather to listen to this kind of stuff.

Given that the rhythm section of Deadland Ritual is made up of Geezer Butler (Black Sabbath) and Matt Sorum (Guns n’ Roses, Velvet Revolver) I expected a far larger crowd than they attracted. Then again, no one wants to hear metal classics performed by an inferior vocalist and, unfortunately, Franky Perez just doesn’t have the range or the power to do justice to classics such as “Neon Knights” and “Slither”. Until they release some more original material, they are just a glorified covers band for better bands and projects.

The second side project of a major rock star to feature that afternoon was up next. Slash ft. Myles Kennedy & The Conspirators are at the stage where they have enough fans of their own material to no longer need to pack out their set with Guns n’ Roses covers (although they did close with “Nightrain”). Myles Kennedy particularly looked to be having a great time away from the heavier/darker themes of his day job with Alter Bridge, only giving up the limelight once so that bassist Todd Kerns could lead a performance of “Doctor Alibi” in tribute to Lemmy. Kennedy’s mild mannerisms seem at odds with the raucous nature of the lyrical material, but there’s no doubt he has the voice for it.

I didn’t realise it at the time, but staying for the entirely of Slash’s set meant that by the time I got to the Dogooth Stage to see Jinjer the crowd was so large that the tent was packed to bursting, with the crowd spilling out into the surrounding area. Their reputation seemed to be preceding them, as it was impossible to get close enough to hear, let alone see the band. That probably tells you more than any review would. If, like me, you missed them that day you’ll be thrilled to know that they are touring the UK later this year.

As the Friday drew to a close, punters were left with two choices: to wrap up a day filled with classic rock by watching Def Leppard play their hit album, Hysteria, in its entirety, or, mix things up a bit by going to see the king of horror himself, Rob Zombie over on the Zippo Stage. I went with the latter and immersed myself in an hour of retro horror visuals, absurd lyrics and industrial riffs. The band themselves looked like they were off to a Halloween party or to audition for the next Money Supermarket advert (they’ve got to drop Skeletor eventually…), but it was all part of the fun. “Living Dead Girl”, “Superbeast” and “…F**king in a UFO” all got the crowd going, but of course it would be “Dragula” that got the biggest cheer of the night, wrapping everything up with everyone screaming some nonsense about ditches and witches…

All photographs by AmandaC Photography.