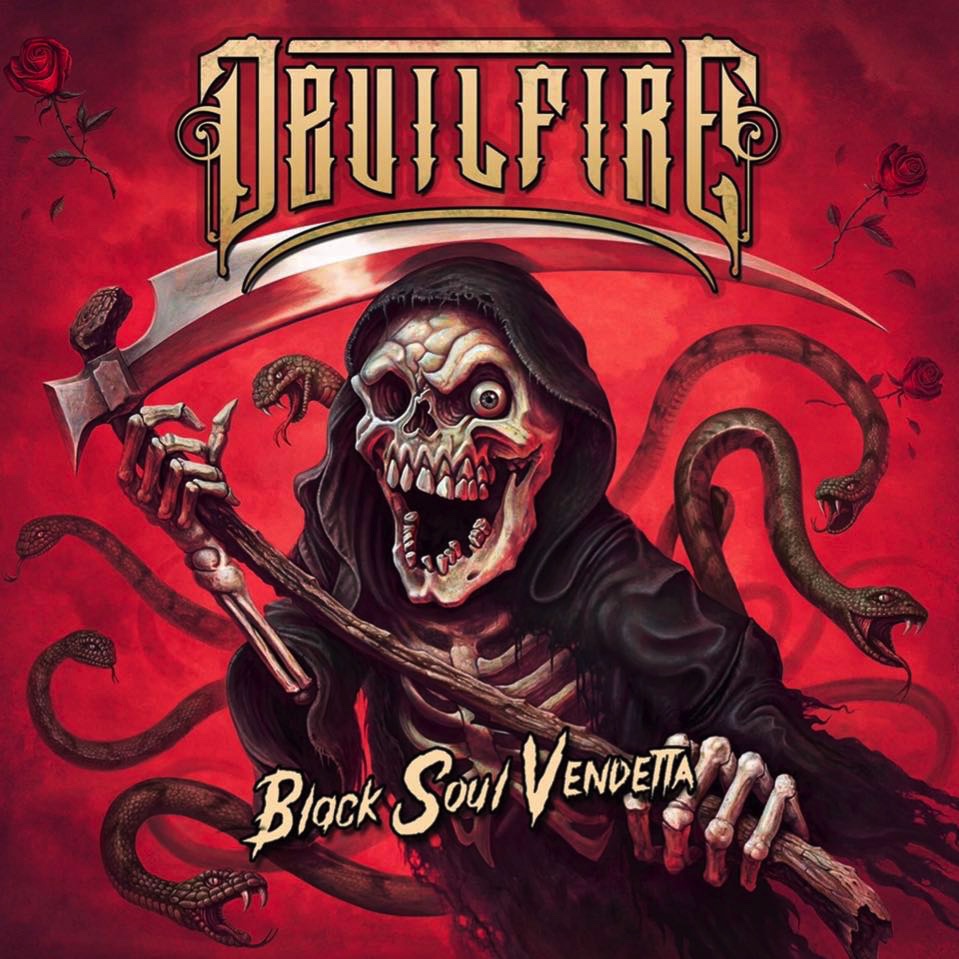 When a young producer and a talented drummer met up by chance in a studio in 2013, they started discussing their ideal dream of a band. Little did they realise that the result of that conversation would be the successful outfit, Devilfire. Finally seeing progress in 2016, Birmingham had its newest melodic rock band, although it took until 2017 for the first album ‘Dark Manoeuvres’ to appear. By then the guys had acquired a long line of followers and 2018 saw a follow up EP ‘Out Of The Dark’ with feedback off the scale with praise. Now in 2020 there is a new album, 13 tracks of original songs mastered and produced by that same young producer, Alex Cooper (Shy, Spike, Quireboys), who fronts Devilfire. They also have that same talented drummer, Lars Wickett, who has played with Uli Jon Roth, among others.

Cruelest Animal – With slinky melodic beat from the start, the crispness of the vocals are intertwined with simple yet racing guitar work. Professional and intricate overall and having such a pleasant tempo, making this the first track was an excellent decision. Chasing The Pain – Came out as a single a while back and features the collaboration of Eric Dover (Jellyfish, Lost Angels, Alice Cooper). Upright, smooth and a sugar rush of a track, it has swirls of energy and low bass strings give it dimension. Again there is a mass of impressive notes and it has a catchy melody that lingers in your head.

Dead Man Walking – This is my favourite number, a building introduction of low and demon like chords is followed by Jazzy AOR, like something Steely Dan would have written, it’s an amazingly technical song, mixed up and having a pumping rhythm. Devilfire surprise me with their consistent and perfectly executed work. Dream Evil – Also brought out as a single and having the most attractive chorus, this is one you can sing along to as its simplicity is the secret that draws you in. ‘You Dream Evil Cause Something Ain’t Right, You’re Dream Evil’s Gonna Kill It Tonight’. Get those heads swaying, as the video is included here for your pleasure.

What You Pay For – Another track with a blinding hook and flowing melody, British AOR at its best. I guess they use additional keyboards to get the desired polish and rich tones, but this is one band that could incorporate a Saxophone or some kind of brass section, during their live sets, for this song especially. Black Soul Bones – This is more of a haunting graveyard type, slower and stickier, it glides along in a sultry mere of inky darkness. I like the change of direction from the last few songs, providing another side to Devilfire and more bulk to the album. Decadence – This is strongly rooted to the anthem and forceful power of 80s rock. Steady drum kick and sheer vocals, mingle with a guitar solo of immense aptitude. Wasn’t It Love? – Is the last track and is purely a ballad. Slow and with focus on a building melody, it is just a beautiful song and one the lights will flicker to at live performances.

This album is a lengthy one at 13 tracks, but they blend well and the writing is quite incredible, also the Devilfire sound incorporates multiple effects, that enrich the end result. All in all it’s a wondrous album and the band should be so proud of it.