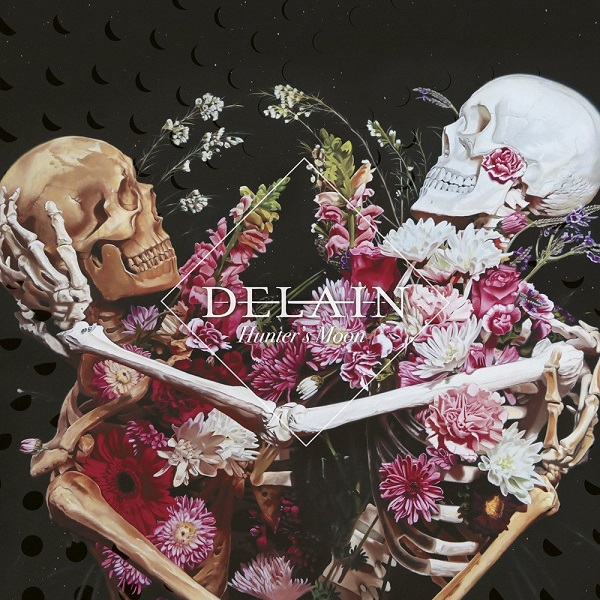 The final part of a trilogy that began with 2016’s Lunar Prelude EP, Hunter’s Moon’s purpose is two fold: to close this particular chapter of Delain’s career, and to look forward as they continue forge their path into the future. Whilst not quite superstars of the symphonic metal scene, Delain are still a name with significant clout, so any new material is always going to be met with a sense of anticipation. The Dutch sextet are well aware of this, and have indicated that the first two studio cuts are intended as a sign of things to come when their next full length is issued later this year.

“Masters of Destiny” is up first, described by the band as ‘dramatic’ and ‘cinematic’. It opens with a delicate, magical melody before Charlotte belts like a siren to introduce heavy, marching guitar chugs. It’s a decent number, but is promptly one upped by the title track, which builds well to reach the crescendo in the catchy chorus. Even the harsh vocals, usually a blight on this sort of music, work quite well on this one, which is a rarity. “This Silence Is Mine” is a curious number, rushing through several good ideas in two and a half minutes, rarely giving them enough time to breathe. In its current form, I think it would’ve been better served as an instrumental, as the vocals sound like an afterthought. Had the song been developed more, I think it could’ve been a winner. The bouncing grooves of “Art Kills” are well paced, although unlike the title track, the harsh vocals are a blot on the copybook here.

The more substantial live portion follows, captured during the group’s show in Utrecht in 2017 (the full show is available on BluRay that comes with the EP). With the release of A Decade of Delain relatively recently, the group have wisely opted to feature some tracks not present on that package, so as not to step on its toes and potentially cannibalise sales. Things don’t start too brightly, as although “Hands of Gold” and “Danse Macabre” are played well enough, the vocals are a little tired. Charlotte Wessels still sounds quite good, granted, but some of those sumptuous chorus melodies fall flat. Still, I’m all for imperfections on live records as long as they don’t severely detract from the experience, so I’m not too bothered, but it may be distracting for some. It’s not until Marco Hietala of Nightwish steps on stage to share vocal duties that the energy really picks up, as if Wessels is grateful to share the burden. “Your Body Is a Battleground” and “Nothing Left” see the two voices gelling wonderfully, whilst “Sing to Me” and infectious Queen cover “Scandal” sound positively massive. “The Gathering” draws the curtain on the show and by then Wessels has really taken flight, taking command as the song draws its final breaths.

Hunter’s Moon should be a treat for Delain fans as they patiently wait for their next record. The studio tracks stay true to the symphonic metal template they’ve become accustomed to, whilst also showing signs of necessary growth to starve off stagnation. The live tracks have their flaws, but overall they’re enjoyable and different enough to supplement 2017’s live release. The EP does exactly what it sets out to do: conclude the trilogy that began in 2016 whilst indicating that there is a prosperous future ahead for the group.

Find out more on Delain here:

Hunter’s Moon is available on February 22nd via Napalm Records, and can be purchased here.