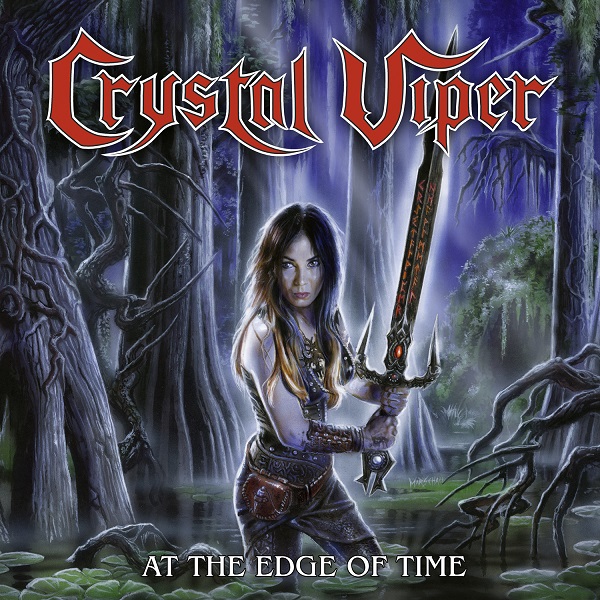 The release of 2017’s Queen of the Witches was one of the most important moments in the career of Crystal Viper (review here). The album not only saw the Polish group continue to deliver quality, no frills heavy metal, but, more importantly, it marked the return of Marta Gabriel to the fold; the frontwoman having suffered with health issues that had left her future as a musician in doubt. Not content to rest on their laurels following Marta’s recovery, the quartet are now treating their fans to the five track EP At the Edge of Time.

The title track leads off and is a concise, catchy and mildly coarse slab of heavy metal – standard sort of stuff as far as Crystal Viper goes. Whilst it’s certainly an enjoyable romp, the song sounds a bit too restrained, as if the band are hesitant to really let loose. This is particularly evident in the drum work, with the basic kick snare beat begging for a little more inspiration and urgency. The mid song break deftly utilises piano and acoustic guitars for a bit of a folky feel, and the roaring lead that follows allows the song to reach a satisfying crescendo with the final chorus. The double kicks in this refrain contribute to said climax, so perhaps the aforementioned laboured drumming isn’t as detrimental as it initially appears, but a more creative percussive approach would’ve kicked things up another notch. The third track on the EP, “Zwiastun Burzy”, is simply an alternative version of this song with lyrics in Polish.

Elsewhere, there’s an interesting take on “When the Sun Goes Down”, one of the promo tracks from the aforementioned Queen of the Witches album. The Giallo version (the moniker likely derived from the 20th century Italian genre of horror/thriller films and literature… or so Wikipedia tells me) makes prominent use of an organ to invoke a sense of peril, which I imagine is what they were going for. “When Are You” is a piano ballad that allows Marta to show off her voice in a more tranquil sonic environment, but the composition itself is weak and lacks memorability. Things end on a high note with “Tell Me Why”, a cover of the Quartz track that dates back to the early ’80s. It’s a little harder and faster than the original, but it remains largely faithful to the source material. The band sound in their element as they effortlessly cruise through four and a half minutes of heavy metal heaven, and, like the title track before it, you’re reminded just how good this group can be.

All in all, this is a decent little EP that fans of Crystal Viper are bound to enjoy. I wouldn’t say it’s essential listening, but the title track and the Quartz cover are great little numbers, with the Giallo reworking also being a nice spin on an older song. All being well, this release will ultimately serve as an enjoyable way to plug the gap ahead of the groups’ next full length, which is hopefully not too far off.

Highlights: “At the Edge of Time”, “Tell Me Why”

At the Edge of Time is available now through AFM Records, and can be purchased here.