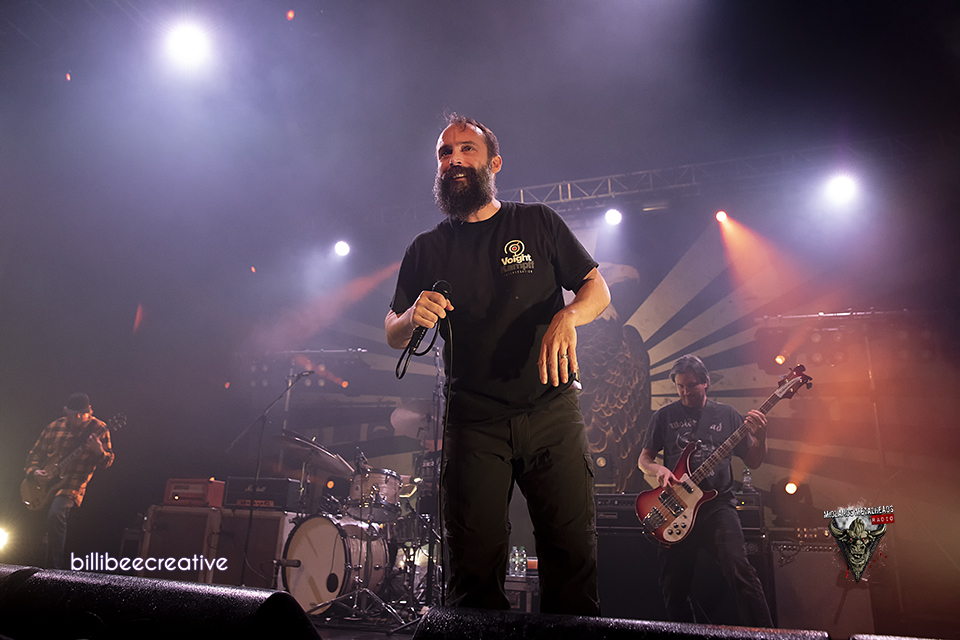 Looking from left to right there’s one aspect within the audience that’s noticeably prevalent.  Beards. Long, short, coloured and grey, all identifying with the collection of testosterone infused rock that’s about to be unveiled on stage.

The Inspector Cluzo are without a doubt, a fantastic opening band. Bedecked in a waistcoat and suit, the French duo go beyond their suave appearance and deliver a fusion of acoustic melodies and adrenaline fuelled rock n roll. When frontman Malcom Lacrouts and drummer Phil Jourdain are not firing their material on stage, they spend time on their organic farm in Gascony raising geese. This quite literal down to earth approach shines through in We the People of the Soil, showcasing Lacrout’s beautifully emotional vocals that convey their intrinsic pride of having a connection to the countryside.

Set concluder Put Your Hands in the Air, demands full audience participation with Jourdain rising from his drum kit and surveying the scene before him with arms outstretched. With one final shriek of “Put your hands in the air, we’re Inspector Cluzo!”, the duo explodes into an outstanding instrumental battle of riffs and drums. With Lacrouts facing Jourdain, the two feed off each other’s energy in a relentless display of hard rock fury, Jourdain’s kit reduced piece by piece until only a few drums remain.

As the audience screams with waves of applause, The Inspector Cluzo are a tough act to follow.

Opening with a softer blues touch with PCH Diamond, it takes a while for the audience to warm up to The Picturebooks. However, this did not detract from their well-crafted brand of rustic rock, a soundtrack to outcast lifestyles and Harley Davidsons roaring down Route 66.                                                                                       Hailing from Germany, frontman Flynn Grabke and drummer Philipp Mirtschink superbly perform their blend of blues and alternative rock, Grabke radiating charisma with a Cheshire cat grin frequently creeping out from underneath his beard. With the set predominately focusing on material off 2017’s effort, Home is a Heartache, the duo exhibits their material with indisputable passion which slowly diffuses amongst the audience. Wardance inspires a selection of grooving, with one woman in the audience stomping along to the beat of the drum, mouthing every word with that particular type of joy that only comes with seeing favourite songs performed live. Launching into Zero Fucks Given, the chorus is admittedly simplistic yet undeniably effective when chanted live as members of the audience raise their middle fingers in the air, beers sloshing from side to side in the cathartic wave.

Culminating with the brilliant coupling of The Rabbit and The Wolf and Your Kisses Burn Like Fire, The Picturebooks urge the audience to come to their next show in May at Birmingham’s Asylum venue. Although when considering the impression these two individuals have made, little incentive is needed to sway the audience into seeing them again.

Its refreshing to witness such professionalism and class from the supporting bands, both consisting of two members only, simply excellent to witness for the powerful music they manage to create.

Following in the same vein, Clutch walk onto the stage with no airs or graces, no dramatic introductions or theatrics.

The music does the talking and what a hell of a speech it makes.

Opener Weird Times is a quintessential example of the consistent quality of 2018’s Book of Bad Decisions, the audience immediately captivated by those infectious grooves that Clutch perfectly conjure in their playing.

Refusing to restrict themselves to the same setlist every night, Clutch vary the songs played at each gig, fans unable to rigidly predict which tracks will be perfomed. Although the band naturally showcases material off their new album, fans are treated to older classics such as Texan Book of the Dead and Power Player, integrating seamlessly into the set.

A reminder of Clutch lacking illusion or grandeur, their down to earth nature seeping through with every genuine instance of connection with fans.

How to Shake Hands translates perfectly live, its comedic lyrical content of becoming President rejuvenated through Fallon’s entertaining stage presence. Once cautiously viewed by fans as differing in style, it’s arguably worthy of being a consistent part of the band’s live repertoire.

Within the middle of the show, Fallon reassures the audience that they’re not going anywhere yet, joking that they want to postpone the tragic dining at Greggs before departing from Heathrow airport.

After an excellent performance of H.B is in Control, Clutch transition into material off the Psychic Warfare album, with Firebirds! immediately followed by Decapitation Blues. There’s such an infectious energy to these songs as guitarist Tim Sult provides their trademark bluesy fuzz through his melodic solos.

The encore is simply perfect as the band gently ease into The Regulator. Atmospheric and worthy of evoking images of travelling through deserted American plains, the performance is nothing short of beautiful.

There’s no possible description that could capture the extent of pure excitement that erupted when the first notes of Electric Worry were played. The reaction to the build up of the verse and chorus was celebrated through an assortment of jumping and dancing alongside a confusing mosh pit emerging in the centre of the crowd, providing a disjointed mixture of shoving and boogying. Either way, each member of the audience grooves in their preferred style to the bluesy tones of one of Clutch’s most beloved tracks.

Concluding with the dynamic Sci Fi preaching X Ray Visions, Clutch complete their final show of 2018 with resounding applause. For a band that have been in the rock circuit for 27 years, they are far from waning into retirement anytime soon. Clutch symbolise pure integrity and hard work, counteracting the reappearing outside opinion that rock is dead.

All three bands tonight emphasise that the genre is very much alive and kicking. You just have to look under the surface of the mainstream.

Photography by Lisa Billingham, full gallery of Clutch can be found here