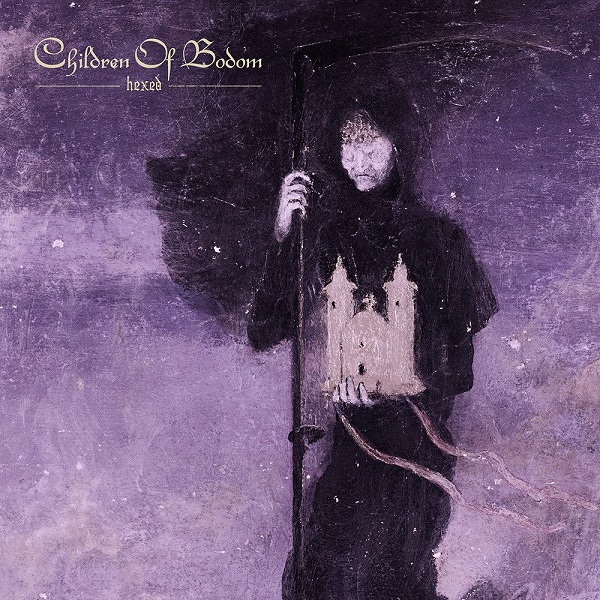 For many Children of Bodom fans, 2015’s I Worship of Chaos was a step down from the marvellous Halo of Blood, which was seen as a return to form after a lull that stretched back as far as 2005 (depending on who you asked). Hexed has been a long time coming, in Bodom terms at least, arriving three and a half years after its predecessor (their longest gap between studio albums), and several months after it was actually completed. Quite why Nuclear Blast stuck it on the back burner for so long I don’t know (avoiding release schedule clutter is my best guess), but it’s finally here to be consumed in all its chaos ridden glory.

“This Road” gets things rolling, and it’s a familiar path for Bodom as it rocks along like the better tracks from Halo of Blood, stopping off in Blooddrunk territory with its obtuse chorus melody. Unlike much of the material from Blooddrunk however, this works well, and it’s good to see them going for a less obvious hook for the refrain. “Under Grass and Clover” pulls off in the other direction, as it is all about the sugary melody, and it won’t be long before it’s dancing around in your head for hours on end. Alexi Laiho utilises effects on his vocals not too dissimilar to those found on 2011’s “Was It Worth It?”, with the similarly sparse verse giving the more substantive parts more emphasis. “Glass Houses” then proceeds to flatten everything in sight as it steamrolls along with the might and magic of Hate Crew Deathroll’s best, and at this point you’re beginning to think you’re strapped in for one hell of a heavy metal ride. The so-called creepy keys of “Hecate’s Nightmare” continue to show this promise, and I can’t help but think of a mid ‘90s DOS based shooter when I hear them (that’s not a bad thing by the way). Unfortunately, the song doesn’t build on this wonderful potential, and whilst it’s by no means bad, the instrumental work comes off as half baked after the three preceding tracks.

From here on out the album is a mixed bag. There’s plenty of fire in the thrashy “Kick in the Spleen”, but aside from a nice key motif from Janne Wirman, there’s nothing much to write home about. “Say Never Look Back” stutters in fits and starts too much to get any momentum going, in spite of some neat, snaking melodies slithering amongst the riff work, whereas “Relapse” has a Kalmah-esque mystique that is shattered by a riff that mirrors Blooddrunk‘s dreadful “Done with Everything, Die for Nothing”. A re-recording of 2004’s hidden gem “Knuckleduster” pushes the guitars to the forefront at the expense of the keys and melodies, but lacks the abrasiveness that made the original work so well. The solo stays fairly true to its source, but little changes in phrasing here and there see it lose that special something that had made it one of Laiho’s greatest leads. I can’t say that much of the lead work on the album is that great to be honest (comparatively speaking… I hold Laiho to a very high standard), which is a disappointment as I thought, at the time of release, I Worship Chaos had some of his most inspired solos of the past decade or so.

On the up side, the title track is superb, with some thrashy melodeath riffs and an excellent, old school melody leading into a bruising, tremolo driven chorus. I can see this being a particularly punishing live number should it pop up in the setlist. Elsewhere, “Platitudes and Barren Words” has the sort of rolling grooves and harmonies that would make it at home on Are You Dead Yet?, whilst the thumping, mid paced march of “Soon Departed” is a fine example of less is more, nailing a bigger, epic, almost euphoric chorus that is unlike anything else that I can recall from Bodom (off the top of my head at least). On the performance front, Jaska Raatikainen again proves why he is indispensable to the group; his smooth drumming allowing the music to maintain a degree of continuity and flow for much of the record. Wirman, who I feel has been underused to varying degrees for about 15 years now, also adds plenty of texture when given ample opportunity, whilst also showing some nimble fingerwork in his solo spots. I can’t say any of the members are anything less than good (newbie Daniel Freyberg slots in with the minimum of fuss), but these two stood out.

At this point it’s compulsory to state that no, this is not in the same league as the first four records. Chances are no new Bodom album ever will be. With that out of the way, Hexed does no disgrace to their catalogue. There are some weaker moments, but there are no bad songs, and the ones that are good, are seriously good. With a palpable enthusiasm and energy that runs through the album, along with some intriguing new territory covered, Hexed is a statement both for now and for the future: Children of Bodom are alive, still kicking ass, and will be for some time to come.

Find out more on Children of Bodom here:

Hexed is available on March 8th via Nuclear Blast Records, and can be purchased here.