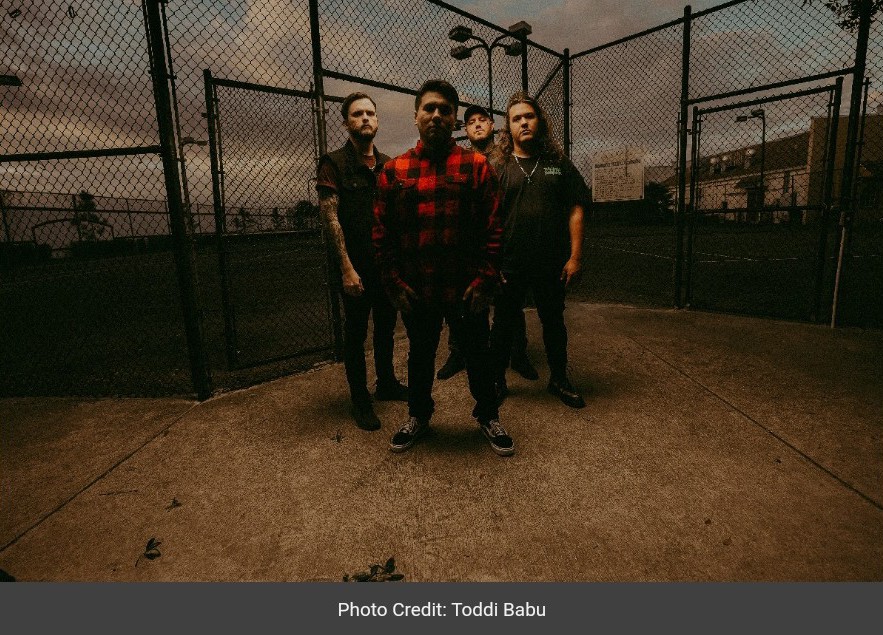 An epically unashamed demonstration of aggression, Bodysnatcher’s music is dark, furious, and threatening. It’s a sound born from the burden of struggle and an unwavering commitment to continued survival against all obstacles.

Bodysnatcher put the ‘core’ back in deathcore. Bleed-Abide, the Florida band’s third album, crackles with rage and power.

Comments vocalist Kyle Medina, “Bleed-Abide is the ultimate culmination of what the band has been building for years, and I believe the best material to date. The instrumentals have matured and become heavier hitting and the lyrics dig deeper personally and more relatable than even This Heavy Void. There is something for everyone in this album: slam riffs, breakdowns, two steps, choruses that stick…”

“This album means more to me than any album I have ever been involved in,” adds drummer Chris Whited. “We all love [last album] This Heavy Void, but we weren’t the well-oiled machine that we are now. We know exactly how we all write together and what we are capable of now, and this album fully shows it. Every one of us put hours upon hours into this album throughout the pandemic. Hearing it all come together as one cohesive piece is amazing. I’m so proud of my brothers. This is the album I have always wanted to put out.”

Today the band unleash their new single ‘E.D.A.’. “The song is about the feelings I dealt with from my mom’s passing,” elaborates guitarist Kyle Carter. “It talks about how I felt robbed and didn’t even know the real person she was because I was only twelve when she died. It talks about how it feels like her death has defined who I am in so many ways, but I don’t even remember her fully. It’s a tough subject for me even still, and it’s very frustrating and confusing. I feel very strongly about this song, and I hope it helps anyone who might feel a similar way.”

Coinciding with the release of Bleed-Abide, Bodysnatcher will join Dying Fetus for a month-long Spring tour across North America, with Chelsea Grin, Frozen Soul, and Undeath.

Bodysnatcher will support Ingested on their UK tour. Dates as follows:

Kyle Medina (vocals), Kyle Carter (guitar), Kyle Shope (bass), and Chris Whited (drums) embody the hardcore spirit and cut their teeth in their tight-knit Florida community, home of death metal and pioneering punk, hardcore, and power-violence bands. Bodysnatcher are monikered after the nickname of one of history’s most notorious serial killers, Ed Gein, and represented by a triangular symbol steeped in alchemy and the occult. But Bodysnatcher lyrics owe more to the horrors of domestic strife than the gore of their Florida-based forebearers in Cannibal Corpse.

The inception point came with the purest of intentions. “I was around seventeen,” Medina explains. “We were just going to be a band that was basically a ‘breakdown band’ for my friends to mosh to.” Eventually stabilisng with a line-up that overlapped at various points with beloved groups like King Conquer and Dealey Plaza, Bodysnatcher released a quick succession of albums and EPs, most notably Abandonment (2015), Death Of Me (2017), and the utterly crushing This Heavy Void (2020). Combined with a blistering live show, this led to a deal with the MNRK Heavy label.

Bleed-Abide is the darkest offering yet from Bodysnatcher, burning with an intensity derived from a further focus on sonic pummeling and truth-telling narratives. “Even as a pissed-off teenager, the first songs I wrote were about personal experiences and people who did me wrong,” Medina says. “The musicianship is more mature; there are still a lot of breakdowns but done in a much smarter way. It’s definitely still Bodysnatcher. It’s like Bodysnatcher on steroids.”

All of the guys contribute to the lyrics, resulting in multiple points of view and diverse insights anchored by common themes of catharsis and resistance. ‘Absolved Of The Strings And Stone’ is a battle cry against the gaslighting and emotional abuse of toxic people. ‘Hollow Shell’ delves into strained familial dynamics, where some family members live as virtual prisoners to others. ‘Wired For Destruction’ confronts death anxiety. “It’s about the fear of the unknown, how all of us will move on,” says Medina. “Are we just going to return to dust? Are we just forgotten?” Even amidst the uncertainty and darkness, there’s an underlying positivity to be mined within. ‘Value Through Suffering’ takes a proactive stance on hardship, a way to rebuild from the wreckage. Too many bands resist genre classification in an aloof effort to distinguish themselves from every other band, inadvertently consigning themselves to talking points that sound like everyone else. Bodysnatcher is, without apology, a deathcore band. There is no compromise in the cards. “Deathcore kicks ass. A lot of bands shy away from labels they don’t deem ‘cool’ enough. But we don’t give a f*ck,” Medina says proudly. “We like what we like, and we play what we play. We all love hardcore and metal, so we’re going to play hardcore, play metal, and play breakdowns. And that’s how the band is going to be, forever.”