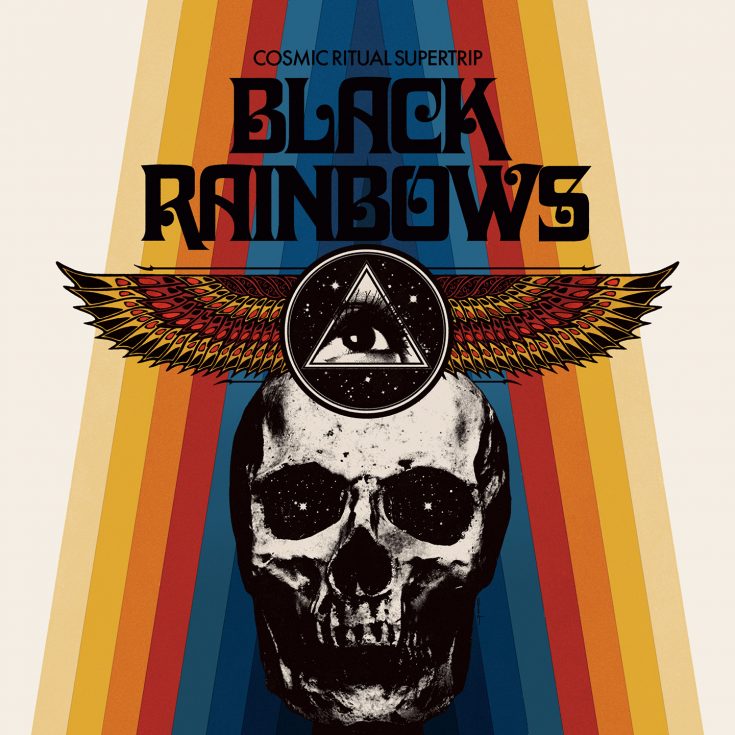 With psychedelic fuzz and stoner rock at the helm, Black Rainbows merge 70s tones with the stoner rock vibe that came wafting onto the scene in a mist of green smoke in the 90s. Think Fu Manchu with the attitude of the MC5. With Cosmic Ritual Supertrip, the Italian fuzz trio are back with their solid formula, their 8th album since their conception in 2007.

The album artwork alone perfectly matches the album with that distinct vintage colour palette. The skull and wandering eye wouldn’t go amiss on any biker gangs leather jacket whilst the album itself provides an essential soundtrack to Harley Davidsons roaring down the highway.

Opening with At Midnight you Cry, there’s a twenty second slow riff and drum build up that allows time for that classic distorted fuzz to truly permeate the atmosphere. The song then kicks into speed with one hell of an intoxicating riff and vocal line. With a quick clean solo before sliding into the main riff once more, it’s the perfect single and opener to truly draw the listener in.

With at Midnight you Cry, you get a quick and catchy example of stoner rock that is fairly accessible. Universal Phase however turns the dial down and opens with a gloriously slow and trudging doom riff that encourages thoughts of deserted apocalyptic plains. The full song follows in much the same vein with radio voice overs revealing the appearance and destruction of an alien ship. This accompanied with the heavy chugging riffs and far away vocals is a recipe for a track of truly hypnotic proportions.

Back into the realm of the 70s with Radio 666, ominous aliens are replaced with thoughts of black Mustangs roaring down route 66. Or route 666 if you prefer a dash of the Occult. I’m a big fan of the German trio Kadavar whose material practically reeks of retro psychedelic and stoner rock. Black Rainbows are definitely the Italian counterpart with their high wavering vocals and heavy melodic riffs. Radio 666 is a fantastic song and single, demonstrating how Black Rainbows can shift in tone yet they’re still integrally heavy.

Isolation opens with bluesy guitar work and slow drum beats, mid-tempo until there’s another hit of a chugging vibrato infused riff. The vocals here are particularly cool, soaring into high tones amongst the distortion. But going back to that riff again, good god almighty does it make the head bop and groove.

Hypnotized by the Solenoid is softer and trippy, almost a muse for a yoga cult. In true Black Rainbows style they increase the power half way through with another fuzz attack. That ending solo just slides in from nowhere and legitimately gave me goosebumps on first listen, the synths looming and rising in the background and blending seamlessly with the guitars. Prior to this point I didn’t fully believe in the title Cosmic Ritual Supertrip but that ending alone purely embodies the concept.

With a brief psychedelic interlude with The Great Design, Master Rocket Power Blast is the song to listen to if nothing else. Seriously. It’s a full throttle trip from start to finish. Think Motorhead if Lemmy had discovered the fuzz pedal. And received a sudden kick in the balls. The main riff has been in my head for days and has certainly made basic lockdown life more energetic and enjoyable.

Snowball is another great stoner track, ending with a slow bluesy melody and gentle drums, providing a softer dimension. Glittereyzed follows another unbeatable formula of slow and atmospheric before exploding into another crushing riff, rather like the ambience and heaviness of following track Sacred Graal.

Searching for Satellites Part I and II begins with acoustic guitars accompanying isolated vocals. This then unexpectedly shifts into a 1960s-esque acoustic jig with a jingle of a tambourine and sci fi synths. It’s a refreshing shift and relaxing to listen to.

Album concluder Fire Breather opens with another voice over about a big bird and a repeated “my vinyl is stuck again” line of “it’s a sign that you’re gonna die, real soon.” With this ominous telling, the song goes forth into another classic fuzz chug which propels the lyrical content of the looming threat of a dragon. There’s more voice overs and sci fi synths, the latter of which I can’t get enough of but I understand for others this may be a bit repetitive.

Cosmic Ritual Supertrip lives up to its name. It’s an amazing journey yet the first half is admittedly stronger as a whole. There’s many a time when a song will be slow and then kicks into another faster fuzzy riff. This may annoy some people but I think it works well as there’s such a rich variety across the full album. You only have to listen to openers At Midnight You Cry and Universal Phase to get a gist of Black Rainbows’ ability to evoke different moods whilst staying true to their stoner rock brand.

It’s easy to forget that Black Rainbows only have three members as the sound is nothing short of immersive. Immense riffs, strong drums and great vocals.  What’s not to like?

Black Rainbows are a part of Heavy Psych Sounds Records.