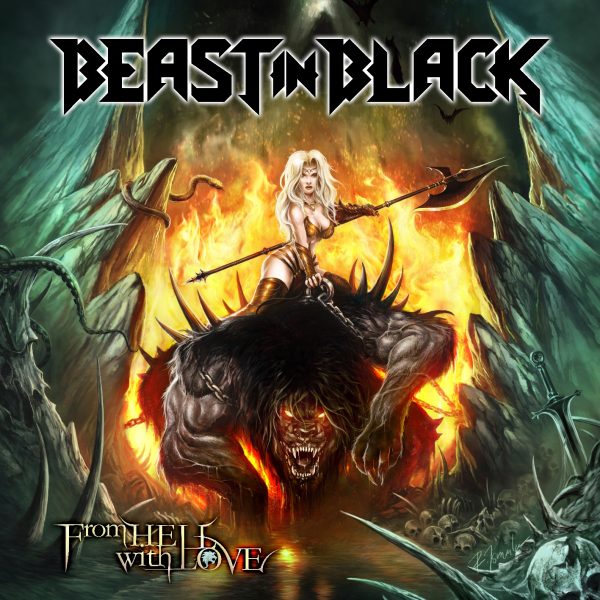 Whatever your thoughts on Europe happen to be, there is no denying that they do power metal with an amount of flair that other parts of the world rarely match. When Beast In Black emerged from the shadow of Battle Beast in 2017 (the former was put together by guitarist Anton Kabanen, founding member of the latter) they planted themselves firmly in ‘Eurovision metal’ territory, and their infectious melodies garnered praise from some high profile musicians, including Tuomas Holopainen (Nightwish) and Kai Hansen (Helloween, Gamma Ray). Will their second album do the same?

No atmospheric and scene setting introductions here, the album launches straight into the main riff of Cry Out For A Hero with an almighty bang. You can’t help but get caught up in it from the off, and you’re soon nodding along to its comfortable mid-tempo rhythm and singing along to the guitar line. The chorus is the first of many that utilises so much vocal layering that, if it were done live, you would need the population of a small country to pull it off: such is the ‘big’ factor that Beast in Black are going for. While melodic and gloriously anthemic, it doesn’t take long before many of the choruses start to become interchangeable. When you use a similar tempo and vocal pattern for most of your songs this is unavoidable. Each one is just a subtle variation of theme, the exception being Oceandeep (the token ballad/slow song) and Repentless, which sounds a little too similar to the likes of End Of All Hope and Wishmaster (both Nightwish). The rest are all danceable mid-tempo tunes that sound like a combination of 80s glam/power metal and S-Club 7.

The choruses aren’t the only part of the song to suffer from fatigue due to repetition. Every aspect is turned to eleven in an attempt to make it as epic and glorious as possible, from the layers of synths and guitars to the regular piercing screams from vocalist Yannis Papadopoulos. However, as Syndrome rightly pointed out in The Incredibles, “when everyone’s super, no one will be”. The same can be said of music. When every song is jammed full of the same features, those features lose their impact. The likes of Sweet True Lies, Die By The Blade and True Believer are all pretty interchangeable. Don’t get me wrong, any metalhead would get excited hearing these songs individually. They are insanely catchy, with the riffs, melodies, and overall production polished to a fine sheen. But when they are all put together the rigid adherence to a formula clearly shows and rapidly becomes wearing.

From Hell With Love is much like a Dwayne Johnson film: it offers a tonne of fun in a short period of time, yet is superficial and its impact is significantly lessened the second time round. After a couple of listens there weren’t many tracks I felt like returning to, mainly because most songs didn’t offer anything different or extra to my favourite few. Power metal has seen some strong releases in the last year from bands like Powerwolf, Brothers of Metal and Warkings. While the debut album from Beast in Black could have stood shoulder to shoulder with these albums, this second release has significantly narrowed their vision. The songs may not have suffered for it, yet the album as a whole most certainly has. It may have come from hell with love, but as far as I am concerned hell can have most of it back.

Highlights: Cry Out For A Hero and From Hell With Love.

From Hell With Love is released on Friday 8th February 2019 via Nuclear Blast Records and can be purchased here.