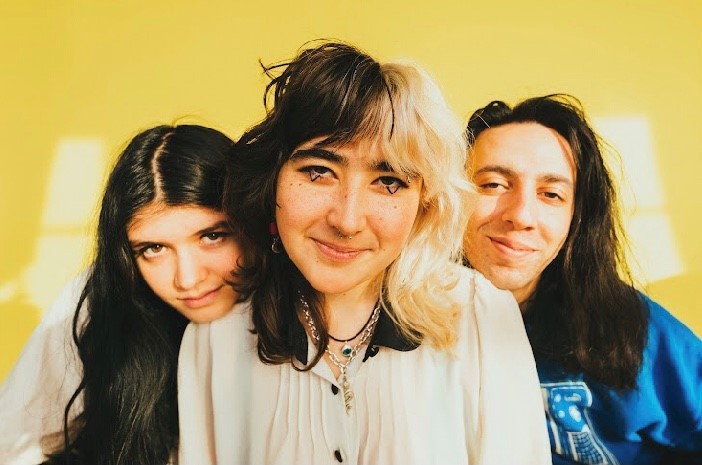 Signing with inclusive record label Hopeless Records last year, Destroy Boys, a California-based three-piece band are ecstatic to be launching into a new direction of their musical careers, and so, I thought it was time to honour this new stage in the band’s life by writing an introductory piece.

Founded by Violet Mayugba (guitarist and singer) and (lead vocalist and guitarist) Alexia Roditis in 2015, these individuals knew that they wanted to form a band at the age of 15 years old, after attending gig after gig across the Sacramento music scene. Completing the trio is drummer Narsai Malik who joined them in 2018. With over 120 million streams and counting, Destroy Boys’ fanbase is growing and expanding every day, with fans ranging from heartbroken teens to Green Day’s very own Billie Joe Armstrong.

With influences such as Siouxsie and the Banshees, The Growlers, and Vampire Weekend, Destroy Boys have a unique sound, which has developed and progressed over the last 7 years into a sound that they now appear genuinely comfortable in.

Destroy Boys feel strongly that the importance of being inclusive to “women, queer people, people of colour, and differently-abled people in all aspects of the music industry” is essential, and the band’s aim to be an active part of this change is one of the many reasons they ought to be listened to, and deserve to have their audience grow.

Releasing their newest album in 2021, ‘Mouth Open, Heart Open’ captures exactly what the band are all about. Sounding more and more polished and comfortable with each album/EP they release, this album shows clear progression when compared to its antecedent, ‘Make Room’.

The first single released from their newest album (‘Mouth Open, Heart Open’) is ‘Muzzle’, a cathartic, energetic garage punk tune, bursting full of anger, empowerment and ownership. At just over a minute long, this song gets across its message quickly and effectively, summarising Mayugba’s past devastation and mistreatment; but also, seemingly, allowing her to come to terms with her past traumas and regain autonomy and power over the experience.

The second single released from the album is ‘Drink’, an honest, raw song, that tackles addiction and the way in which it can run in families. This punk-rock tune was written very personally by Roditis, detailing some of the specifics of how alcoholism/addiction can evolve; for example, fending off loneliness or feeling less misunderstood.

Other singles of the album include ‘Locker Room Bully’, ‘All This Love’ and ‘Escape’, all of which are positioned effectively in their respective placements on the album; and contribute to the overall intended values to be put across by the album and the band; a message of reclaiming power and bodily autonomy.

Destroy Boys should not only be listened to for their musical skill and talent, but for their ethos, and enthusiasm to make a difference in the industry through their music. They are exactly what a punk band should be. So, head on down to their website, and stream/purchase ‘Mouth Open, Heart Open’, if you want true, honest and authentic punk rock tunes; as well as contributing to the necessary changes within the music industry that Destroy Boys intend to encourage.

‘Destroy Boys have a unique sound, which has developed and progressed over the last 7 years into a sound that they now appear genuinely comfortable in.’

Highlights: Muzzle, Drink, All This Love

Mouth Open, Heart Open is available via Hopeless Records from 8th October 2021 and can be purchased here and on all major streaming services.