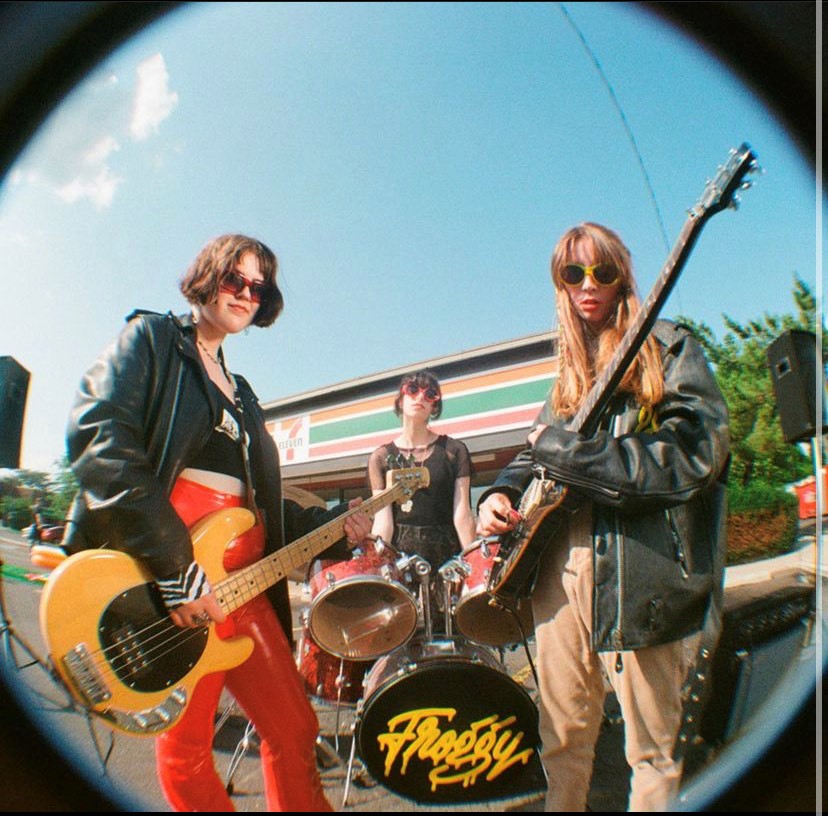 Forming their band in 2020, Froggy are a new, up-and-coming, three-piece punk band from Philly, Pennsylvania. These young, talented individuals are Morgan (vocals and guitar), Brooke (bass and some singing) and Fiona (drums). Having begun to make their mark in the US, I figured it was time to interview them, and introduce them to any potential new UK audiences that could be awaiting them!

Thanks for taking the time to talk to us at MMH Froggy!

Charlotte: How long have you guys been playing together for? How old were you all when you started?

Morgan: We have been playing together for a little more than 2 years. Brooke and I were 16, and Fiona was 15.

Charlotte: What sort of challenges have you guys faced within the music industry?

Morgan: We’ve faced a lot of challenges, but really have two main ones. One of them is the harassment we get as femme individuals. People of all ages, all approaches, it’s unfortunately so common for any femme music act. We try to bring a lot of awareness to the problem to call out and remind specific people of this. The other one is men or older people mansplaining or thinking we’re incapable of doing things and thinking they have the right away to just do them for us. We’ve had people harass us for not wanting to play their gigs, people carrying things without permission, tried to represent us without permission and expected us to follow, people giving us unsolicited advice as if we never have played a gig or recorded a song- there’s a fine line between being polite and trying to help and just barging into our situation.

Charlotte: Who/what are your biggest influences as musicians?

Morgan: I love the analogy I have discovered for our influences: all of our influences are bits and pieces of everything we’ve ever played as musicians, and I think it’s very cool. Some notable acts are L7, fugazi, Rage against the machine, dead milkmen, and Bikini Kill.

Charlotte: Do you have an album coming out any time soon? If so, when?

Morgan: We have an album coming out on August 1st! It’s called Harmburger, and has 8 songs. It’s on all platforms, please check it out!

Charlotte: What is your favourite song that you have written? Does this differ according to any particular factors?

Brooke: For me it’s Jimmy’s song, it just means so much to me and came from a very pivotal part of my life, it’s also a lotta fun to play. Usually! But regardless we all usually have fun playing whatever, sometimes audience reaction to songs makes us like something more.

Charlotte: If you could collab with any band/artist, who would it be?

Brooke: The Dead Milkmen! They are my heroes and the sweetest dudes ever. It would be a bucket list item for us to collab with them.

Charlotte: What is your favourite aspect of the music industry? Why is this?

Brooke: Meeting fans and other bands is my favourite!! Everyone is always so sweet and it is always fun to make new friends.

Charlotte: How does it feel when people say you have inspired them?

Brooke: Whenever anyone of any gender really says that we inspire them no matter how much talent they have it is super heart-warming and inspires me, frankly, and makes me want to keep writing so we can inspire and help as many people as we can! Always makes my day.

Charlotte: Where is your favourite place to do gigs? Why is this?

Fiona: We love being in Philly! Philamoca is an awesome space for big gigs, but I also love the house venue, The Palace. The people that live there are super cool and really good at decorating themed parties!

Charlotte: Who writes your songs? (One/some/all of you?)

Fiona: Morgan and Brooke write most of the music and lyrics for the songs. Sometimes they collaborate on the lyrics, and sometimes they just write stuff all by themselves. We all are usually able to change things up and form songs to make them sound the best they can! I did write the Livvie Folds riff, though.

Charlotte: How long have you been song writing for?

Fiona: We’ve been writing songs all together since about when the pandemic started…for a while we just wrote over facetime, so by the time we got together we had a few things cooking. Morg and Brooke had definitely written stuff before, but I think the band was a really great place to outlet emotions and get deeper into writing stuff and seeing it come to a full production.

Charlotte: Have you always wanted to be musicians? If not, what career paths did you previously wish to follow?

Fiona: I was always looking for a creative career path available to me, and when I was younger, I had really wanted to get into film-making. If being a drummer didn’t work out, maybe I’d get more into being behind the camera for music videos and stuff. We all have various other artistic interests and hobbies that could’ve easily become a career path as well! For now, they will remain hobbies…

Charlotte: Where would you say the majority of your song writing inspiration comes from?

Fiona: Brooke and Morgan put a lot of anger and frustration into song writing, so a lot of bad experiences had become the inspiration for songs. We hope that we are able to connect to people with similar bad situations and show that they aren’t alone! Some songs like 711 Nachos and Pizza Ball are just silly songs that come from jokes. A lot of the fuel of our band comes from humour.

Once again, a big thank you to Froggy for their cooperation, and for taking the time to answer these questions!