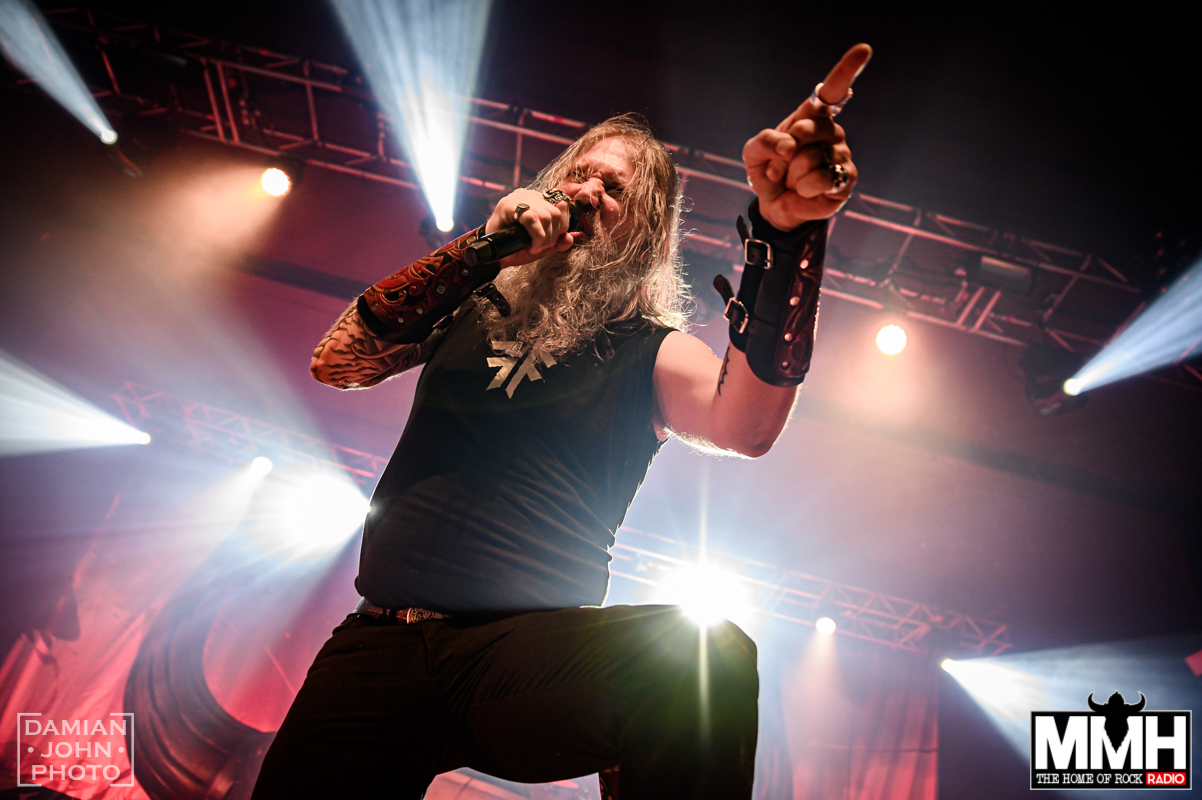 Hypocrisy aren’t your every day standard Swedish death metal band. Their music has an unrivalled ferocity with a jagged edge, just how we like it. Dirty guitar solos in the best kind of way with what feels like a black metal influence. Their stage setup is also very similar to that of black metal artists considering their abundent use of strobe lights and smoke often engulfing all of the members. It’s almost a shame to have them on first, though I’m glad to see that the fans at the O2 tonight have got down early to give Hypocrisy the attention they utmostly deserve. As they go into their final song for the evening ‘Roswell 47’, the stage turns an alien like green and the stage is once again engulfed with thick smoke promptly before the double bass kick drums hit us square in the jaw. It was an impressive show tonight and I truly look forward to seeing them once again.

Second up tonight in this powerhouse of a lineup are Arch Enemy. From the start there is an immediate increase in energy as front person Alissa whips everyone in a six foot radius with her hair and darts from side to side of the stage. The energy is upheld with guitarists Michael Amott and Jeff Loomis playing numerous dual solos showing off their finesse and playing chops… Let me tell you, it’s no secret that these guys are good.

The crowd have really warmed up as crowd surfers start tumbling over the barrier one after another throughout ‘My Apocalypse’. The band have really hit their stride now powering through songs ‘Under Black Flags We March’ and ‘The Eagle Flies Alone’ with Alissa’s growls tearing through the venue. As their set nears the final handful of songs the crowd have hit their natural rhythm all moving in sync to the pounding beat of ‘No God’s No Masters’ all with fists in the air.
Not to pit bands against each other but Arch Enemy have really stepped things up a notch here, now its up to our headliners, the epic Amon Amarth to continue that energy. Will they be able to?

After what feels like an agonising wait, the stage blackens; not to the sound of Viking hoards or battles long since past. No. To the sound of Iron Maiden’s Run to the Hills. Hey, it’s one way to get the crowd going.

The lights come up giving us a chance to check out Amon Amarth‘s impressive stage set up featuring a giant Viking helmet on which drummers Jocke Wallgren’s kit sits upon. One by one each member reveals themselves from the shadows with vocalist Johan Hegg appearing last as they kick into their first track of the evening ‘Raven’s Flight’. This is followed up by the classic fan favourite ‘Runes to my Memory’ with synchronised headbanging to boot and a few explosions thrown in for good measure.

Not a second goes by without hoards of Viking metal fans singing along pummelling the air. One fan took his love of Amon Amarth to the extreme by turning up in full chainmail standing front and centre on the barrier. I can only presume he was hoping to join the two Viking warriors battling it out during ‘The Way of Vikings’ onstage fully adorned with shields, swords and armour.

Amon Amarth are no gimmick band and they know their history inside and out with songs like ‘Prediction of Warfare’ referencing the vikings battle while conquering Ireland. They’re a band with both brains and brawn, they can take you on a wonderful journey back in time but can still knock you out with a vicious down tuned riff, the fury of their double kick patterns and deep battle cries.

It’s been many years since I last saw Amon Amarth and I’m so glad to see their ship is still sailing strong with the wind in their sails.

To Valhalla and beyond, Amon Amarth were incredible tonight.