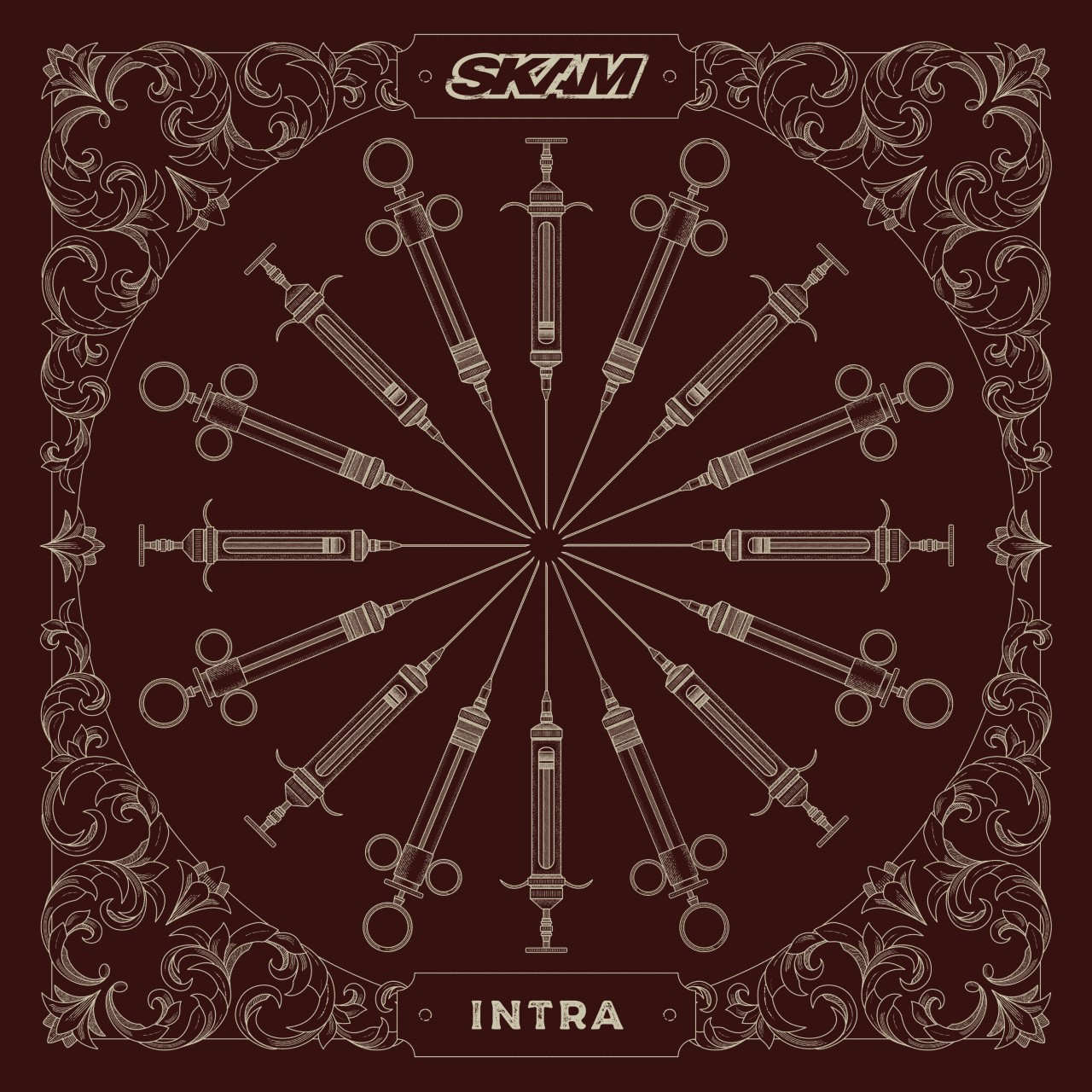 I first ran into SKAM when they supported Stone Broken at the Sugarmill in Stoke-on-Trent, alongside Those Damn Crows – which became the first gig I ever reviewed. I wasn’t aware at the time how much of a killer lineup that was. I can only hope that their mixed music can mirror their energetic, ‘get the room moving’, on-stage persona.

The Leicester-based hard rock trio is known for delivering their own gutsy take on classic British Rock, and over the last 9 years got themselves quite a following in the UK. They have independently released three albums: ‘It Comes To This’ (2011), Peacemaker (2013), and The Amazing Memoirs of Geoffrey Goddard (2017). The latter being a dive into an innovative world, a concept album built up of the memoirs of a time-traveling RAF pilot.

‘Intra’ a 6 track EP will be the first of a two-part anthology, each song focuses on a negative human trait based on modern-day struggles. It has to be said, from the get-go these guys remind me of the likes of Three Days Grace, while it misses the gruff vocals of Matt Walst – or Adam Gontier depending on what era you’re going for – the riffs and drum work just pack the same punch.

The premier track ‘Greens Eyes’ was released as the first single from the new EP and is a great example of the way SKAM builds power with dark and dirty guitar riffs sandwiched with melodic choruses to drive the nail in. The Foo Fighter stylings spill over with lyrical power, portraying the inner message of overcoming jealousy really well.

‘Wake Up’ follows the album on with subtle tambourine and a catchy guitar riff to open as vocalist Steve Hill sings ‘No illusion, no hideaway’. From what I can tell the song takes on the theme of living in a dream state as a defense instead of waking up and facing reality. The track is full of classic rock sounds and split up by a guitar solo reminiscent of Blur’s ’13’ era.

Keeping on the theme of negative human traits, ‘One Track Mind’ follows the story of a man with Insomnia ‘the noise dies down, my breaths the only sound’. It’s a track full of buzzsaw riffs built up with powerful vocals, they then go full ham and end the song with a 1 and a half minute guitar solo – if you haven’t noticed these guys love a guitar solo.

Track 4 ‘How Many Times’ has a drum-heavy opening, thundering into chugging guitar, the lyrical stylings for this one are very reminiscent of groups like Seether. The drawn-out notes in the chorus alongside melodic and hammering guitar lines build for an angsty track.

I think it’s fair to say  SKAM does follow a pattern, there’s a similar tone and method to some tracks –  if it works it works, but you run the risk of everything blurring into one. The regular pattern is apparent in ‘Fight The Fire’ which opens with a gritty guitar riff and raw vocals, split up by a tenacious guitar solo, its familiar but it’s a good listen.

The final track ‘On The Run’ compiles good rhythmic drums and dirty guitar riffs to pull the EP to a close, but I would argue that the finish isn’t the climax I was hoping for, the album opened so strong I wish they’d just brought a little more for the end – taken a step out of the metaphorical box.

The choice to base each track around a negative human trait really brings depth to the lyrics and it all combines together to make some really strong tracks. I just hope they don’t allow their solos to carry them or fall too much into a formula.

‘Intra’ is set for release on the 26th of February, and is available for preorder here.

“It’s a track full of buzzsaw riffs built up with powerful vocals, they then go full ham and end the song with a 1 and a half minute guitar solo – if you haven’t noticed these guys love a guitar solo.”