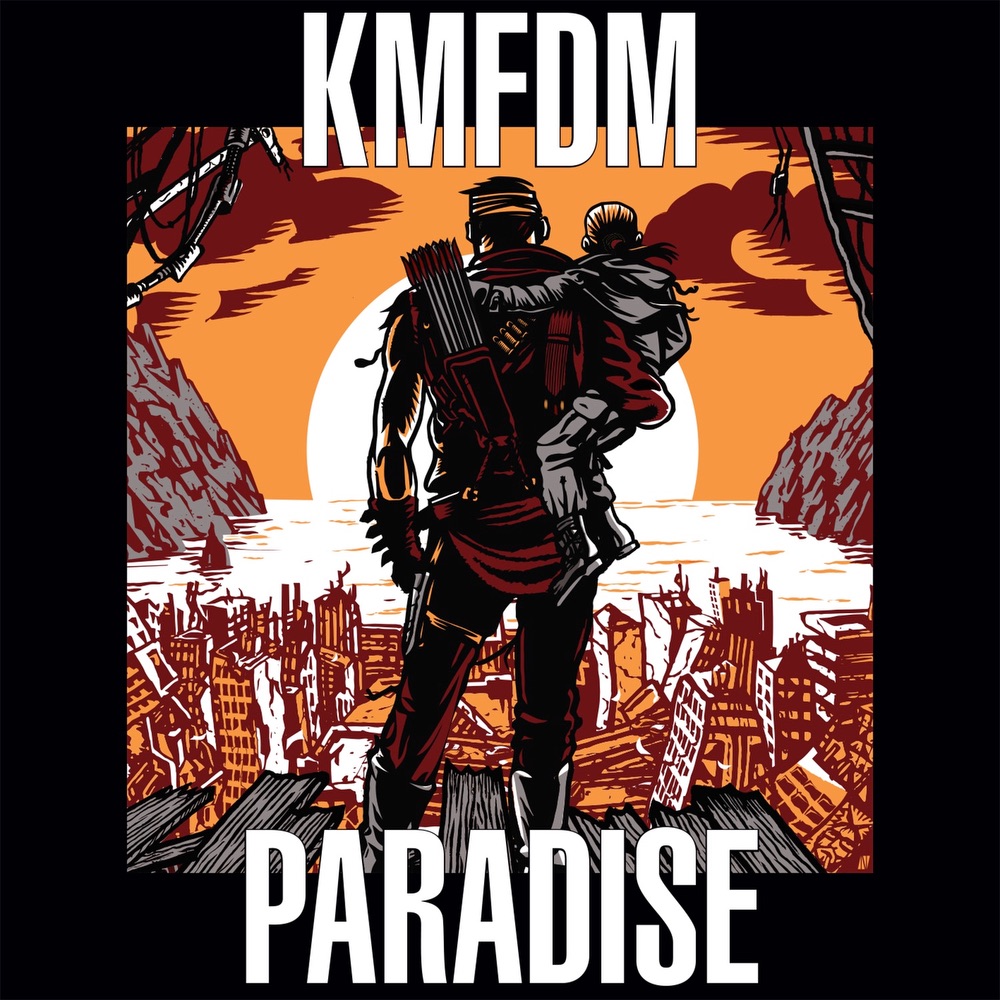 So KMFDM have released a new album, ‘Paradise’. One might be inclined to think that a band that have existed for 35 years and outputted 21 albums will have little left to offer. One may just have to reconsider their views as KMFDM are punching hard and sounding fresh.

The band are no strangers to genre bending, having always played with metal guitar riffs, electronic beats, dub, and a variety of vocal styles and plenty of collaborations. ‘Paradise’ may not particularly add anything new to the mix but it is a solid example of everything they do well. The album cover is also quintessentially KMFDM in a good way.

‘K-M-F’ kicks things off and immediately grabs attention with its confrontation and aggressive vocal setting out exactly what KMF stands for, use your imagination and you’ll soon guess. As the song progresses we are treated to rap vocals courtesy of Andrew “Ocelot” Lindslay fleshing out a mid tempo, well executed KMFDM track, but the album highlights come later. Black Sugar Transmission’s Andee Blacksugar has joined the fold and lends a fresh guitar edge to much of the album, with second track ‘No Regret’ packing quite a punch, up their with the bands previous industrial metal highlights. ‘Oh My Goth’ (nothing to do with the Razed In Black song) follows and sees a shift in dynamic. An organic bass line lays down a more sombre vibe and Lucia owns the vocals. The chorus is delicious and the track is a definite highlight, ore like this please!

The title track contains some of the harder edged guitar on the album including a rather neat guitar solo. It also sees a refreshing return to dub elements not thoroughly explored by KMFDM for some time. This combination of styles makes ‘Paradise’ one of the more memorable cuts on the album. Clocks are turned back for ‘WDYWB’ which has a distinctly 90s feel to it, 4/4 kick snare, acid bass line and male female vocal interplay. Whether it sounds retro or dated will be down to the listener but I quite liked the way it adds another dynamic to the album. Doug Wimbish of Tackhead fame joins the fun for ‘Piggy’ a percussion heavy track that features some neat programming slamming all the familiar KMFDM elements together once more.

I am kept entertained as the album progresses, at no point do the band sound tired. ‘Disturb the Peace’ has a solid funk to it, again nodding to some older school electro industrial sounds, but cutting and chopping between them to keep the dynamic interesting. The chorus even includes a truck driver’s gear change as standard. ‘Automaton’ has a swagger to it, and will go down a treat at industrial club nights for sure, a high energy track packed with synths, vocoders and perhaps even a kitchen sink.

Raymond ‘Pig’ Watts appears on his first KMFDM for some years on the next track ‘Binge Boil & Blow’ and I am reminded of how well these two acts go together. This pairing sounds as sleazy as ever, bristling with menace and wearing a wry smile. ‘Megalo’ is a thorough reworking of an older KMFDM cut ‘Megalomaniac’, almost a new track, but I would perhaps to have heard something entirely new in its place. That said, it throbs nicely with a really neat arpeggiated synth and melodic hook. One track remains, and this is ‘No God’ which once again find the band in dub mode with pleasing results.

On ‘Paradise’, Sascha ‘Käpt’n K’ Konietzko and Lucia Cifarelli, along with their 2019 passengers, have produced an album that is incensed by the continuing rise of fascism in the modern world, though it is an album that isn’t swamped by anger and negativity, actually managing to sound fun and fresh. None of the sounds here are unique to this album, but overall the genre mashing has perhaps brought more KMFDM ingredients to the table than usual. This results in a varied listen that still manages to sound cohesive. Highlights for me or the moments where dub reggae comes into play, and also ‘Oh My Goth’ which is a darker and more emotive song than we are perhaps used to. It is difficult to see how this album will reach many new ears, which is a shame as it makes for enjoyable listening and should appeal to anyone who likes their music spiced up with genre hopping. The existing fan base should be pleased with ‘Paradise’ too, as it sees the band continue on a trajectory of high standards set by their other recent albums.