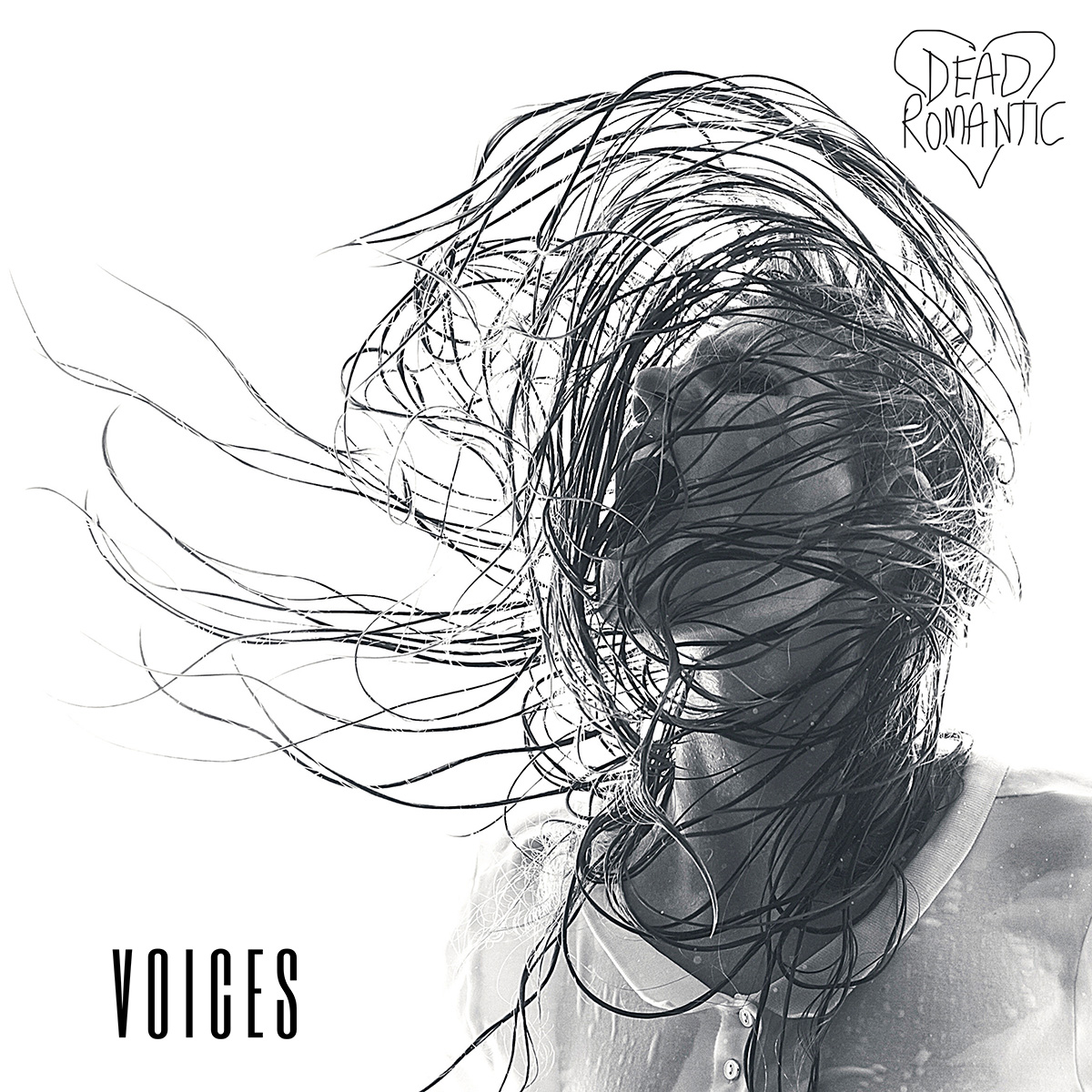 If I’ve been quiet this week, it’s because I’ve been busy with ‘the one’. My ‘one’ is this album and I think we are going to live happily ever after. Read on.

Dead Romantic are the brainchild of multi-platinum producer and guitarist Mike Krompass, the story goes that Mike came across vocalist Dan Taylor singing in a covers band online and immediately got in touch to work with him and I can 100% see why. In Mike & Dan there’s a real dream team going on here that just soars. The band are completed by the pummelling rhythm section of bassist Chris Horrocks, drummer Dave Langguth and Sam Stoddard on keys/synths.

This, their debut album ‘Voices’ is produced by their multi-platinum record producer lead guitarist Mike Krompass and features collaborations with Zakk Cervini (Yungblud, Bring Me The Horizon, Architects), Emmy winner and six-time Grammy Nominated songwriter Steve Diamond (Orianthi, Eric Clapton) & was mastered by Ted Jensen (Bring Me The Horizon, Badflower), the class and expertise behind the writing and production is apparent throughout this album, sit down and get schooled the professionals have arrived!

Opening with ‘My Parade (Fuck You)’ is genius, setting their stall out early with audacious attitude! “I don’t fight my demons ‘cause we’re on the same side now, I feed ‘em”, the first opening seconds of the album harnessing the kind of eeriness I haven’t felt since Twenty One Pilots ‘Heathens’ *shudders* and you can feel it’s about to go off, and then it does! Enter the melodic metalcore punch in the face riffs and drums, searing guitars, coupled with Dan’s guttural screams that are absolutely blood curdling at times, your pain literally feels his pain. But this is not all full-on aural assault, they have mastered the dynamics of light and shade to a T, beautiful meets brutal, it doesn’t get any better than this.

Second track on the album is their third single ‘Kissed With a Lie’ which I’m already familiar with due to almost overplaying it to myself for months, an almost spookily calming opening vocal on the first verse, showcasing just how emotive Dan’s voice is, coupled with razor sharp lyrics that swim deep “you had me painting pictures, cold as winter, bring the rain” you can feel the build-up coming, leading to a monster chorus that devours, absolutely spine-tingling!

Track three ‘Assassin’ is my favourite of the new tracks that haven’t previously been released as singles, melding electronic flourishes into dark romantic metalcore vibes really piques my interest, contender for a future single I reckon. Cutting lyrics that really strike a chord “I used to own the night, be the one to lie and hide behind the madness, ‘til you became the queen of hurt, now the tables turn, my perfect world came crashing, you’re my assassin”. I’m thrown between the melancholic shoegazing verses, the pumped foot-stomping anthemic chorus and the blistering guitar solo, it’s a beautiful ride!

Straight down to serious business on track four with ‘Yesterday’ their killer second single and the one that really cemented them as my new favourite band right about the time the hype began to build around them, and build it has, there’s a buzz around this band and for very good reason. “Your lying lips were deadly, I won’t let your demons wreck me” shout that a few times… it’s better than therapy when you can relate. Cue another fire guitar solo that continues to whip up the frenzy, you know it’s a good album when you’re exhausted by track four!

Future chart topper and the most commercial of the album ‘Stay High‘ provides a well-timed respite, it’s nice to dial down the assault and fully appreciate Dan’s voice and the realisation they could probably write a hit chorus in their sleep, nicely done, pop leanings, huge chorus and enough of a dark edge in the lyrical content to keep even the darkest of hearts enthralled! An obvious single choice at some point that should blow doors open in Italian Job proportions. Hotly tipped as the UK’s next breakthrough band, get on this now so you can say you saw them before they were huge!

‘Cry For War’ probably the heaviest on the album, it metalcore’s along nicely, incorporating all their strengths, anthemic chorus, electronic flashes, moody breaks, balls out rocking.

Next up current single and HUGE sounding ‘Fight Me’, I’m instantly seeing post-apocalyptic wasteland in my mind such is the power of the opening seconds of music. If anyone has ever done you over good and proper, screaming this will sort you out “I will paint the walls with what’s left of you” demon cleansing at its best! I’m in awe of how they go from hairs-on-end beautifully atmospheric to fucking-brutal-assault in an instant, like a musical Bugatti 0-60mph in 20 seconds!

Check out their brand-new video for ‘Fight Me’ below : –

It’s the subtle blend of different genres/sounds that keeps me interested these days, when you hear so much music so readily available on the daily it can become one big blur. I like Architects current (UK number one rock album) metalcore sound, but for me they do lack the melody and hypnotic vocals I crave, in Dead Romantic I’ve found it all,  it’s euphoric when you find music that really excites you this much and ‘Voices’ does exactly that, I don’t see why this album shouldn’t reach the dizzy heights the Architects are currently enjoying with ‘For Those That Wish to Exist’.

Track 8 ‘Alibi’ could be a pop song if they really wanted it to be, a more mellow moment, carried by the pure emotion in Dan’s voice that really gets you in the chest.

We’re on track 9 and I’ve found another previously unheard new favourite, ‘What’s Sanity’, jeez guys you don’t let up do you! Big chorus, heavy yet melodic hooks “I won’t bite my tongue or stay in my cage, if opening my mind makes me insane, what’s sanity”, it’s here I realise this is literally a full album of singles, one after the other, no fillers at all.

‘Waste of Who I Am’ bowls in with some genre blending bounce to switch up the feel again, I’d love to see a real way-out remix of this one! Quick get Tommy Lee on the blower! This band just excites my ears so much!

Track 11, the last track of the album is the infectious pop-rock thing of beauty that just makes me dance ‘All Talk’, the first song they ever released way back when in… 2020! Yep they’ve only been around a matter of months and have already amassed over 3.5 million views across their videos for singles ‘Kissed With a Lie’, ‘Yesterday’ and ‘Fight Me’ check their YouTube page in the links below to see these for yourself. This is such a tune, Dan’s vocals culminate with a couple of possessed screams later on, beautifully chilling! These guys are certainly not all talk!

To quote the band “We’re making the record we’ve always wanted to create, completely unchained, raw, filled with the best elements of everything we love about music.” – DEAD ROMANTIC.

They’ve made the record I always wanted creating too! My album of 2021 right here. Go get it!

Standout tracks : Yesterday, Kissed With a Lie, All Talk

I recently grabbed lead vocalist Dan Taylor a few weeks ago for a chat on my Early Bird breakfast show prior to this album release and just ahead of their showcase London gig, get the lowdown HERE