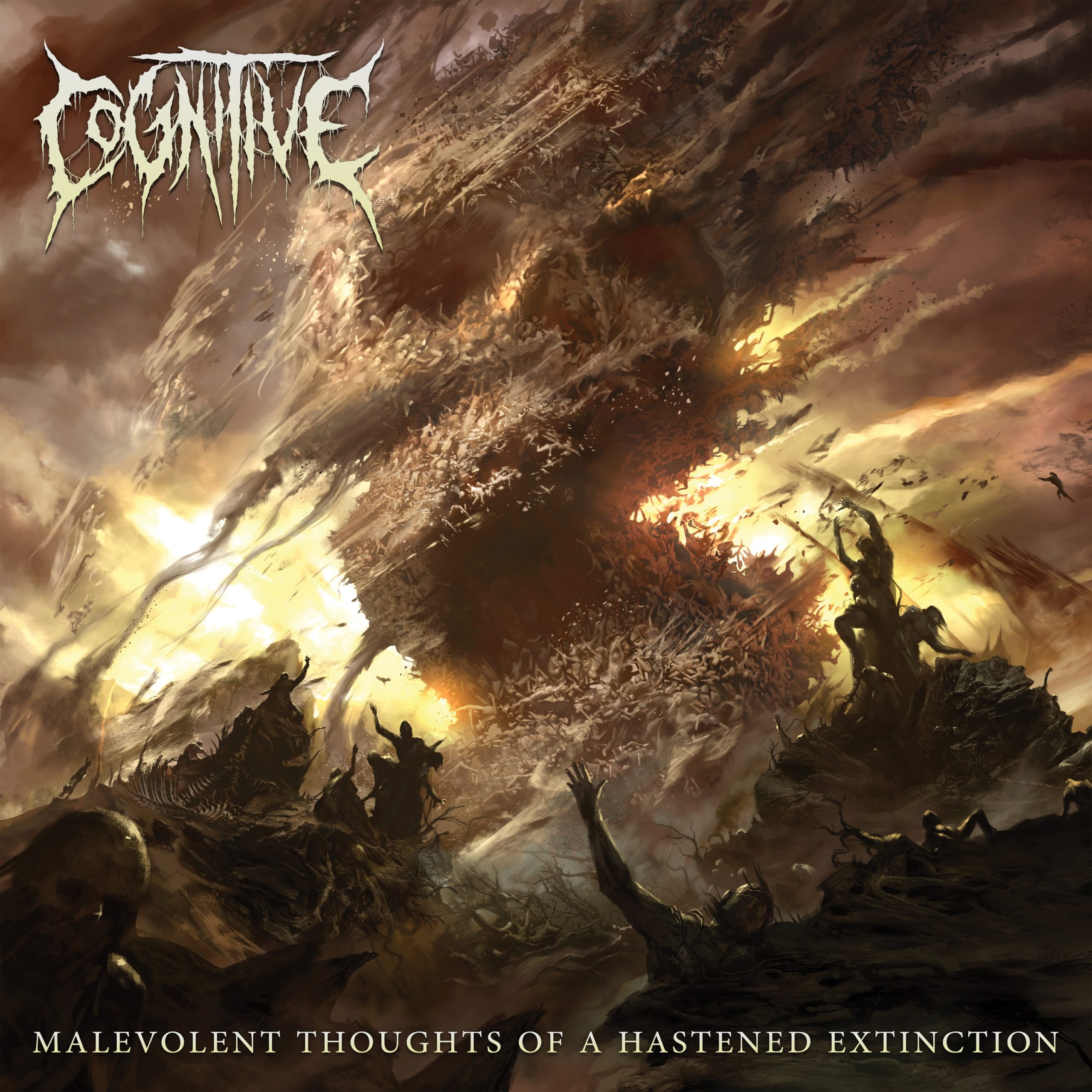 I was unfamiliar with Cognitive before hearing their upcoming full-length, titled Malevolent Thoughts of a Hastened Extinction, which is due only in a few days on Unique Leader. The New Jersey technical death metallers are now on their fourth full-length, a decade after forming. The technical death metal scene is very saturated at the moment, particularly in that part of the world, meaning that several bands are currently going under the radar. ‘Good’ no longer cuts it – you have to be doing something really special to receive any widespread attention. For an extreme band to release an album, saying it’ll be their best mix of technicality/groove/melody/brutality (etc), seems an old adage by now. Cognitive, however, hit this nail square on the head with a sledgehammer. It is safe to say that Cognitive stand above their contemporaries – and here’s why…

An old modem dial tone opens ‘Eniac’ before Cognitive set the scene quickly, with an uncompromising sense of brutality. With furious blasts, face-contorting breakdowns and irresistible grooves, the omnipresent technicality is proof that this is a techdeath album – but littered with all those elements that make death metal so great. ‘Arterial Red’ is a great example of how Cognitive don’t dilute any of the heavy, brutal backbone to the record with their dizzying sense of technicality. Yet they appreciate the simpler, more primal aspects of death metal, too. Cognitive have plenty to keep the chug fans happy on this record, especially on the likes of ‘From the Depths’ and ‘To Feed the Worms’. ‘The Maw’ has riffwork that seems to snap your head from its neck before you know it, and a sludgy, groovy breakdown midway through ‘From the Depths’ is nothing short of genius – but still with that impressive technical edge. AJ Viana’s drumming really stands out on his first outing for the band – take that opening fill in ‘Oroborous’ – and he keeps the band under control whenever they frantically pick up in pace. Cognitive certainly aren’t afraid to break the speed limit. They have all those classic, charming brutal elements to stunning effect.

Cognitive are more than just a collection of heavy riffs, though. Many of the songs have sections that are fairly different to the others in that same song in isolation, but the band seamlessly float between them with their masterful grasp on songwriting. ‘From the Depths’ cleverly starts and ends with chugging, intelligently bringing the songwriting full circle at its conclusion. The lead guitar work is really tasteful as well. Cognitive use it as a fantastic component of ‘To Feed the Worms’, to contrast with its other sections, which are just ridiculously brutal. Yet, these wouldn’t hit as hard without the sense of light and shade that Cognitive do not shy away from. Over ‘Eniac’ the solo manages to balance both melody with dissonance, and provides a real sense of emotion to the melodic ‘Destitute’, a long song that features powerful vocals within its mix that aren’t quite ‘clean singing’, but closer to that sort of thing than at any point over the record. ‘Malevolent Thoughts’ has a clever sense of musicality as well, that requires several listens for it really to sink in. You get the impression that as musicians, Cognitive really know what they’re doing. It helps them stand from the crowd tenfold.

It’s hard to find fault in Malevolent Thoughts of a Hastened Extinction. It’s almost unlucky for Cognitive the way that 2021 has been so strong for so many metal releases so far, with several bands outdoing themselves! By now, though, it’s unfair for any self-respecting death metalhead to sleep on Cognitive any longer. A rare mix of technical prowess, well-considered songwriting, and (most importantly) memorability.