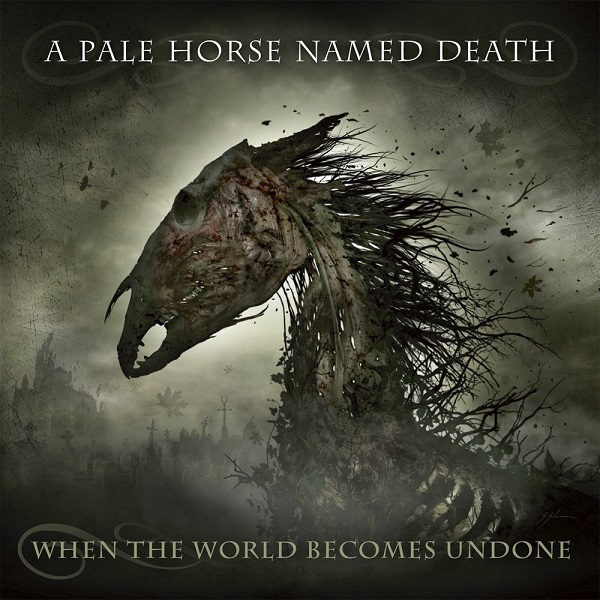 A new year is typically seen as a fresh start… a chance to cast aside the troubles of the prior 12 months for optimism and hope. Along rides A Pale Horse Named Death (APHND), who will ensure 2019 instead starts with a dreary dose of reality. The Brooklyn based doomsters have taken their time with this record, with the six years since 2013’s Lay My Soul to Waste more than ample time to accumulate enough misery to commit to disc for eternity.

The alumni effect is admittedly what first drew me to APHND, and with ex Type O Negative (TON) members Sal Abruscato (vocals, guitar) and Johnny Kelly (drums) on board, it was always going to tough for them to shake off these associations. Not that this is a bad thing, but it can set an unfair level of expectation (particularly when it’s a band as magnificent as TON). Similarities to the Drab Four are evident, such as the lingering pick slides and the way some of the chords lurch between one another, but there’s also a strong helping of Alice in Chains (AIC) too. Type O’s melodic flourishes almost welcomed you into their downward spiral, whereas AIC wore you down with their grinding slogs, which is more akin to what APHND set out to do. At times it’s an effective mix of the two, and it can make for a decent listen.​ The problem is it can be tricky to make music that is appealing when the primary function is to communicate despair. You really have to nail what you’re going for, and whilst APHND give it a good go, they miss the target a bit too often.

This record is usually at its best when it shies away from a grittier demeanour. “Fell in My Hole” burns slowly, slithering with a gentle verve in spite of a thunderous rhythmic drive, before the memorable chorus sees it really come to life. The straightforward, goth rock aesthetic of “Love the Ones You Hate” is sure to see the TON comparisons pop up, as will the trundling verse riff of “Lay with the Wicked”, which immediately made me think of “Christian Woman”. The guitar lines of “Dreams of the End” whip up the sort of melancholic, melodeath/doom infused atmosphere purveyed by the likes of Swallow the Sun, with some nice AIC styled vocal harmonies in the refrain. The title track is also a good effort, pitting desolate, piano backed passages against thick, churning doom sections, all the while effectively orchestrated by a downbeat Abruscato vocal that is laced with resignation.

The rest of the songs range from fair to average, lacking any sort of memorability or distinctive craftsmanship. The album’s success ultimately comes down to endurance, and whether the listener is willing to power through the depths that APHND plunder to. Fans will do well to work past the mid album dip, with the forgettable duo of “Vultures” and “End of Days” flanked by two throwaway instrumental pieces. This stretch is a struggle to get through, exacerbating the problem incurred by the album’s lengthy run time. It lasts an hour, but boy does it feel longer at times. Pacing and sequencing can make or break an album, and this drop off in the middle third is certainly detrimental to the overall quality here.

I’m disappointed that the six year wait has ended with a slightly underwhelming album. There are some great songs on When the World Becomes Undone, but I can’t overlook the abject mid-section that kills the momentum of the record. Cutting the offending songs and / or rejigging the tracklist would have helped, but I have to take the album as is, rather than casting any problems aside in favour of a hypothetical ideal. A flawed listen that is more frustrating than fantastic.

Highlights: “Fell in My Hole”, “We All Break Down”, “Lay with the Wicked”

Find out more on A Pale Horse Named Death here:

When the World Becomes Undone is available on January 18th via Long Branch Records, and can be purchased here.