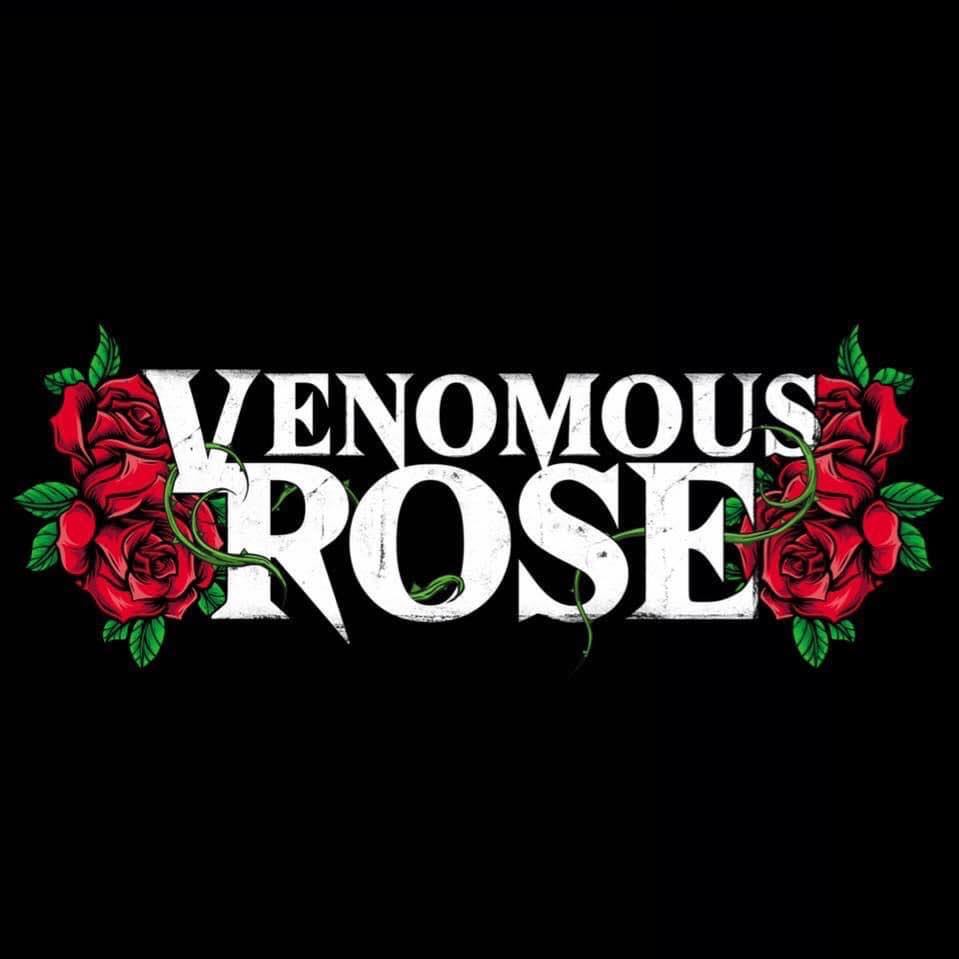 Hair metal glamsters Venomous Rose are swiftly rising up the ranks. Forming back in 2019 they’re already on festival bills and have supported the likes of ‘Crazy Lixx’, ‘Needful Things’ & Chez Kane’. Diane asked bassist Sam a few questions, to learn more about the band.

Hi Sam, thank you for taking time to talk to MMH about your band VENOMOUS ROSE

Diane – You describe yourselves as Hair Metal / Glam Rock, which band would you say VR are influenced by the most  ?

Sam  – It’s very hard to narrow it down to one band. If I absolutely had to say, it would probably be ‘Firehouse’ as they combine both the heavier and softer sounds of glam and sleaze brilliantly.

Diane –  VR are fronted by Matteo who’s from Italy, do you think this gives the band a different kind of sound ?

Sam –  Matteo definitely gives the band that unique sound vocally. I’ve never heard another band with a singer quite like him. Numerous people have asked us where he’s from when they hear us for the first time, as they try and decipher his accent !

Diane –  How long has VR been going now ?

Sam  –  We formed in 2019 only a few months before the pandemic hit. The earliest incarnation of the band was formed by Dan and Wah Wah back when they were in school and as far as I understand, they’ve stuck together until the band reached its final form.

Diane –  You have a five track EP out now ‘Raise The Flame’, which is on your Spotify page, who writes your music ?

Sam – We all write together usually. One of us may come in with a riff or melody, or perhaps even a full song and then everyone adds their own ideas into it until it all comes together. The joy of our writing style is that every song that gets put forward, always ends up sounding bigger and more exciting as we try out different ideas. We are all very much present on that record. The more you listen, the more layers you’ll discover !

Diane –   How do you get ideas for your songs ?

Sam –  Inspiration can come from anywhere ! Partying, rock ’n’ roll, heartbreak, joy, love or just having a fu*king good time ! We always want our music to connect with as many people as we can, so we try and write songs that everyone can relate to and enjoy.

Diane –   You are getting really popular and the gigs are becoming more frequent, are you happy with how things are moving ?

Sam –  Absolutely ! It’s truly unbelievable ! We went from opening for ‘The Needful Things’ at ‘The Old Salutation Inn’ in Nottingham to opening for ‘Crazy Lixx’ and ‘Chez Kane’ at ‘KK Downing’s Steel Mill’ in 10 months ! Being on that stage and playing to all those people really was a dream come true and we are so excited to get back out there again with more material and blow some more people away !

Diane –  You are supporting TAILGUNNER in July, you must be looking forward to that  ?

Sam –  Absolutely ! I have been friends with Patrick from ’Tailgunner’ since we were teenagers and jammed and played with him many times throughout the years. To open for those guys a huge privilege, especially in Birmingham – the home of heavy metal ! We were actually supposed to open for them at their debut gig in Nottingham, but sadly COVID got in the way, so it’s cool to finally be able to play a show together ! I have a massive love for them and very excited for their album release.

Diane –   How did the four of you meet, have you been in bands together before ?

Sam –  We all knew each other on the Nottingham rock scene years before Venomous Rose formed. I’ve considered those guys my good friends for a number of years and love all three of them like family. Dan and Wah Wah had been playing together for years and Matteo and I were in various bands with other guys from the scene before Venomous Rose formed. It’s a fairly small scene in Nottingham and we’re all good friends.

Diane –   Are you from a musical background ?

Sam –  Me personally, no ! I always wanted to sing, but I wasn’t able to do so properly for a long time ! I had no musical influences within my friends and family, so was fairly late to the game learning bass and guitar.

Diane  –  When did you realise you wanted to be a musician ? How old were you when you first picked up a bass guitar  ?

Sam – I first bought a bass when I was 14. It was a shitty BC Rich Warlock replica bass that played so badly, I was forced to actually buy a second bass, just to have something to play that functioned, rather than just looking cool ! I’d wanted to be a singer for a long time, just because singing along to your favourite songs is so much fun ! I picked up a bass because in my first band at school, we needed a bassist as well as a singer. The ‘band’ lasted all of three months ( if that), but I just kept at it !

Sam –  Onwards and upwards ! We’ve got a number of shows booked around the UK in the coming months, up until the end of the year, starting in July and ending in November playing at ‘Fiendfest’ in Glasgow alongside bands like ‘Vega’, ‘Midnite City’ and ‘Stop,Stop’ ! Plenty of stuff still yet to be announced and we are very excited to see all you guys on the road ! We’re also back in the studio in July recording our next single, which we’ve already started filming the music video for and we are hoping it will be out later this year ! We’re all working very hard and excited to see where the future takes us !

Diane –   Anything you would like to say to your fans reading this ?

Sam – Please come along to the show and have a great time with us ! We’re looking forward to seeing you guys and it means the world seeing how crazy you guys go when we’re playing ! We don’t ever wanna stop and it’s all because of you ! Don’t forget to pick up a shirt or CD and we’ll see you all at the bar !

Once again, a big thanks Sam, we’ll see you and Venomous Rose on the road soon !

Venomous Rose are a Glam Metal / Hair Rock band, based in Derby and Nottingham. Find out more by visiting their social pages –