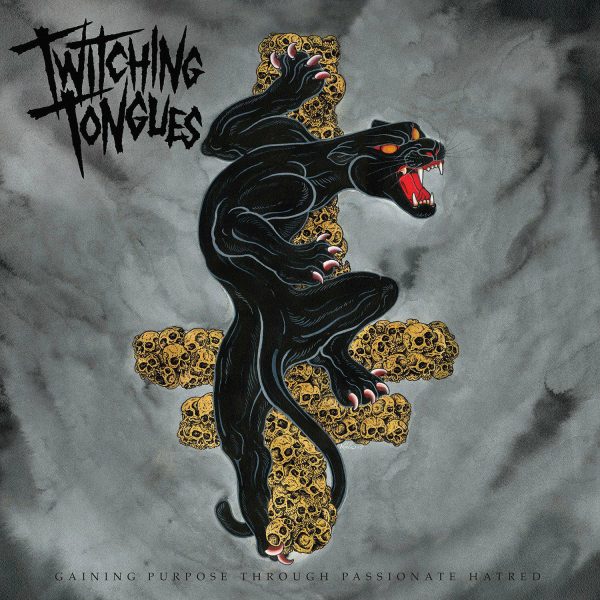 I was not very aware of Twitching Tongues when coming into this review. My knowledge only really encompassed the fact that they are going on tour with Hatebreed later this month. This set me up with a set of expectations for their sound and style. I thought I was going to be getting an album of tough, hard hitting, metallic hardcore.

The first track AWOL (State of the Union) did everything Twitching Tongues needed to do to establish the canvas for the rest of the album. From the short clean guitar intro into the gritty guitars coming in, I was pleased that I’d accurately predicted what the band were going to deliver. Then the vocals came in. I’d been expecting normal hardcore shouting. What I got was a brilliant Peter Steele impression. While there are shouted vocals scattered through the album, but they are often used to accent the sung vocals for impact. The use of clean singing allows the band to explore shades of doom metal and goth rock through the course of the album. A great example of this is track Forgive & Remember that drips with doomy riffs and gothic atmosphere, before swinging into hardcore then back to gothic territories.

A personal highlight on this album is T.F.R. This powerful, anti-Trump anthem opens with a radio announcement and a cheeky intro of the motif from Chopin’s Funeral March. This then slams into full throttle hardcore. While the rhetorical trick of calling Trump a Nazi is usually kind of lazy and inaccurate, but in the context of a hardcore song it works well. That said if you’re pro-Trump you may not particularly enjoy this song. This song contains two of the best mosh calls of the year so far. “You’re fired motherfucker!” speaks for itself, but it’s the glorious “eins, zwei, FUCK THIS!” that hits just before the band play a monstrous riff ripped wholesale from the Machine Head playbook that steals the show for me. It’s brilliant and irresistible. I’ve definitely had some odd looks in the street when I’ve been compelled to yell these at full volume.

The brilliance of this album is not just in the excellent song writing. It’s in the sequencing of songs. Going from the slow Kill For You into the break neck T.F.R into the gothic menace of Forgive & Remember gives each of the moods from these songs more weight by contrast. This is best shown by how the piano lead ballad Long Gone, which is already a heart string tugging masterpiece, is made to feel even sadder and more emotional by immediately following it with The Sound of Pain. The Sound of Pain is the heaviest, fastest and most aggressive track on the album, and this is enhanced by the contrast of having just heard Long Gone. Only bands who are thinking about their album as a whole experience from beginning to end can do this, and doing it so well shows mastery and full understanding of the music they’ve written.

2018 has produced plenty of good albums so far, especially in the world of hardcore. Gaining Purpose… is another brilliant example of this. If it’s March and I’m already worrying about what I’m going to have to cut out of my top 20 albums of the year then the world of heavy music is doing something right. Twitching Tongues destroyed my expectations in a good way. There is very little on this album to criticise, but a lot to praise. Buy this album.

Highlights: Long Gone, T.F.R, Sound Of Pain, Kill For You

Gaining Purpose Through Passionate Hatred is out 9th March 2018, via Metalblade. You can buy the album here.