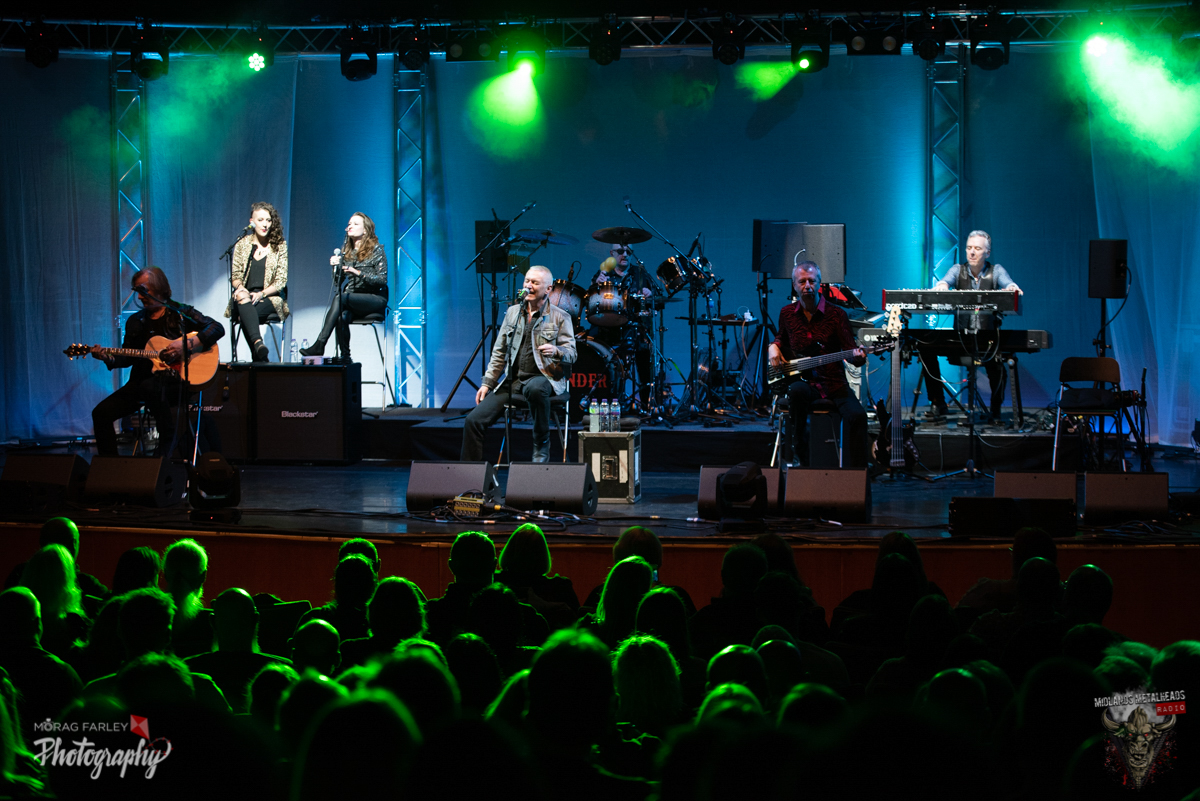 On the back of their new album ‘Please Remain Seated’, Thunder are touring the UK and Midlands Metalheads Radio were fortunate enough to catch them on the opening night in Cardiff. The beauty of this is that the venue is an all-seater, so it was very informal indeed.

To start things off, the extremely talented and very humble Dan Reed took to the stage. One man and his acoustic guitar taking us through a short set of solo and Dan Reed Network numbers.

His voice and energy are so addictive, adding new fans as he began with ‘Only Love’, followed by the Dan Reed Network song ‘Champion’. Other Network songs he gave us were ‘Get To You’ and ‘Rainbow Child’ which still gives me goosebumps, whether it’s full band or solo. ‘Coming Up For Air’ shows a man fully comfortable and happy with his music, but then we had his personal story about the Aberfan disaster of 1966, when 116 children died. Being in Wales, this struck a chord with everyone watching and you could have heard the proverbial pin drop during his tribute.

Dan Reed is one of the most incredible songwriters out there and the ovation said it all.

And so to Thunder. No big snazzy beginning for them as Luke Morley and Danny Bowes simply sauntered out in front of an expectant audience, Morley with acoustic in hand. The stage was set up with a drum kit, keyboards and six chairs, two of which would be occupied later by backing singers Lara Smiles and Emily Lynn. The set began with a stripped down ‘Love Walked In’ and ‘Stand Up’, showcasing the depth and soul of Danny’s voice.

If you’ve heard what they’ve done with their back catalogue on the album ‘Please Remain Seated’, you’ll know that they have reworked their material considerably, rather than just re-recording the songs.

The rest of the band, including guest keyboard player Sam Tanner, then joined them and proceeded to give us an hour and three quarters of quite amazing renditions of tracks like ‘Future Train’ which is now full of soul and gospel, the Led Zeppelin tinged ‘Blown Away’, ‘Empty City’ which has been turned into a bluesy classic, as has ‘Fly On The Wall’, unrecognisable from the funky album track. One of the rockers from their debut album, ‘Girl’s Going Out Of Her Head’, is now a jazzy smoocher, while ‘Loser’ becomes a ballad and ‘Bigger Than Both Of Us’ gives us country of all things.

The thing you most notice is the musicianship of the band and the aforementioned vocals of Bowes and this is rammed home during the well deserved encore, which includes a funky ‘She’s So Fine’ with superb organ work. The final song of the night will stop you in your tracks if you’re going to see them on this tour – ‘Low Life In High Places’ is an acoustic led rocker on the ‘Laughing On Judgement Day’ album, but here it is stripped down to the bare bones and just when you expect it to rock out as it does on the album, the Thunder Choir appears behind the band to leave everyone speechless. It is a stroke of genius and totally blew me and the rest of the sold out audience away.

The standing ovation and applause was incredible for a band who stepped out from their comfort zone and did what THEY wanted to do. Even Danny Bowes commented on how strange it was to do a whole gig sat down!