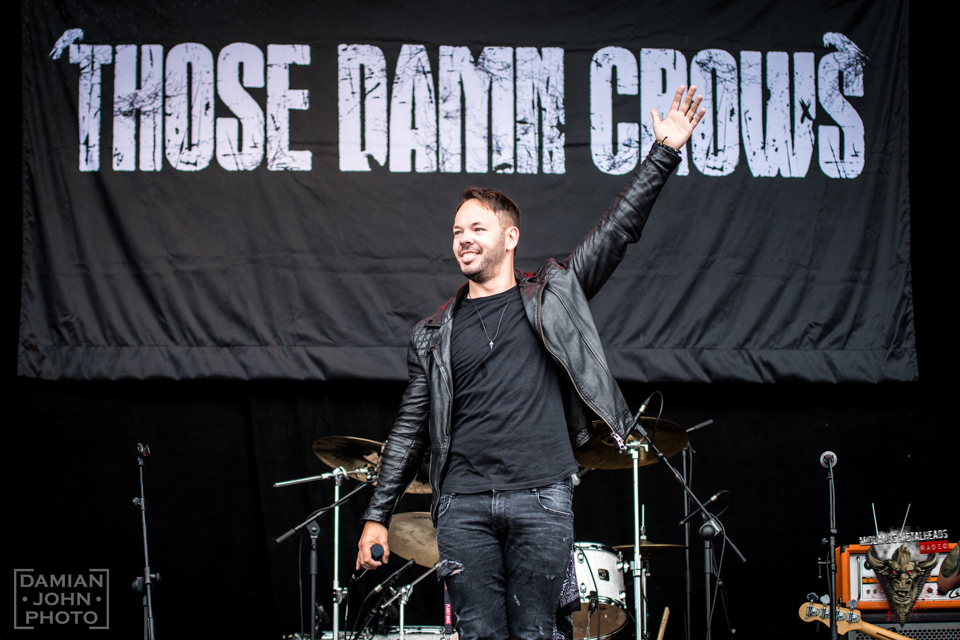 The last time I saw Those Damn Crows perform live to a sizeable and enthusiastic crowd was in Wales atop a mountain, at the very rainy and unforgettable Steelhouse Festival. Interestingly, this is the place where I was first introduced to the bands soulful yet powerful music, which took me by storm (quite literally at some points). From hanging out backstage with several bands and seeing if bands really do live up to the stereotypical ‘rock n roll reputations’, Those Damn Crows are the most genuine and loveliest group of people, who I have ever had the pleasure of meeting. And it was no different this time around seeing them perform in my local area at Birmingham o2 Institute, opening up for ‘The Bad Flowers’ and ‘Federal Charm’ on their Planet Rock Presents tour.

Over the past week, Those Damn Crows have had to cancel a couple of their shows due to the bands frontman, Shane Greenhall, falling ill. After some much-needed rest, they returned for their Birmingham show, ready to rock the crowds socks of. Due to this news, I was half expecting the lead singers vocals to lack a bit of support and to occasionally slip up. But I was SO wrong. The minute I opened the doors and entered the venue I was blown away by how powerful Shane Greenhall’s vocals are and was captivated by their performance right until their electric finale. Luckily, due to seeing the band perform live prior to this show, I was able to see if there was any difference (vocal wise) and even though the singer did not feel 100%, he definitely gave it his all and mesmerised everyone in the room.

Their set included songs from previous albums to new, starting with the extensively air-played ‘Blink of an Eye’, which the crowd recognises from the moment the first note is played. Greenhall shouts “Sing along if you know the words”  (which not many support bands can say that). From hearing ‘Blink of an Eye’ performed live and their stripped back version, it’s safe to say this is one hell of a catchy song. This is followed by ‘Behind These Walls’ before the roaring ‘Rock ‘n’ Roll Ain’t Dead’. “Birmingham, do you love rock ‘n’ roll?! We fucking love rock ‘n’ roll and we’ve got a song about it”. The rebellious fun-filled anthem is chanted back to the band yelling “Who says rock ‘n’ roll is dead”, reminding us all what rock music is all about.

These local Bridgend lads were able to have a laugh with the audience and even encouraged them to chant Happy Birthday to the band’s guitarist, Ian “Shiner Thomas, who was not amused by it yet appreciated the crowd’s enthusiasm. The crowd also played a part in giving support to the band as they sang from the top of their lungs and danced the night away, ultimately, making a small room feel full.

By the time it came to the bands last three numbers, it felt like a blur… an unforgettable blur, (I know that doesn’t make any sense). As much as I thoroughly enjoyed their set, I was upset to see it end so quickly. I personally believe the band has the potential to sell out headline shows, which I would happily recommend to anyone who has a passion for all things rock. If there is anything Those Damn Crows have taught me in the short amount of time of knowing them, it would be to never underestimate the support act, as you could miss out on something amazing.

Check out our interview with Those Damn Crows HERE

Murder And The Motive is out on 5th October 2018 and can be pre-ordered now at www.earache.com/crows

Those Damn Crows are:

Don’t Give A Damn

Fear Of The Broken

Blink Of An Eye