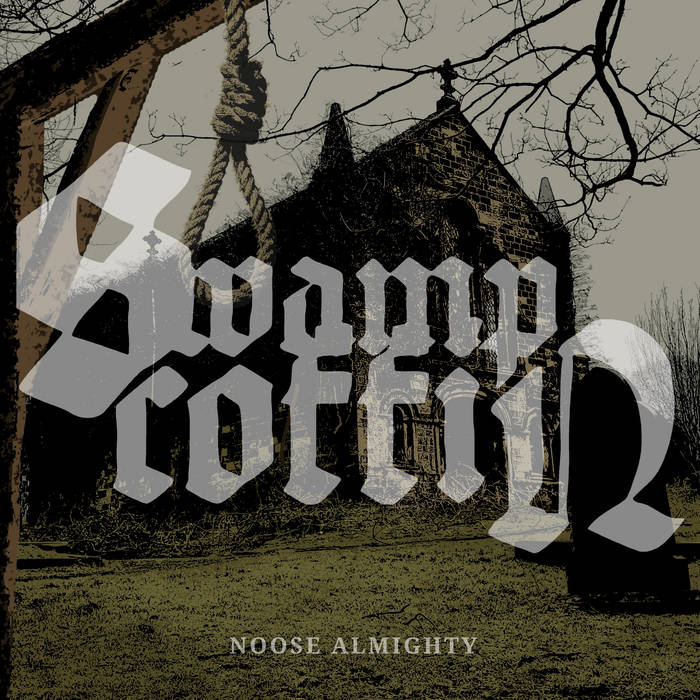 Rotherham trio Swamp Coffin return with the grim, miserable Noose Almighty tomorrow. Despite tongue-in-cheek song titling such as ‘Jägerbombsaway’, ‘Barbarian Windsor’ and the title track, it’s an album of catharsis that deals with depression, trauma, grief and disillusionment. Musically, Noose Almighty is a NOLA sludge album through and through, but with that irresistible Sabbathy groove alongside a death metal ugliness that makes for an unsettling, uncompromising listen. Formed five years ago, Swamp Coffin have cut their teeth on the live scene, sharing stages with the likes of Raging Speedhorn, Mastiff, Conan and OHHMS, earning themselves a spot on the APF Records roster. Evolving nicely from 2019’s Flatcap Bastard Features, Swamp Coffin sound bigger, more vicious and more emotive this time round. It’s not for the faint of heart…

Opening track ‘Your Problem’ begins proceedings with a titanic, doomy guitar riff that crushes in its simplicity. They waste no time in creating an atmosphere to set the tone for the rest of the album; even the more ‘upbeat’ grooves still drip with dark ominousness. It’s a clever move to place this song first. Without a single riff that isn’t unmemorable, it lulls any self-respecting sludge connoisseur into Noose Almighty with a vice grip. Double bass kick patterns from David Wistow and a more hardcore-style attitude gives a more aggressive approach to ‘Jägerbombsaway’, but the sense of impending doom is still present. As the song evolves, we enjoy a nice, bluesy guitar solo from Jon Rhodes, before a truly callous, vengeful outro drags the track to a close. ‘Barbarian Windsor’ follows, characterised by overt nods to Eyehategod. It has a buildup midway through that makes way for a titanic, pulverising guitar riff that will bring many listeners back for more – before Swamp Coffin bring in a section of real emotion and melody, with subtle guitar bends that truly create a feeling of desolation. To see the relentless heaviness on display as one dimensional would just be missing the point.

The bleak title track allows the album to breathe. Jon’s vocals are as tortured as ever, but with clean guitars leading the song for the first 100 seconds or so – giving a hint of Conjurer’s ‘Hollow’ in the process – Swamp Coffin explore uncharted waters in their own musical journey, and do so to great effect. The guitars have a distinctly melodic aspect to them, with stylistic parallels to blackened doom metal – but vitally, still sounds like Swamp Coffin. The song title and lyrics came to Jon while on holiday at Disney World; not a setting you’d expect for a track so permeated by suffering and emotion, although it acts strikingly as the album’s epic centrepiece. Jon has openly expressed pride in the song, and it’s easy to see why. ‘Knuckledragger’ has a bit of an old-school death metal vibe, with bassist Martyn White rhythmically locking in well with David behind the kit. It’s an angry beast of a song, an aural assault for eight minutes that sees Swamp Coffin taking no prisoners at their most uncompromising. ‘Welcome to Rot’ then rounds off the album in glorious albeit hostile fashion; a riff and groove that threatens to snap your head from its neck wastes no time in getting the song going. During this ugly denouement, Martyn’s filthy, fuzzy bass tone is given the opportunity to stand out, as is Jon’s ear for haunting guitar melodies. You’re left needing to catch your breath as Noose Almighty finally screeches to a halt.

It’s ugly. It’s brutal. It’s a hell of a listen. Noose Almighty really sees Swamp Coffin grow into their own sound and style and deserves commendation for this; as much as it’s a sludge album with clear influences in that field, the stark emotion is clear throughout, particularly over the poignant title track. Although Swamp Coffin flirt with different styles, particularly as the album goes on, the despondent, resolute atmosphere binds everything together effectively. It’s testament to the power of songwriting that Swamp Coffin have been able to create something so powerful in the face of what is obviously very harsh adversity.