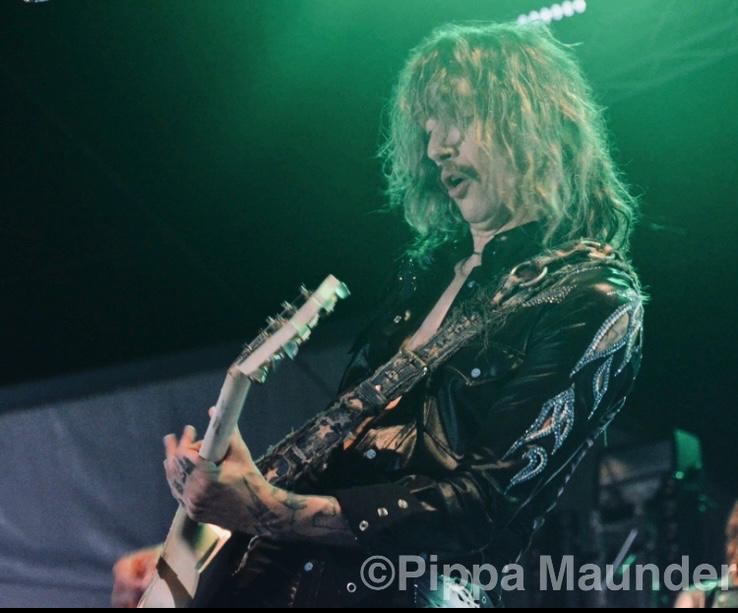 Having slept like the proverbial log, it was back up the mountain pretty early, as I needed to see all the bands. Oh, I forgot to take another Covid test, which was necessary as I had been off site. Fortunately, the well organised people of Steelhouse provided a testing place on the way in. As I waited for the, fingers crossed, negative result, I bumped into Doddy White from Rockers Through The Ages so we had a bit of a chin wag, which passed the time. The lovely medic man was also nice to talk to and then I noticed people were forming a really long queue to get into the ground. Of course chatting away I learnt that the wind and rain overnight had caused problems with the stage, basically some of it blew away and water got into the electrics ! Which meant there would be a delay, while things were fixed and ensure most of the queue was inside before the show started. Thankfully everything was soon sorted out, the security got us through the gates really quickly and there was just enough time to grab a coffee and raspberry muffin, before kick off.

REVIVAL BLACK  – On stage a bit later than planned the Liverpool (and Southport ) rockers, Revival Black didn’t let the delay affect their performance. Previously known as Black Cat Bones, the change in management and new line up has worked wonders. I saw them in Cannock before the plague and they were incredible. Today they stun the early punters with their gutsy and blues infused groove. We heard a lot from the ’Step In Line’ album which has also been followed up with a live recording ‘Live In Your Lounge’. Did have a laugh when bass player Jamie Hayward landed off stage, got lost and missed the band photo with the audience, he will never forget that. With plenty of gigs and more festivals coming up this year, things are looking good. I managed to chat with Adam Kerbache, Alan Rimmer & Jamie Hayward after their performance –

HANDS OFF GRETEL  –  Since this bands creation just a few years ago, they have been nonstop. Permanently on the road and delivering their own brand of self made videos and independently produced music. That’s the way front woman Lauren Tate operates and the individuality succeeds in getting them noticed. Playing alternative grunge punk, they added another edge to todays line up. It was pleasing to see such a colourful and vibrant band, however it’s not all sugar coated, the songs from the ‘I Want The World’ album with the well played ‘It’s My Fault’ single, are about the horrors and the reality of the struggles, many of us face in today’s pressurised world. Catch the band on the road, here is the latest tour poster  –

FLORENCE BLACK  – This trio are fast becoming one of the bands of the moment, they have so much happening, it’s hard to keep up. There’s a massive amount of support today, well they’re only from up the road in Merthyr Tydfil. With 3 EP’s and a few singles to their name, the band are childhood friends, Tristan Thomas on lead guitar and vocals, Perry Davies providing sticks and Jordan Evans on bass. It’s a Saturday afternoon and we are ready to be blasted, as this band are full of energetic and pulsating rhythm. The throbbing ‘Bird On A Chain’ and recent single ‘Can You Feel It’, which is full of gravely tones and low striking riffs, are contrasted with the more subdued numbers. Check out the new single ‘Sun And Moon’ which is more temperate and gentle. A Florence Black show isn’t complete without their version of Budgie’s ‘Breadfan’ and we see Michael Paget ( Bullet For A Valentine ) join them, which is brilliant. Michael has helped the band over the last year with demos, using his home studio nearby. September 17th sees the release of their debut album ‘Weight Of The World’, I think the presale queue is already longer than the Welsh Coastline.

Pre-order Weight Of The World on CD & Vinyl at    https://florenceblack.tmstor.es/

KRIS BARRAS BAND – The magnificent guitar player and his band opened with ‘Ignite’ from the 2019 album ‘Light It Up’ and for about the next 40 minutes Steelhouse bathed in bluesy rock and roll. A few old numbers like ‘Rock and Roll Running Through My Veins’ and ‘Kick Me Down’ were mashed up with newer ones, ‘Dead Horses’, Long Gone’ & ‘My Parade’ which were instant pleasers. The crowd singing a new song back at him,  made Kris comment ’Steelhouse I f**kin love you’. Picking up a guitar from the age of 5 and recently finding international renown, with the ‘Supersonic Blues Machine’, Mr Barras is a pleasure to watch. Right up to the final song ‘Hail Mary’ which featured on ‘The Divine & Dirty’ album in 2018, the atmosphere was one of laid back and soothing vibes.

TOBY JEPSON – Due to the Black Spiders having to pull out following a positive Covid test, the running order was changed slightly. Wayward Sons moved to the Spiders’ Sunday slot and Toby did a solo acoustic set today. After the shock of seeing the short hair, yes all the locks have gone, ( never to return he told me  ) the former Little Angles frontman, gave us a dozen or more tracks from his former band. Back to 1989 and ‘Don’t Prey For Me’ and 1991 with ‘Young Gods’. We were fully entertained with this change of plan and what a fitting idea, being the latter album’s 30th anniversary. ‘Do You Want A Riot’, ‘Boneyard’, ‘Radical Your Lover’ and ‘Kickin’ Up Dust’ among others, all reminded me of those early days and how ‘The Little Angels’ exploded onto the scene. Always loved watching them live and today Toby did the songs justice.

THOSE DAMN CROWS  –  The local heroes came on to rapturous applause. The albums ‘Point Of No Return’ and ‘Murder & The Motive’ have seen the Bridgend five rise to become one of the hottest young rock bands around. Vocalist Shane Greenhall takes control from the off and soon has the packed crowd in his hands. Over the last couple of years I have seen this band mature so much and grow in confidence, now they are so dynamic on stage it’s unbelievable. Shane rushes around leaping onto a photographer at one point, he is so pumped. Backed by the ever resilient Ronnie Huxford on drums and Lloyd Wood holding it together on bass, the set is full on and well perfected. Shane takes to the piano for ’Never Win’ and I love how this band have developed their performance, engrossing and totally captivating. The dual guitarists David Winchurch and Ian ’Shiner’ Thomas play with so much coolness, even on this sultry summer evening. You nailed it guys, I’ve never seen a crowd so together, joining in and singing every single word.  Go to their social pages for more info, they are so active with festivals and gigs at the moment.

THERAPY?  – Hard to believe that this Northern Irish band have been in constant use since 1989. Original members Andy Cairns on vocals / lead guitar and bassist Micheal McKeegan are joined by Neil Cooper, who has been on the drum stool since 2002. With around 15 studio albums in the bag and releasing a greatest hits one last year, they are still as solid and tight as ever. We hear a wide selection from the popular 1989 release ’Troublegum’  right up to tracks sun as ‘Krakistocracy’ and ’Success? Success Is Survival’ from ‘Cleave’ which came out in 2018. Indie/alternative or rock, however you label them, they go down really well tonight, in front of an appreciative audience and lots of T-Shirt love for them among the pack. Finishing on the favourite ‘Nowhere’ from ’Troublegum’, I think the variety we are getting from the amended line up, is working incredibly well.

THE DARKNESS  – I suppose you can call The Darkness a marmite band, but love, adore or not like, there is no question that Justin Hawkins is one hell of an entertaining frontman. Storming onto the stage with all the bravado and aura of a celestial body, he is dressed in a black and silver number, quite reserved for him. I did read he sold a lot of his famous one pieces, for charity, so fair play. The debut album tracks still play a main part of the set, starting with ‘Black Shuck’ with references to their local area in Suffolk. It was back in 2003 that  ‘Permission To Land’ was granted and nothing has been quite the same since, despite a five year hiatus. We get ‘Easter Is Cancelled’ and then back to older songs ‘Growing on Me’, ‘Love Is Only A Feeling’ and ‘Givin Up’ are between some from 2015 ‘Open Fire’’,Barbarian’ and ‘Roaring Waters’ being the main contenders. By this time Justin is in nothing but some fetching high waisted blue denim shorts, but grabs various clothing and hats from the fans down the front, to do some quick changes. After three more from the debut, ’Stuck In A Rut’, Get Your Hands Off My Woman’ and the hit ‘I Believe In A Thing Called Love’ they leave the stage, returning for an encore with ‘Love On The Rocks With No Ice’. Brilliant showmanship and always a great band to watch. A perfect ending to Saturday.

Another fine day, a few problems due to the overnight weather, were soon solved and the rain was light, with just a few showers, only spitting as they say and I did have the MMH brolly to keep me dry! Day 2 over already, the weekend goes so quickly. Back tomorrow and up early again, as first band should be on around 12.15pm.