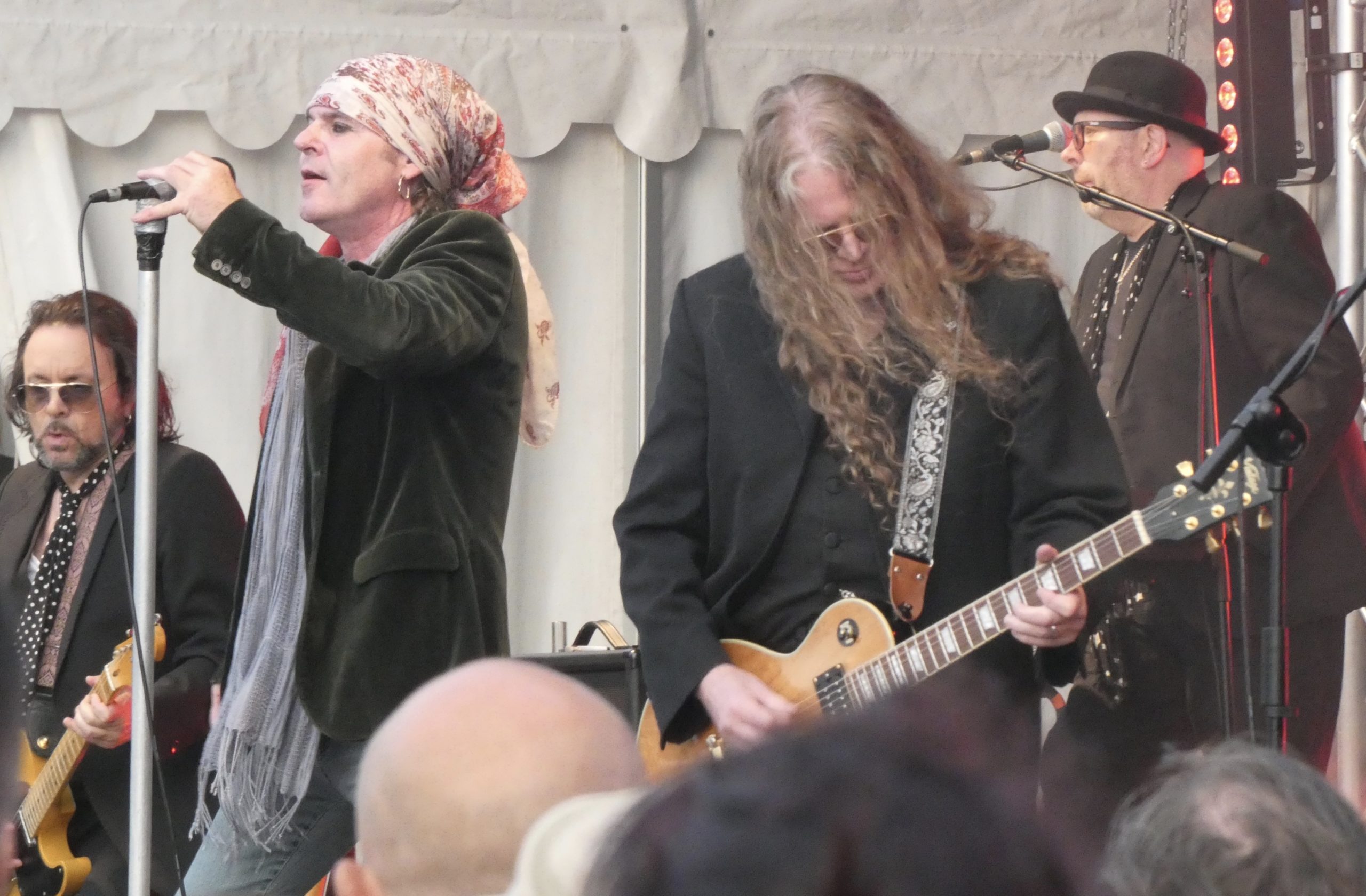 We do have to thank Mr Jukes who lets us use his farmland at Hafod-y-Dafal for this annual  festival. STEELHOUSE is situated up his mountain near Ebbw Vale in South Wales and each year we drive up the beaten track for 3 days of the most pleasant of festivals you could wish for. Well organised and just the right capacity, not over commercialised and always having a superb line up, it has to be one of the best UK events of its size. We are celebrating 10 years of Steelhouse and of course this time it was a bit different, we took Covid Tests before being allowed in and the line up changed with overseas bands not being able to attend, then we saw THE BLACK SPIDERS fall prey a day before, with a positive test result. So on the first day after checking in and getting wristbands, programmes and looking at the traders stalls, I made my way down the front for the first band of the weekend.

THE HOWLING TIDES  –  Faced with being the opening act on the opening day, these youngsters from the Midlands held their nerves really well. Only being in existence since 2018, The Howling Tides have already earned ample respect from the likes of Damon Johnson (Black Star Riders/Thin Lizzy) and Oli Brown (RavenEye). Much of todays set was from the self titled EP and judging by the crowds reaction to ‘He told Me’ I can safely say they have already added to the 4k Facebook followers. Loads of moody and soul searching rock from these guys and they are just so appealing. See them at the Rock & Blues Custom Show this weekend and at Bloodstock in August. They have also landed support on tour with ‘Ricky Warwick’s Fighting Hearts’ next March. Ears have it that there’s also a debut album is on its way, I for one can’t wait.

MATT MITCHELL & THE COLDHEARTS  –  I’m a big fan of this band as Matt has one of the most captivating voices around today. Having fronted the AOR band Pride, turned more aggressive with Furyon and then led Colour Of Noise, a more Blues orientated band, is proof of his amazing ability. Today with his solo outfit the Coldhearts he took to the stage and held us in his grasp throughout the whole performance. ‘Black Diamonds’ was probably the stand out track, from the eponymous album of 2019. Look out for the band on the road, I know they are at HRH NWOCR Leicester in January. I also understand there is a followup album on it’s way.

KING CREATURE  –  I have been waiting to see these guys from Truro for ages. After watching them during an online stream, I was completely smitten and today they didn’t disappoint. Coming on at 5.55pm was just about acceptable to let them loose on the Steelhouse crowd, many of who had heard King Creature before, judging by the cheers when they started up. Heavy and fierce, a set comprising mainly from the last album ’Set The World On Fire’ it was impossible not to be shaken to the bone with the amount of energy coming off that stage. Vocalist Dave Kellaway looked menacing, delivering his lyrics with so much force, yet being able to change it around during the more atmospheric moments. With more festivals like Bloodstock, lined up and a tour in December with Orange Goblin, do check them out.

RAVEN EYE –  Oli Brown fronting Raven Eye is always a favourite, never putting a foot wrong, he is a master of his trade. Hard to believe they have been going since 2015, when the Milton Keynes blues guitarist decided to form a heavy rock influenced band. With plenty of time during the performance to give us a cross section of work, they went down well. Since the debut EP ‘Breakin Out’ Oli and company have gained such a multitude of fans and there were stacks of them today down the front. I think today was probably even better than their last Steelhouse showing, back in 2016. Michael Blackwell was brought in to play bass with Adam Breeze completing the line up.

THE QUIREBOYS –  The wind was quite strong when Spike and crew started up, so the sound was not the best, but that didn’t stop us singing along to many of the hits and regular renditions from the Quireboys. All the favourites and it was fitting to play a few from ‘A Bit Of What You Fancy’ as the boys are celebrating 30 years of that album and will be releasing a selection of special editions. But tonight they just flowed with the bar room glamour we love and with all the smiles and cheers from the crowd it seemed like the Covid cloud was at last lifting. We were back to some normality standing watching Spike, Paul Guerin, Keith Weir and Guy Griffin doing what comes naturally. There was a touching moment as well, when Spike handed his Carnation to a lovely little girl down the front.

PHIL CAMPBELL & THE BASTARD SONS  – The headliners blasted on to the stage around 10pm with echoes of Deep Purple, before the ever popular ‘We’re The Bastards’, got them underway. We knew what was in store, a mix of Phil Campbell & The Bastard Sons originals with a pile of Motorhead classics thrown in and no room for anything else in between. What we didn’t anticipate a couple of weeks ago was that vocalist Neil Starr would have left the band and be replaced by Buffalo Summer frontman Andrew Hunt, if only as a temporary measure. A lot of us were intrigued to hear how this change of personnel would sound. After ‘Going To Brazil’ and ‘Born To Raise Hell’ there was no doubt at all, that this had been a successful and cunning plan. Mr Hunt nailed it, I guess it was pretty nerve racking for him but you couldn’t tell. By the time we reached the last two songs ‘Silver Machine’ and ‘Ace Of Spades’ Steelhouse was in full party mode and his initiation was complete.

A great first day, the weather was perfect and everyone appeared to be enjoying themselves, drinking, laughing, meeting old friends, outside at a festival with live music, for the first time in an age. Roll on tomorrow, I head back to my hotel, tired but with a smile on my face, I’ve missed this so much.

Day 2 & 3 to follow shortly, with interviews and more photos.