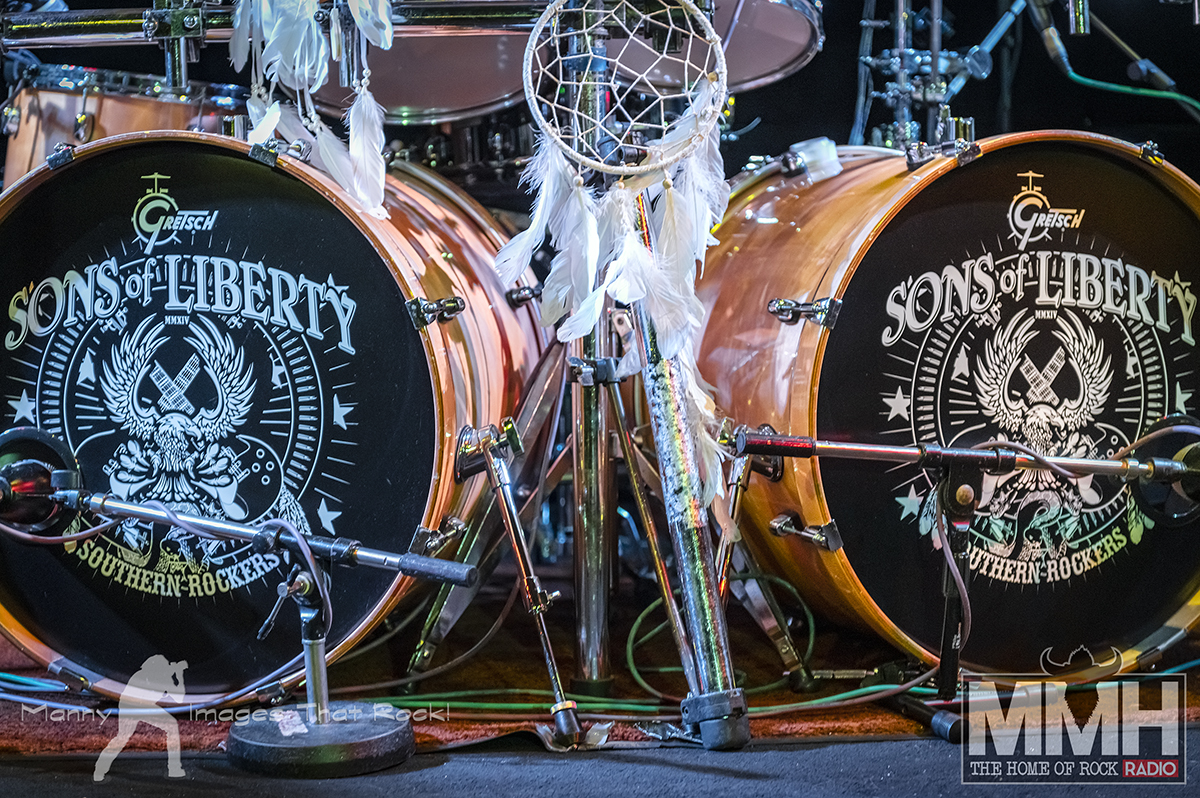 A venture into the depths of Leicester, to one of its more popular music venues, is the order of the night. The Musician Pub on Grafton Street is hosting a British based American Southern Blues-Rock band, so this is a proper night out, out session and with live music in the offing, excitement is certainly running high. So high in fact I get there way too early.

On arrival, the band or some of them are outside the pub and are only too happy to chat about the last 18 months and life in general. Real humans with no side, a good start in my book.

Once inside, the venue, it’s laid out more like a blues club, no standing here as tables and chairs adorn the place, they must know the bands demographic as I’m sure the chairs will be appreciated.

With sound checks over, we have a prompt start with Trident Waters, a Blues power trio from London that certainly knows their way around a good hook or two. With a sound that’s said to take inspiration from the Blues greats such as King and Hooker and the more recent Rival Sons and Bonamassa, It’s obvious from the start that we have competent firepower blasting the covid restrictions into a thing of the past.

The 10 track setlist is great as it allows the band, Andrew Knightley on big hair, guitar, and vox, Wilson Zaiden on Bass, and the man with the best view in the house, Greg Zaka on the Drums, to get into their groove and deliver a polished edgy blues-rock performance with little or no signs of ring rust.

Pointing out that their new album is due out in October, which was mixed by Kevin Shirley of Iron Maiden fame, shows the attention that these guys are attracting.

(An aside but worthy of a mention is that our very own Tony Heare, DJ and interview extraordinaire gets a notable mention from Andrew Knightley who remembers the interview they did with this legend, let’s just say that a mutual acknowledgement was passed on about how great Tony is, and the bands best wishes for whatever happens in the future).

When I agreed to come along and review tonight the thought of yet another British band trying to be an American Southern Blues-Rock band filled me with both intrigue and terror, probably more dread than terror, as many have tried but few have succeeded in mastering its ‘feel’, gulp!

I cut my teeth on this genre whilst at boarding school in the ’70s. BTO, Molly Hatchet, Black Foot, and the mighty Lynyrd Skynyrd all spent time on my turntable, needless to say, I’m going to be a hard nut to crack.

With a drumkit festooned in ‘Dream Catchers’ and a microphone stand draped in Native American feathers stood on the stage, all we now needed was an animal skull and a Vulture pecking at it and tumbleweed rolling across the stage and we’d have the full set of cliché Southern Blues Rock props.

The band strikes up, and all bar the singer is on stage. Twin guitars tonight, dressed in cowboy hats and sporting Les Pauls they are on either side of the stage with Mr. Bassman making room at the back. The Musician Pub isn’t the largest of stages or venues, with a 200 cap, but thankfully they seem to fit on with room to spare.

And then his big entrance, complete with a snake-wrapped walking stick, Rob the vocals staggers on stage looking like a travelling healer peddling a cheap elixir of life that he’s imbibed in a little too often and, sadly, it’s failed to work, badly. My heart sank, I had such high hopes.

How wrong could I be, after getting my breath back, this polished motley bunch of unsuspecting ‘Cowboys’ proceed to put two fingers up to the world of Covid and played an honest set of ridiculously good Southern Blues that whilst being entertaining and enjoyable it was never overtly pastiched.

With twin guitars grinding away, some lovely lead work by Fred, a great cowboy name is Fred btw, backing vocals and sunglasses by ‘Moose’, that’s better, and elixir imbibing Rob with his gymnastic manouvers, harp playing, and youthful antics belting out the vocals in his distinctive rasping way upfront, there was always something happening on stage to bring each song to life which made them fun to watch as well as listen too.

With this great interplay, it was evident that these guys loved what they were doing and each other. The smiles were infectious and before long the sedate crowd is up and dancing along, foot-tapping and singing to the catchy hooks, the band had nailed it. They cut their teeth doing the rounds playing covers but have since moved on to doing their own, original material. The time spent peddling their craft has moulded a tight ‘Posse’ and it shows. Several bands on the circuit today could learn a lesson or two from these boys.

With great-sounding guitars, a blues harp, and a drummer who can keep time, the night simply got better and better. With song titles like ‘Up Shit Creek’ and ‘Beef Jerky Boogie’ to ‘Fire and Gasoline’, which made it onto the Planet Rock playlist, and set closer ‘Ruby Starr’ the single from the new album ‘Aces and Eights’, throw in a whole load of ‘Whoopin’ and a ‘Hollarin’ and it just doesn’t get any better, put it all in a small sweaty venue filled with folk enjoying live music and you have a really great night.

What a great way to get back into live music.

All that’s left to say is ‘Night John Boy’

Tune To E: I COME IN PEACE

DON’T HIDE BEHIND YOUR WEAKNESS>>>

INTO THE GREAT UNKNOWN

>>>IF IT AINT SOUTHERN

Sons of Liberty are: