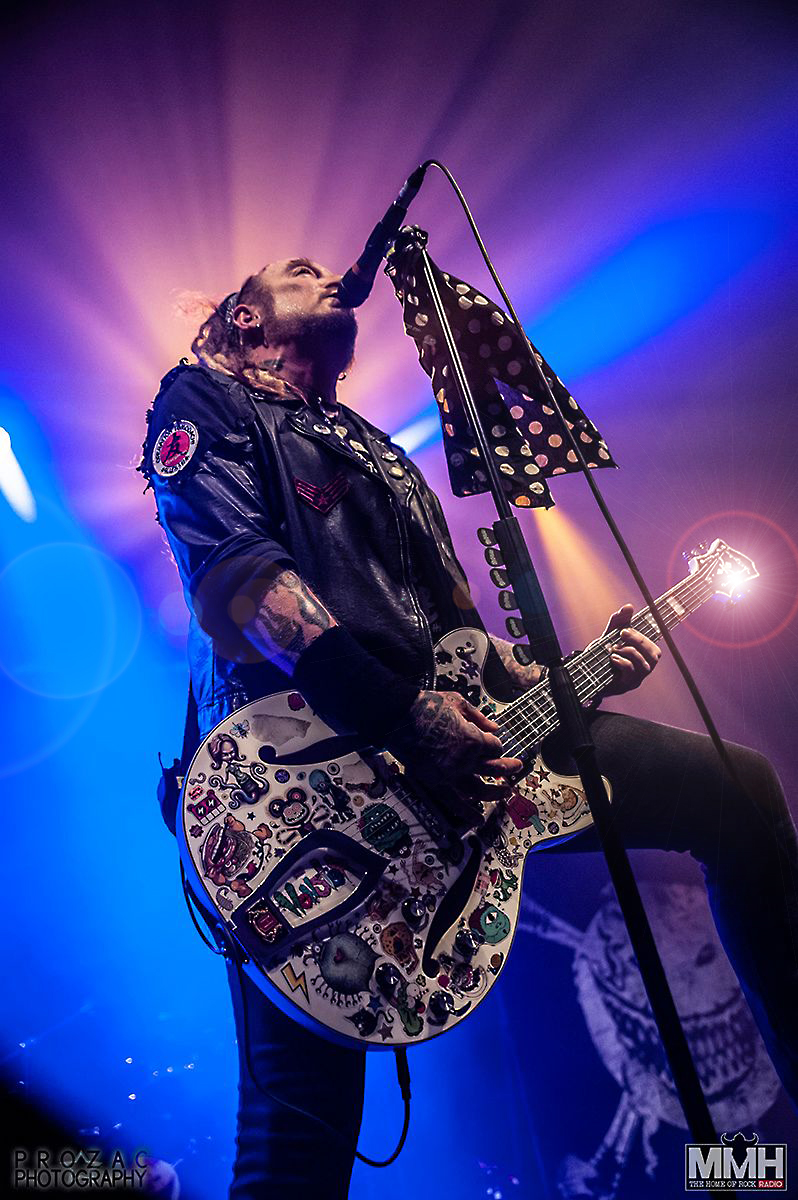 Sing-A-Long with The Wildhearts!

Tonight’s opening Act were Pennsylvania rockers ‘CKY’ and whosever idea it was to put them on at 6pm clearly thinks the Manchester Rock Scene needs to be tucked up in bed by 11pm. Fortunately this is not the case!
Manchester’s ‘O2 Ritz’ had already filled up sufficiently enough to make ‘CKY’ feel appreciated! Unfortunately for me, I only caught the last song which was their tremendous cover of the Gigi Allen number ‘Bite It You Scum’. Thankfully for the crowd they stopped short of punching audience members in the face and performing acts of self-mutilation!

‘Backyard Babies’ were next up and whilst the members of ‘CKY’ happily posed for pics by the Merch Stand with every passer-by, the Babies lead Guitarist Dregen stood on a podium shrouded with Dry Ice looking like Sweden’s version of our very own Keith Richards! They played an hour with the setlist mainly dedicated to tracks from their 2019 album Silver & Gold. I personally hadn’t seen the Babies since 2002 so for me it was nice to hear them play a few numbers from their ‘Making Enemies is Good’ album, which was met with glee and they certainly went down well!

With the shine of a torch from behind the set, ‘Don’t Worry About Me’ bellowed out from the speakers and the audience merrily joined in with the tune and welcomed The Wildhearts to the Stage. It’s hard to believe that they have been going for 30 years and still pull in the crowds up and down the country. It’s a testament to how much they are revered in Rock circles. I’ve said it before and I’ll say it again, they are one of the most under-rated bands in the world! The audience didn’t need any warming up, they welcomed Ginger, CJ, Dan & Ritch with open arms like they were old friends! It had only been 9 months since they last played in Manchester and bassist Dan took one look at the capacity crowd and uttered “Got a feeing this is gonna be Good!”
AND IT WAS!!

From the opening bars of ‘Everlone’ it was a night of Sing-A-Long with The Wildhearts!
Moving into ‘Diagnosis’ after dedicating it to anyone who has suffered with Mental Health issues and onto the ever popular ‘Vanilla Radio’, it all flowed seamlessly into one great tune after another!
Ginger then told Manchester that “Even though we’re not keeping tabs, I reckon this is the best gig of tour so far! Mainly because an hour ago I was dying in my bunk and Danny was lying in a Bin!”. The Power of Rock n Roll indeed!
After playfully asking “if anyone has had the corona virus yet and if not, did we want it?” It made me ask myself, “if this is them feeling under par, what the hell must they be like when they’re on top form!?!?” yes, I was a Wildhearts ‘live Virgin’ until tonight, but I’ll be coming back for me on tonight’s showing.

‘Greetings from Shitsville’ followed by ‘Let ‘em Go’ and ‘The Revolution Will Be Televised’. On the night the U.K. left the European Union, it led Ginger to comment that “In this current climate with political experts online, strange political choices being made by people who read dodgy newspapers!” which seemed like a fitting way to introduce the song on such a historic evening, not that anyone cared about that as they were there to be entertained and that they were.

‘TV Tan’ and ‘Top Of The World’ was followed by my favourite Wildhearts track. ‘Dislocated’ is a track I’ve played numerous times on ‘Pure Rock Fury’ because, simply put, I love it! I love the ferocity of the tune, the anger in Gingers voice and the integration of the melodic chorus. They do have an uncanny knack of writing catchy singalong choruses!

‘Sick of Drugs’, ‘My Kind of Movie’ was then followed by a short 2 min break. They re-entered the stage to rapturous applause and cranked into ‘29x The Pain’, then swiftly into ‘My Baby is A Headfuck’ and finished off with ‘I Wanna Go Where the People Go’.

The Wildhearts left the Manchester audience thoroughly satisfied in a hot sweaty cauldron of their own making. The crowd never stopped singing and dancing all the way through their set and a good time was had by all. There’s still time to get tickets to see them on this current tour, so I say, treat yourself, on tonight’s showing, you won’t be disappointed!!