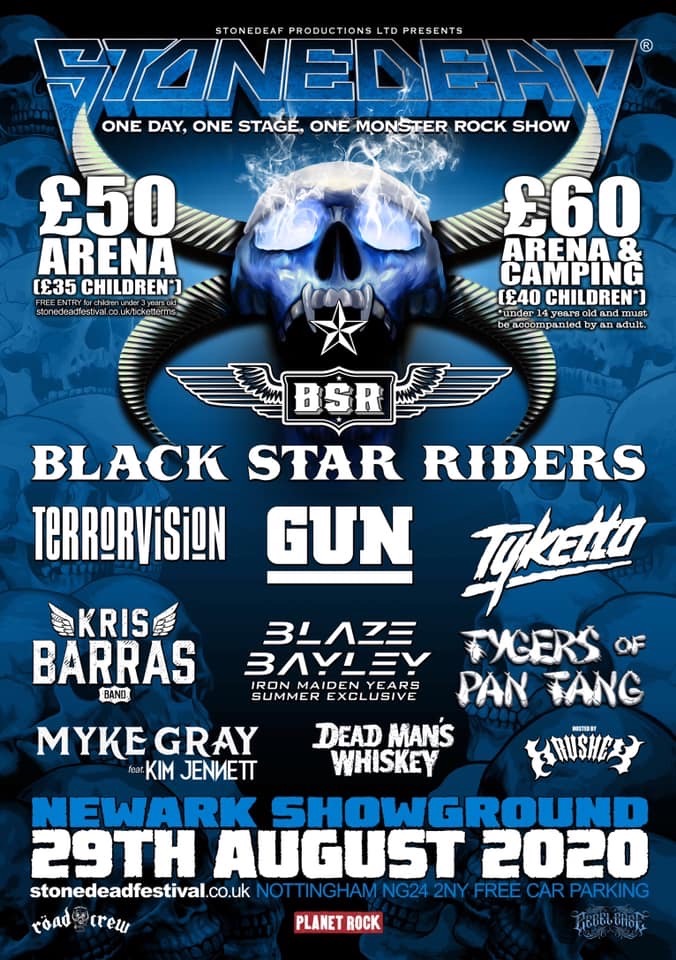 Legendary Scottish rockers GUN will bring an arsenal of hooky riffs and catchy songs to the Stonedead 2020 Tommy Vance stage. Celebrating 30 years since the release of their 1989 debut album Taking on The World, which saw the band tour with The Rolling Stones on their Steel Wheels tour in 1990. Momentum continued to gather when the band release Gallus in 1992 and an arena tour with Def Leppard followed. The Glasgow quintet recently released the double album R3L0ADED, featuring an amalgamation of their best singles from the band’s seven albums such as Steal Your Fire, Better Days and Don’t Say It’s Over, and a collection of cover songs, including the song that gave them a household hit Word Up by Cameo, for which the band won the prestigious MTV Europe Music Award for Best Cover. Dante Gizzi (vocals), Jools Gizzi (guitar), Paul McManus (drums), Andy Carr (bass) and Tommy Gentry (guitar) never fail to deliver, and are guaranteed to put on one hell of a show for the Stonedead faithful!

Jools had this to say about Stonedead:

We’ve heard so much how good Stonedead Festival is. The fact that we’re playing along with other great bands is very exciting. We can’t wait to play this festival. See you there!

Stonedead 2020 is an outdoor one day, one stage, monster of a festival where rock music reigns eternal. Stonedead is now firmly placed on the rock festival map and places the rock fan experience at its core. Come and see it for yourself! Stonedead Festival is carrying on its solid tradition of bringing both well known and new rock bands to Newark Showground. Stonedead’s unique line-up aims to excite both classic and new rock fans in providing a spectacular one day, one stage festival where the music is loud, the beer and food are priced competitively and you can camp / park 5 minutes from the arena. The festival is being solely organised by volunteers, created for music fans and is a festival experience not to be missed. With a free signing tent brought to you in conjunction with Planet Rock Radio. We have a dedicated covered wellbeing area with seating and sun cream! We allow alcohol to be brought into the arena – 4 cans of ready mixed spirits or beer / cider.

PA tickets are free with email proof. Sheltered indoor premises available for those who need it, near the first aid tent, with a fridge for medication, accessible toilets, and permanent shower facilities for disabled camping tickets and a staffed viewing platform.