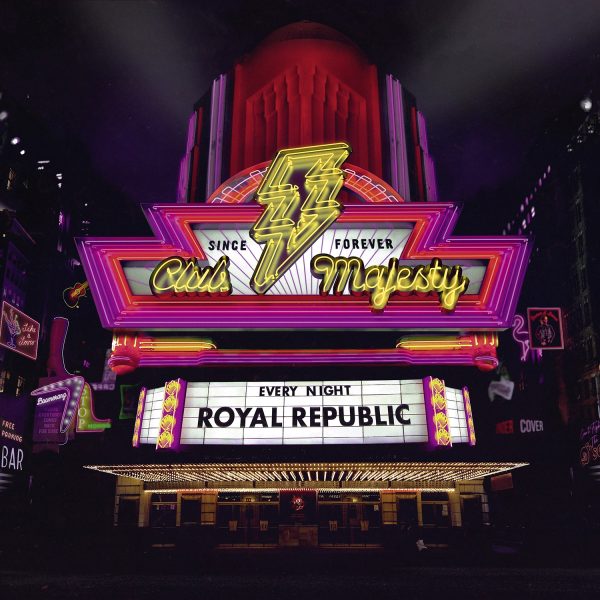 So, this week I’m looking at something a bit different. Club Majesty is not the type of album that I ever expected to be released via Nuclear Blast Records (and Arising Empire), you know, that massive record label known for its hard and heavy roster of metal bands. This is the fifth album from Royal Republic, and if you’ve heard them then you know why I’m surprised. If not, then just be aware that the following review casually throws around words like ‘disco’ and ‘funk’ with gleeful abandon. Hardened metalheads, you have been warned…

If it wasn’t already clear, Club Majesty is not a metal album. Sorry. For a point of reference, it’s as if Styx, Franz Ferdinand and Nile Rodgers all got pissed while listening to 70s disco then decided to make a record together. The purist rock fan would file it under ‘guilty pleasure’. It’s still a rock album, but not in any classic sense. The riffs are a mix of funk and early noughties indie rock, and, from a technical perspective, shows that there is a lot more to rhythm guitar playing than just picking fast enough to make James Hetfield jealous. The rhythms are heavily disco influenced (if song titles like “Can’t Fight the Disco” don’t make it obvious enough) and the whole thing is aimed at getting people up and moving. The band aren’t modest about it either, particularly on “Flower Power Madness” where they demand that ‘someone call a doctor because this beat is f**king sick’. It does get very wearing at times, with tracks like “Stop Movin” endlessly repeating the same lyric until you feel like you are being brainwashed by a sickeningly optimistic 80s dance instructor. But then the infectious choruses of “Boomerang” and “Undercover” more than make up for it, both leaning heavily on an indie-disco crossover with a charismatic vocal performance that is part Elvis Presley and part Graham Bonnet. The real highlight is “Blunt Force Trauma”, a funk-rock hybrid with a brass section filling out the melodies, completed by the best vocal performance on the album. Vocalist Adam Grahn shows he can perform multiple styles on “Anna Leigh” where the chorus mixes melancholy melodies with a Bee Gees style falsetto (the track also features the albums heaviest riff in place of a solo). He switches back to baritone on “Fortune Favours”, adding his deep intonation to spaghetti western guitar lines and fuzzy bass, with lyrics that takes shots at mainstream music trends. There is nothing shielded about it, and while lines like ‘drop the bass you f**king twat’ may get a wry smile from listeners, once the novelty of the initial shock has worn off the song has very little to offer.

Club Majesty is one of those albums that is difficult to classify, and as such can be enjoyed by just about anyone. Most tracks are difficult to be objective about because it is just fun, plain and simple. In the same way that you see a John Wick film because you want to see a stylishly executed action film, you would listen to Club Majesty because you want a light-hearted, upbeat and catchy rock album. John Wick isn’t going to win an Oscar, and Royal Republic aren’t going to give you a masterclass in musical virtuosity or lyrical genius. If you accept them for what they are, they are a tonne of fun (albeit with the odd misstep along the way). In a few days I will probably revert to my natural cynical state and find the overtly optimistic nature of this album incredibly irritating, but for now I’m going to stick around and enjoy the party.

Club Majesty is available from 31st May via Nuclear Blast Records and Arising Empire and can be purchased here.