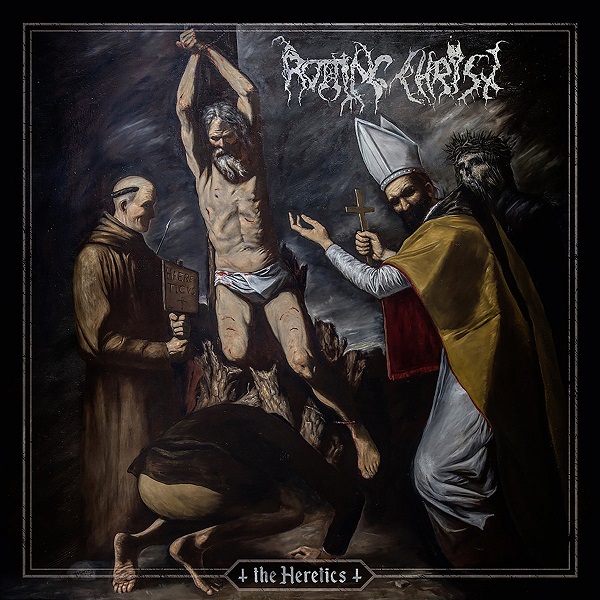 Perhaps the most prominent group to emerge from the Greek metal scene, Rotting Christ have been steadily working away for over three decades. The song-writing flair of frontman Sakis Tolis, coupled with a willingness to incorporate various different influences into the music, has no doubt helped their longevity and cultivated a loyal fan base worldwide. Even at this stage of their career, there appears to be no signs of slowing with the release of 14th album The Heretics.

For fans of the group, your enjoyment of this record may very well depend on how you’ve felt about their output over the last decade or so. Rotting Christ seem to have become a bit too comfortable for my liking, with their previous three releases being very similar to one another. Some fans may hope that the the band’s old logo adorning the album sleeve is indicative of a shift back towards a more aggressive sound, but this is not the case, as it’s very much in the vein of the style started with Aeolo. I can certainly find merits in this approach, and whilst there’s been some great material on the past few records, it was starting to wear thin with 2016’s Rituals. Three years later and with the same wheels being spun on The Heretics, things are well and truly stale.

Whilst the novelty may have worn off, there is still an incredibly appealing element to Rotting Christ’s music that cannot be overlooked. There’s an alluring yet sinister atmosphere that permeates through their music, and it’s once again at fever pitch on The Heretics. The Gregorian chants are overdone for sure, but they are vital in creating the sense of wickedness and evil, so I can overlook that. Sakis also sprinkles his sublime guitar melodies throughout the record, although don’t go expecting anything as hypnotic as “Fateless” or “Grandis Spiritus Diavolos” to pop up. His playing has always been very distinctive, so you feel like you’re getting something special whenever you listen to Rotting Christ. However, in spite of the captivating aura the album has, too few of the songs are engaging enough to really entice the listener. The drum work is very pedestrian, and there’s few (if any) riffs with any real bite that were common in the band’s earlier works. It feels like there’s something missing… like perhaps there’s a visual accompaniment required to get the full experience. You listen to the fiery, tremolo driven monologue of “I Believe” or the simple, chugging drones of “In the Name of God” for example, and whilst there’s some interesting ideas, you can’t help but think… is that it? No doubt the less is more approach works on some songs here (mainly the pre-release tracks, which are comfortably the best offerings), but there’s too much that feels bare bones.

I always take the time to check out a new Rotting Christ album, and whilst I don’t regret giving The Heretics a few spins, I won’t be in a rush to revisit it soon. There’s nothing here the group haven’t done better in the past. Whilst the album invokes a certain darkness that is unique to Rotting Christ, it’s not enough to save the sub par song-writing that plagues much of the record. Think this one is destined for the ‘fans only’ category when all is said and done.

Highlights: “Heaven and Hell and Fire”, “Fire God and Fear”, “The Raven”

Find out more on Rotting Christ:

The Heretics is available on 15th February via Season of Mist, and can be purchased here.