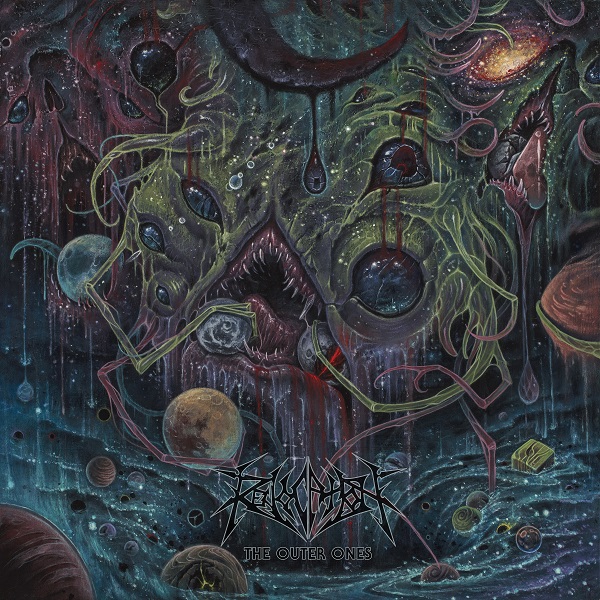 Revocation have long been chipping away at their tech death template, continually reworking and refining it on their quest to produce a genre benchmark. With close to twenty years and eight albums under their belt (including their output as Cryptic Warning), the four piece have been edging ever closer to something special. Endeavouring to concoct their darkest offering yet (typified by the grotesquely brilliant sleeve art courtesy of Tom Strom), they may just have done so with The Outer Ones.

I think the most important thing for bands like Revocation is to not let technicality transcend song writing, as it can be very easy to lose focus and descend into farcical levels of self-indulgence. Revocation’s material has typically required a fair amount of patience to digest, but their technicality has always been exhibited within the framework of structurally sound songs. Whilst it can sometimes take a while to get your head around what’s going on, Revocation have generally been able to bookmark each track with particular riffs or melodies; signposts that reminds the listener that they’ve been here before. The band have never afraid to show off their skills between these signposts, but it’s usually been with the purpose of serving the song; this album is no different.

It’s vital to have a clear mix for this sort of music. Thankfully, producer Zeuss has got the balance spot on here, as every instrument is audible without any one aspect being too dominant. The clarity allows every note to be heard, accentuating the super tight playing and razor sharp riffs. It’s not the heaviest of albums in a purely sonic sense, but there is an overarching dissonance that runs right through the record that makes up for it, most notably apparent in the well-crafted melodies that are littered throughout. That said, there are a number of riffs designed to bruise and bludgeon, making for a nice blend of brains and brawn. “Of Unworldly Origin” perhaps shows this best, with spellbinding leads meticulously splashed over a flowing, intricate death thrash body.

Elsewhere, the title track expertly assimilates a multi note motif into a simple, crushing groove, with a main riff that exudes a boundless energy and a solo that channels something otherworldly. “Fathomless Catacombs” takes on a form of abrasive melodeath and features some of the more guttural vocals found on the record; a more menacing and convincing approach than the slightly higher grunts that command much of proceedings. The riff that opens “Luciferous” is an absolute sledgehammer, cracking convention and paving the way for a song that is in a constant state of flux; conversely, the riffs of “Blood Atonement” bubble under but never really come to the boil. The doomy dirge of “A Starless Darkness” morphs into a more nimble beast following a winding melody mid song; a succinct mini epic that packs a vast sense of progression into a concise seven minute run time.

Revocation have always been a solid and dependable band, but I never felt they’d done anything truly spectacular. Whilst I will hesitate to lavish that sort of praise upon The Outer Ones for the moment, it does see the band continue to develop and create one of their strongest albums yet. A cacophony of angular, obtuse riffs wrapped in an undercurrent of melodic disharmony and mechanical brilliance, there’s no doubt that Revocation have taken a massive step towards the tech death summit with this album.

Highlights: “Of Unworldly Origin”, “The Outer Ones”, “A Starless Darkness”

Find out more on Revocation here:

The Outer Ones is available on September 28th via Metal Blade Records, and can be purchased here.