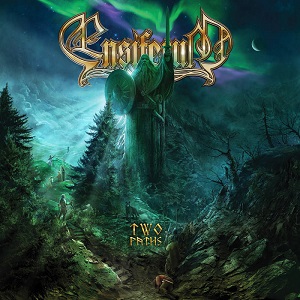 Folk metal began to flourish towards the end of the last century, and Finnish five piece Ensiferum were at the forefront on the movement. Their two albums with Wintersun mainman Jari Mäenpää, as well as the first two with replacement Petri Lindroos, are highly regarded by scene enthusiasts, but since then their output has been a little wayward. With new accordion player Netta Skog in tow, Markus Toivonen leads the way as the group looks to get back on track after the lukewarm reception of their past two releases.
Two Paths is an incredibly apt name for this album, as it does feel like an album of two halves, with a notable shift in overall tone after fifth track “King of Storms”. Perhaps the band struggled to pick up the pieces after this metaphorical deluge of lightning and water, but for whatever reason, the latter half of the record comes across as less serious and more light hearted than the first and, in truth, it suffers for it. In folk metal, it’s difficult to find that balance between serious and silly, but the opening five tracks pretty much nail it. Conversely, many of the last six really ramp up the rambunctiousness, and whilst I don’t doubt the dedication and craft of the band, it really does feel like less effort has been put in as the album wears on.
For all the cheesiness that emanates from “For Those About to Fight for Metal”‘s title, it’s a solid piece of songwriting, with a nifty main riff, a driving rhythmic foundation and a catchy chorus. “Way of the Warrior” is somewhat similar, although it dials down the aggression slightly, with some memorable harmonies and a notable key change in the final refrain (a feature underutilised in metal). The calm, soothing bass tone of the title track eases you into the song, with some gorgeous keyboard work backing some pretty poor clean vocals. This questionable vocal work (a regular occurrence on the record) drags down an otherwise fine song, with only the harsh vocal attack of Petri Lindroos really having any reliability. The track eventually progresses on to heavier pastures, but structurally, it’s a bit of a mess and ultimately misses the mark. “King of Storms” gets us back on track with a solid slice of melodic death metal, complete with a fine solo section and sing along moments. It’s quite striking how subversive the folk elements are on these tracks, if only in comparison to what is to follow, and perhaps that is where the strength of the early part of the record lies.
“Ride of the Valkyries” is where Two Paths takes a nose dive from which it never truly recovers, as at this point Ensiferum seem to want to play up to numerous negative tropes of the folk metal genre. The jaunty melody and pulsing bass of the verse are merely an appetiser for the irresistible dance beat and gang vocal line of the chorus, but overall, the song is a bit too cheesy and under cooked. “God Is Dead” is a similarly danceable tune, but falls foul to the dreaded drunken pirate sort of vibe that Alestorm and the like have been spinning for the past decade, whilst the shifting tempos of the straightforward “I Will Never Kneel” never truly finds their groove before ending somewhat abruptly. “Hail to the Victor” at least veers back to a more straight faced direction, with a mid paced, quasi melodeath/doom workout that is surprisingly sombre in nature.
As mentioned, Two Paths is an album of two halves. The front loaded first half is unquestionably the stronger of the two, with songs that, although unoriginal, are still relatively well written and enjoyable to listen to. The second half finds the band in party mode as they up the fun factor. I don’t mind this band (or any) dipping their toe into this sort of thing, but Ensiferum lay it on too strong here, and it comes across as if they’re trying too hard, whereas those early album cuts sound like a band letting it flow naturally. This would’ve been a far better record had they curbed the corniness. So yes, an album of two paths, but there’s clearly only one direction Ensiferum should’ve opted for. Here’s hoping that’s where they go next time.
Rating: 2.5/5
Highlights: “For Those About to Fight for Metal”, “King of Storms”
Find Ensiferum online here:
Facebook
Twitter
Official Website
Two Paths is available worldwide on September 15th via Metal Blade Records, and is available to purchase here.