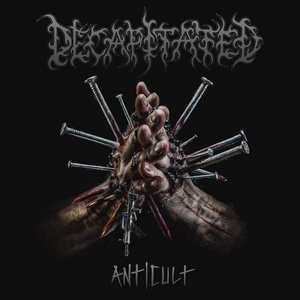 The legacy of Decapitated stands as a relic in the world of technical death metal. From their explosive debut, recorded when the band members were all still mid-late teenagers, they have championed technicality on most of their albums. Through success and tragedy, and through changes in personnel, the band has changed greatly throughout the years. Now we arrive at their seventh full-length album and Decapitated have taken their latest musical direction even further. Anticult seems to be their least technical and most groove-oriented project and the result, although respectable in its exploration, is unfortunately quite forgettable.

Decapitated shine in the element of technical play, as shown at the beginning of Impulse. The album’s introductory segment features nice lingering highs which embolden low bursts of off-kilter rhythms. However, the track quickly turns to a traditional, untechnical groove section. The playing seems to revolve around the chugs of genres like djent, but without having the complex mathematical edge that a lot of the aforementioned movement offers. Thus, it sounds more akin to genres like groove metal and even metalcore. The song eventually builds to a breakdown, a moment which is again centred around the simplified and immediately gratifying rhythm sections often found in hardcore music and its derivates. We get a similar kind of breakdown in Never towards the middle point and at the climax of Kill the Cult, which even has a slight Nu Metal flavour. Admittedly, this last one is the strongest of the three, as it is well-written and a satisfying close, but still lacks some flare to distinguish it from the sea of breakdowns that exist in today’s metal scene. As a style that is so popular amongst modern metal bands, one must really bring something unique to the table to avoid being thrown onto the pile. It seems to me that Decapitated, as talented and proficient with their instruments as they are, had a chance to blemish this metal style with streaks of their classic tech death sound. This opportunity for the most part was missed, and thus we are left with an album that does not feel much like Decapitated, and instead too much like the wave of metal bands during the past two decades in the USA.

Coupled with this move away from technicality is also a move from their former brutality. A key contributor to this is the vocals. Whilst Rasta is by no means unskilled, his style of growls lacks the ultra-low register, thick, booming power that Covan and especially Sauron excelled at. Rasta’s tone is raspier and less monolithic, and once again feels more akin to the hardcore style than the death metal one. And although on albums like Carnival is Forever, the technical presence compensated for this, leaving me much more accepting of Rasta, now on Anticult with the technicality gone too I find myself mourning the older vocal styles. One moment where his vocal shines though is in Earth Scar, as the chorus features some rustic, earthy pseudo-cleans through harmonic guttural vocals similar to Gojira.

In terms of the crushing brutality in the instrumentation, it is present at times. In Deathvaluation we get a pummelling, thrash-paced portion around the thirty second mark. We also get flickers of brutality in the bridges of One Eyed Nation and the barrage of double bass at the start Anger Line. And whilst there are complex timings amongst the chaos of the Anger Line intro, in much of the other harsher segments of the album, like for example where the song Anger Line progresses to, the music is put together in a very linear way. Decapitated’s push to simplification is not inherently wrong, it is fine for a band to desire to move away from one genre and into another. The problem is Decapitated do not seem to offer anything that is distinctly them with this shift, and perhaps if they had utilised and incorporated their older sound a bit more, this issue would have been avoided. Luckily, the album ends on a high, as Amen delivers a slow, menacing outro. But at this late point, the album has already shown its hand, and minds are already made up. Decapitated still have all the potential to turn this sound into their sound, but it has not quite been realised here.