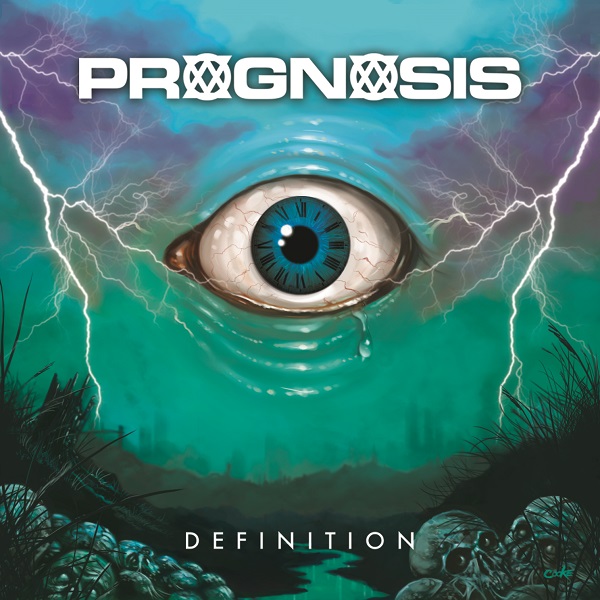 I always become apprehensive when I hear the word ‘progressive’ bandied around in relation to newer metal bands. In its traditional format, progressive music leans towards complex arrangements, instrumentation and time signatures. None of these elements are missing from modern progressive metal, but the genre is now a blur of bands just hammering out ‘djent’ style riffs on seven & eight string guitars, often forgetting they have the original six to use as well. Granted, this style has yielded some formidable acts (take Periphery and TesseracT for example) but there is a lack of variation that defies the definition of the genre. While broadly labelled as progressive, Manchester based Prognosis are seeking to defy such genre boundaries with their debut album Definition, citing influences ranging from Dream Theater to Muse, Jeff Loomis to Death. If writing an album were not enough, co-guitarist and vocalist Phill Weller has also written a series of short stories to expand on the fables told through the lyrics (not yet available at time of writing). For a debut album this seems like a hugely ambitious, and somewhat risky, undertaking. As the written narratives are not yet available to judge, for now at least, the music must speak for itself.

A driving bass guitar launches opening track High Road, quickly developing into a rhythmically focussed riff underpinned by some ferocious double-bass kick drumming. Within the first minute the band have displayed an array of musicality most bands don’t show in an entire song: harmonised guitar lines, odd time signatures and synchronised drum and guitar lines. It all flows together as an incredibly pleasing piece of music that sounds somewhere between Trivium and Gojira. Once the vocals start you begin to see the groove metal influences in a melodic yet aggressive vocal delivery in the style of Soil and Drowning Pool. The vocals switch from bassist Danny Daemon to guitarist Phil Weller for a cleaner, more dissonant section, delivered over a combination of fast alternate picked riffs from one guitar and descending octave riffing from the other. This descending rhythm section leads you nicely into a chorus with, dare I say it, a hook? But why not indeed. For a song that has already showed technical capability, aggression and haunting melodies, adding an impassioned singalong wraps up a full package of metal tropes, carefully assembled in a way that just works. The Trivium influence is clear again in the main riff for Echoes (it could comfortably fit in on their Shogun album). The vocals let this track down slightly, sounding a little too distant and thin considering the fat and punchy sound of the rest of the mix. Hints of black metal make an appearance on Downfall by way of a fast tremolo picked riff that is matched by the double kick drumming. The most melodic moments on the album come via The Sycophant. The odd rhythms and riffs that open are reminiscent of recent Mastodon work, but then the verse has a very straightforward chugging rhythm by comparison. An arpeggiated backing guitar brings in the chorus that takes this song very close to an epic or righteous feel, for a fleeting few seconds at any rate.

Out of the nine available tracks, only six are actual songs. Isolation, Repentance and Legacy are all prelude tracks of the style most often found at the opening of an album. Normally, these tracks do not require much consideration, but to have them making up a third of your track list shows the musical ambition of Prognosis. Isolation seems to be intended as a piece of music in its own right, rather than an introduction to the following song. It is one and a half minutes of harmonised tremolo picking, with no drum parts at all. It serves as a chilling interval, and conjures up images of pagan rituals being carried out in a forbidding forest somewhere (all filmed in monochrome obviously). Repentance is more obviously meant to introduce The Sycophant, the melodic nature of which is set up here. A clean, Metallica-esq guitar line is supported, in turn, by strings and then a lead guitar that briefly builds the piece before launching into the main piece. Legacy is the truly daring track of the three: a one-minute monologue, presumably delivered by the author of the accompanying short stories, guitarist/vocalist Phil Weller. Doubling up the voice an octave lower and adding dramatic pauses does little to hide that this is a poor oration. Speaking in a grandiose fashion about time, eternity, and the human condition, this is ambitious and covers ground that has been discussed in much better terms by not just other musical artists, but authors, philosophers etc. Ultimately, whether this is a cliched waste of a minute or a genius interlude in the musical proceedings will be decided by the individual listener. I suspect this kind of material would be better consumed in a written format and, regardless of my comments on the track, I do look forward to how it will be written in the accompanying short stories.

Definition is an album that deserves your full attention to absorb and appreciate all that is being put across. No amount of literary description can really do justice to what Prognosis are trying to achieve, it can only help to draw people in and judge it for themselves. The ambition of the album is admirable and, for the most part, fully realised. Guitar parts are technical enough to enthuse the musically minded listener, but not so much that they alienate the people just after a good headbanging riff. The arrangements blend both odd and straightforward time signatures, going from fast paced aggression and bouncing grooves to erratic rhythms and melancholy melodies. The tracks are engaging and captivating: you want to hit repeat just to see what else you can discover. Having three out of nine tracks as short instrumentals leaves you feeling a little short changed, and that monologue will undoubtedly be divisive, but those who don’t like it can just skip it and that is that. Ultimately, this is a hugely promising debut from a band who look set on filling the gap left behind by bands like Mastodon and Trivium in the spectrum between progressive and extreme metal.

Definition is released on September 21st 2018 and can will be available from Bandcamp and major streaming platforms.