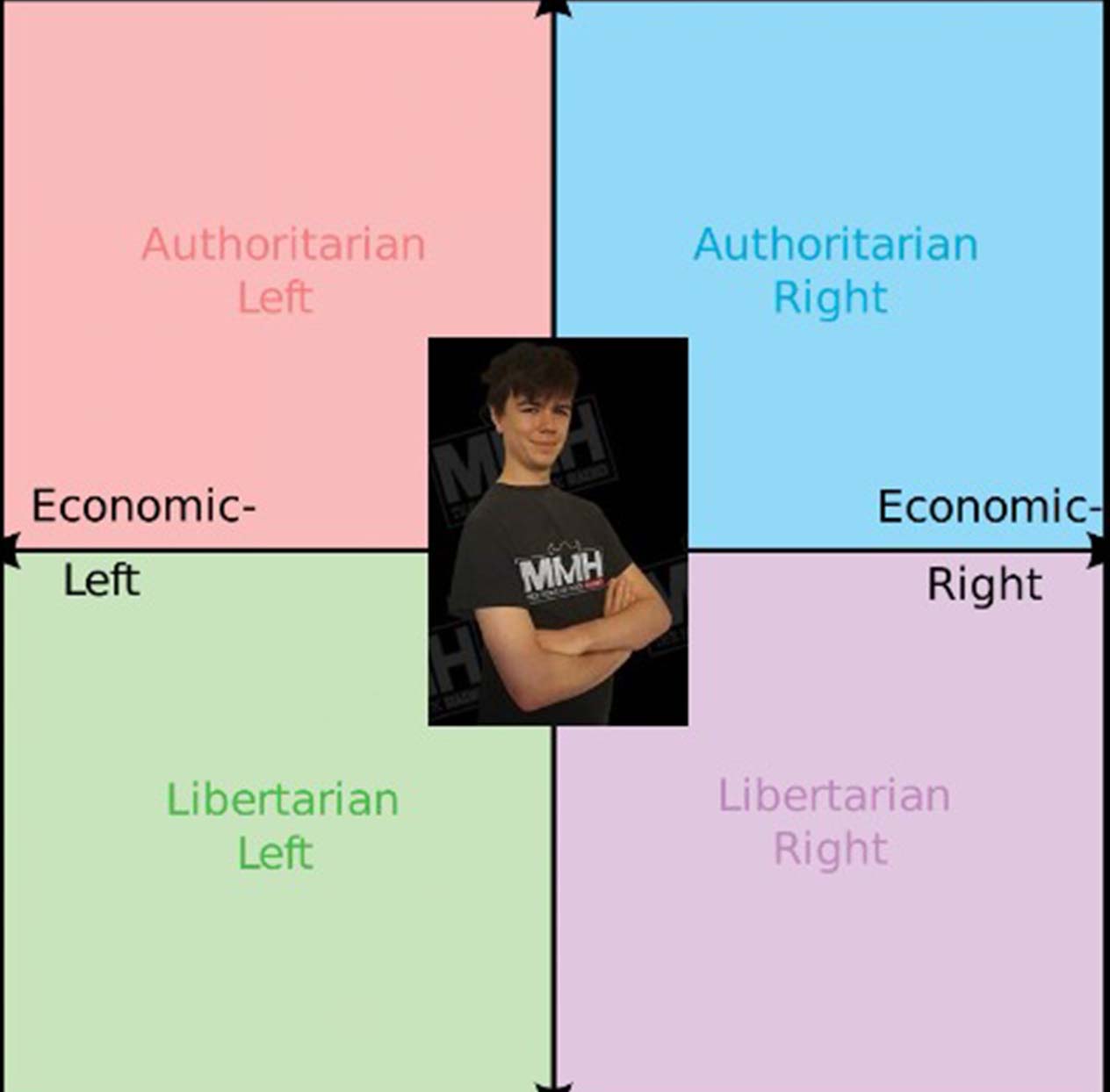 Just what we need right now: more conversation about politics. Thankfully though, this article isn’t for you. It’s for me personally to exorcise my frustration at comments like “keep politics out of music” and similar nonsense. However, if you wish to stick with me, we’ll be digging though the history of heavy music and discussing how inseparable politics and heavy music are. Don’t worry, I won’t be arguing that all art is inherently political- that’s not an argument I feel qualified to make, and I don’t think it’s necessary or convincing in this case. I do hope that this is at least mildly interesting- or failing that a hilarious mess from which you can extract some modicum of joy.

For clarity: while I have tried to remain politically neutral while writing this article- any political opinions expressed are entirely my own and do not represent the official position of MMH.

The place to start with this conversation is the starting point of all discussions of heavy music: Black Sabbath. A cursory inspection of Sabbath’s early catalogue reveals many songs of a political nature- War Pigs, Hand of Doom and Children of the Grave being notable examples- and while these themes aren’t present in all their works, or the work of those who followed in their footsteps, it demonstrates that politics has been part of heavy music since the beginning. Whether it’s Rage Against the Machine’s left-wing agitprop, or Judas Priest celebrating the feeling of the working-class defying authority in Thatcher’s Britain on Breaking the Law, politics will always be here whether we like it or not.

Of course, it’s not entirely convincing to just say lyrical narratives prove that heavy music is inherently political. I would wager that the majority of heavy music doesn’t have overtly political lyrics- but I would still argue that it is political. Even if no single song had a political theme to its lyrics, I would still make the argument that it is political. Why? When understanding the cultural significance and meaning of a piece of art, we can’t simply analyse the text itself. We must also consider the context and reaction to the art itself. So, when considering heavy music, we have to consider who created it, when, in what context, and the reaction to it.

If we take Black Sabbath as the definitive creators of heavy music- I will address any controversy on this point shortly- we can see that heavy music was created by working class men in an industrial city, with- most likely- little hope of a prosperous future. They created their music toward the end of the sixties, when “hippy” music was at its height- preaching peace, love and hope. Given this contrast and the vastly different sound Sabbath created, it’s easy to read the creation of heavy music as a rejection of this world view. How could four guys from Birmingham feel part of a movement calling for everyone to go to California with flowers in their hair, when they have to wake up and do another shift at the factory the next day?  Sabbath’s anti-war stance does line up with a lot of the hippy movement, but it’s the more nihilistic, apocalyptic, doomy take on the subject that characterises the difference. It’s a rejection of the mainstream- a feature that became core to heavy music’s culture going forwards. Rejection of the mainstream is an inherently political statement- “the established order doesn’t represent or work for me. I need something better”.

In terms of the reaction to Black Sabbath it’s a well-known story. Despised by critics and instantly associated with Satanism- something that plagues heavy music to this day- the mainstream rejected Sabbath as much as Sabbath rejected them. Sabbath, and subsequently bands like them, came to represent what was considered morally reprehensible at the time. It was no longer just about what the band actually stood for, but what people perceived them to be. The morals of a society are dictated, to some extent, by the political climate in which they exist. In extremely socially conservative societies, premarital sex could be considered a moral affront. As such politics wasn’t chosen for Sabbath, but thrust upon them by the society they lived in.

It is, of course, difficult to pinpoint when a genre was created- you may disagree that Black Sabbath are the originators of the heavy music- and while it’s possible to apply this analysis to any band you care to name, it’s futile as there are always more to discuss. As such, to dispose of any such objections, I will take us further back, to discuss the undeniable predecessor to heavy music: rock and roll. Should we be able to show that rock and roll is inherently political, surely it goes to suggest that its influence on heavy music means that all heavy music carries a similar political weight.

Let’s start with The King himself. Elvis is the face of rock and roll and, in the modern day, has a squeaky-clean image. But he was a figure of some controversy in his day, for example upon his second appearance on the Ed Sullivan show he was only filmed from the waist up. This was because his signature hip gyration was considered too sexual for broadcast. Remember, the moral standards of the time dictate, and are dictated by, the political climate. This may not be convincing of the inherent political nature on its own, so let’s look at something a little more foundational to the genre itself.

As with any genre, rock and roll drew from several inspirations for its sound. Jazz, Rhythm and Blues, Gospel to an extent, and so forth. While it goes without saying that music genres are not the exclusive domain of any one race, the inspiring genres for rock and roll where considered predominantly “black music”- which would have been especially meaningful in a time of explicit racial segregation. In fact these genres were distributed under the label of “race records” at certain points in history, not too far before the genesis of rock and roll. The fact that this musical genre was created with the influence of “black music”- and its creation usually credited to Chuck Berry- stands at odds with the fact that our discussion often centres around white artists- like Elvis and Buddy Holly. While it may be easy to say that’s just because they were the most successful- that overlooks the obvious advantage that white artist would have had in an explicitly racist society and how that the eras more harmful politics continues to affect culture to this day. In short- rock and roll was shaped, and continues to be shaped, by the politics surrounding its creation and that carries its weight into genres that drew from it.

We’ve spent a lot of time covering the roots of heavy music and metal in particular. However, we’ve not touched on punk. The anarchic spirit of punk has been much discussed but if this were genuinely a central part of the genre, why would The Dead Kennedys feel the need to write- and Napalm Death feel the need to cover- Nazi Punks Fuck Off? It’s simple. In spaces that are predominantly full of white, angry men who are sick of the established order, far right recruitment often thrives. With the core of a lot of punk music delivering the message that everything is terrible, and that the problem is with the establishment- a group offering counterculture focussed solutions to people who resonate with that message are likely to gain a lot of traction. The far right knows this and often uses it to recruit new members. This political battle between the stated goals of punk and the fact that makes it a perfect target for what could be considered the opposite political ideology is fascinating- and I think perhaps unconsciously has shaped the depoliticization of mainstream punk lyrics in recent years.

One area of heavy music that is inextricably tied to its early politics is black metal. Black metal is not a world that I typically exist within, so to do justice to this potentially contentious issue I decided to speak to an expert. Kevin Hoffin is criminology lecturer at Birmingham City University, who has researched and written about black metal, and we had a good, long chat about black metal and politics that you can listen to below.

Even with all of this put together I could exclude almost all of the cultural context and make what I think is the core argument for heavy music being political. The culture of heavy music is inherently political. Why do we all love heavy music so much? It’s not just the music, it’s the community, the sense of belonging- the mosh pit ethos of “if someone goes down you pick them back up”. When you go to a gig you now that you can chat for hours with the person next to you about this music. The stated goal of the community is to be a place for outsiders to come together and belong- I think that is relatively uncontroversial in our circles. The idea that we aren’t accepted elsewhere and come together in our own community, building our own space and wishing to be left to do our own thing, is what makes heavy music so important to so many people. Even if we removed the music as a common linking point the community remains- there are many people at MMH who have what I consider to be terrible music taste, but I still get on with all of them because of this community. And that, dear reader, is what makes heavy music inherently political. A commune created for us all to come together and just be ourselves, theoretically free of judgement. It’s the rejection of mainstream society and the established order that makes this music and community what it is, and what makes it inextricably political.

Special thanks to Kevin Hoffin for the interview and Emerican Johnson aka Noncompete for their video on stochastic terrorism- the concept mentioned in the interview with Kevin.