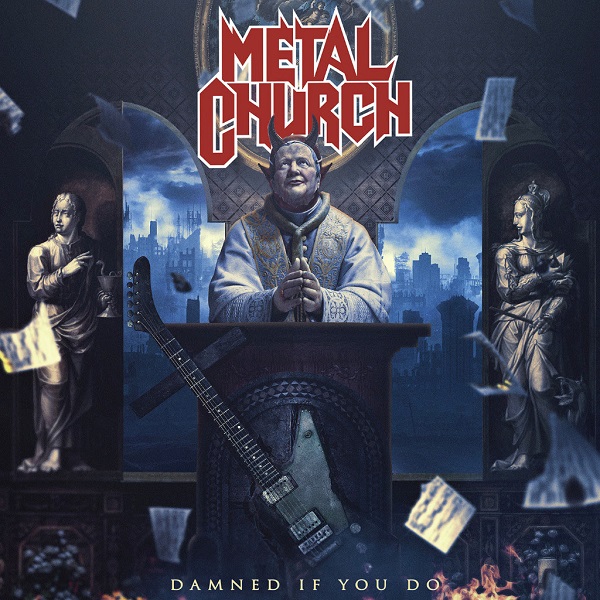 Metal Church are a long established institution of the US heavy/thrash scene. Despite a number of highly regarded albums released in their prime, they never seem to have got the recognition that many feel they deserve. With Mike Howe, who fronted the group on those classic records, reacquainted with the band after returning to the fold for 2016’s XI,  they’re looking to kick things up a gear with Damned If You Do.

The album starts well enough with the title track, which is a solid amalgamation of US heavy/power and thrash metal, driven by a relatively simple riff and Mike Howe’s gritty sneer. The chorus hook doesn’t over complicate things either, and as a whole, the song is good enough to draw you in for the tracks that follow. “The Black Things” then plays a blinder, with the ominous, melodic groove and hanging chords in the verses and the energetic surge in the refrain making for a dynamic listen. The nimble, mid paced thrash of “By the Numbers” is quite understated, but by the song’s end it’ll have likely wormed it’s way into your subconscious. By contrast, “Revolution Underway” is not so subtle with its melodies, and save for a somewhat aimless interlude, is a great song.

Four tracks down and forecasts are good, but from this point onwards there is not much of value. There is nothing downright bad, but Metal Church show their hand far too early and end up pulling from the same box of tricks for the remainder of the record. Truth be told, they’d showcased everything the album has to offer with the first two tracks, but the following two were strong enough that it was easy enough to overlook. “Guillotine” marks the cut-off point, and from here on out it’s a collection of competent but unremarkable songs littered with a handful of bright spots. There’s only so many times you can roll out the sort of basic, thrashing chugs that dominate the latter half of the record before it grows stale, and despite the best efforts of Howe and drummer Stet Howland to liven things up, they’re on a bit of a hiding to nothing. There’s some great lead work on “Out of Balance” and “The War Electric”, and “Monkey Finger” has the sort of mid paced stomp that’d get fists in the air at live shows, but it’s not enough to save the album as it nears its conclusion.

Damned If You Do starts well enough, but peters out quite quickly around the midway point and never recovers. I mused over why Metal Church never get the recognition of their contemporaries, and I think the evidence is found all over this album. Their hooks just aren’t as catchy and their riffs just aren’t as memorable. They have their qualities of course, and there is some value to this record, but it further cements their status as a capable B-tier band that’ll never manage to make the step up.

Highlights: “The Black Things”, “By the Numbers”, “Revolution Underway”

Damned If You Do is available on December 7th via Nuclear Blast Records, and can be purchased here.