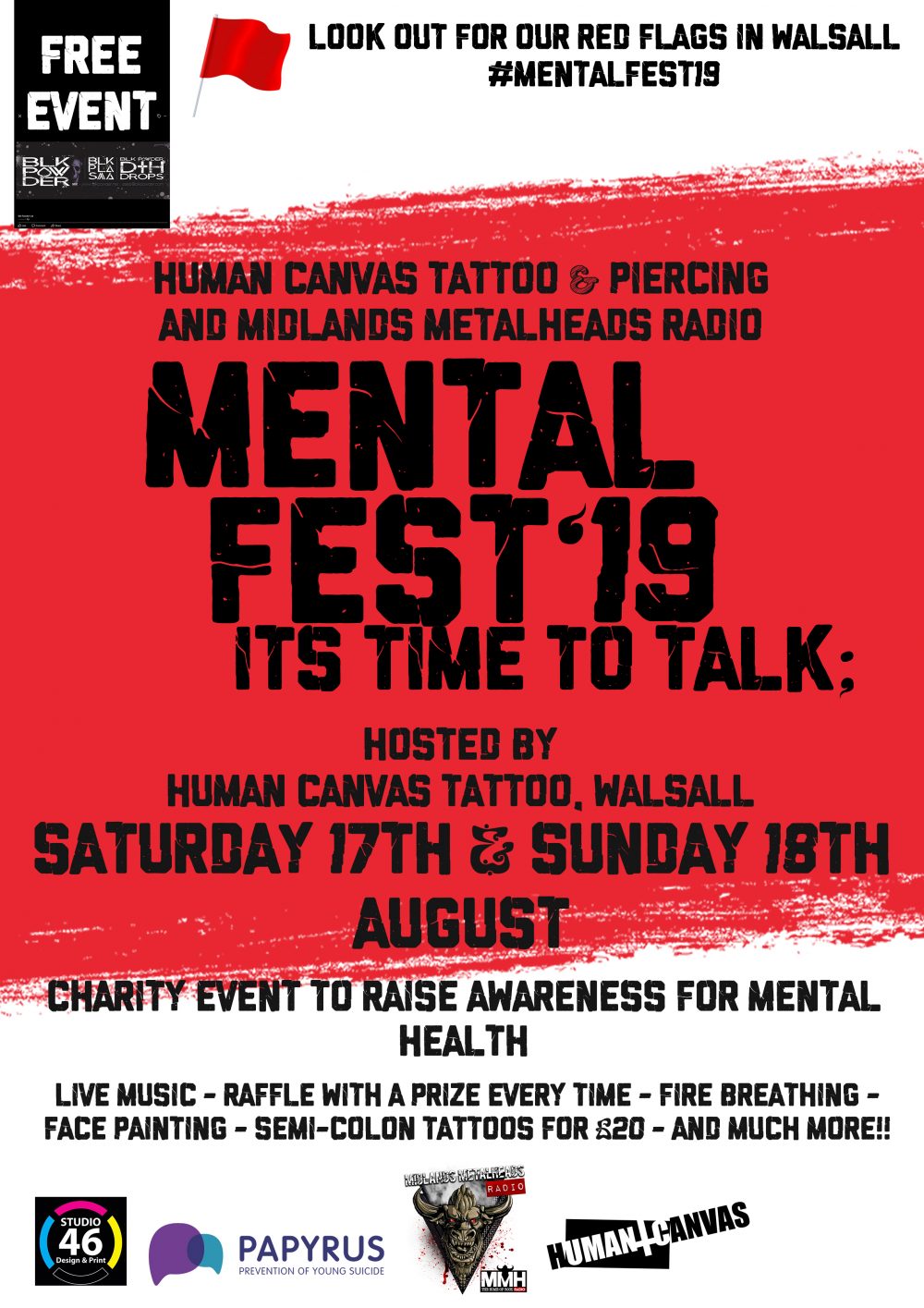 It’s time to talk. Mental health is important. It may seem an obvious statement but, despite massive improvements in the last few years, it remains a stigmatised topic. It may be a subject that you are unwilling to discuss, or feel uncomfortable talking about, or you might not even know how to talk about it. It also isn’t always obvious what someone is going through. The tragic deaths of high-profile people like Chester Bennington, Chris Cornell and Robin Williams have highlighted how someone can appear happy on the outside while facing an internal struggle that no one is aware of. This is why Mental Fest is returning to Walsall in 2019: to gather together like-minded people to break the stigma and encourage an open discussion in a friendly and welcoming environment.

There are some shocking statistics to show why this is still necessary, most notably that suicide is the biggest killer of people under 35 years if age in the UK. Because of this, 100% of all funds raised from Mental Fest will be donated to Papyrus UK – Prevention of Young Suicide. Papyrus aim to support those suffering with mental health problems and to equip people and communities will the tools and information needed to help others (more information on Papyrus can be found here). Mental Fest will be hosting several guest speakers across the weekend to further this aim, with topics ranging from the spiritual and psychic to the pragmatic mental health first aid approach of Mind Health Solutions (further details to be announced soon).

But that isn’t all that will be going on. Read on to find out what else is available over the weekend.

Hosting the event for its second year, Human Canvas Tattoo will be offering both permanent and temporary semicolon tattoos to those attending Mental Fest 2019. Tattoos will cost £20, with 100% of money raised being donated to Papyrus (both walk-in and pre-booked appointments will be available, although booking in advance is the best way to avoid disappointment).

For those who don’t remember their English lessons, a semi colon is a piece of punctuation (;) used to link two independent parts of a sentence. It marks a continuation. In the world of mental health, it stands as a message of solidarity against depression, affirming that mental health issues do not mark the end. A semicolon does not mark the end of a sentence, and so it symbolises that depression (and other mental illnesses) do not mark the end of your life. Human Canvas Tattoo have a large array of designs, so whether you want your first tattoo or want to add to your collection, there are plenty of options for this meaningful piece of body art.

It wouldn’t be a festival without music now would it? Mental Fest 2019 is bringing the best of local talent for a range of full band and acoustic performances. Featuring the melodic hooks of Failure is an Option, the punk extravaganza of SuckerPunch, Walsall’s answer to Steel Panther that is 4Q, the heavy breakdowns of Exiles and many more. So be sure to drop by and you might just find your next favourite band while supporting your local music scene at the same time. What have you got to lose?

Several local businesses have already pledged their support to Mental Fest. Right next to Human Canvas Tattoo, 12 o’ Clock restaurant has promised £1 from every food sale will go to Papyrus, and Buddies Hair Design is holding a raffle in support of the event. If you fancy a drink, then the Black Country Arms is just around the corner and offers a huge range of local beers and ales. It is also one of the few places where you can order a cob and not have the bar staff look at you in confusion…

Mental Fest 2019 could not be easier to get to. If you are on public transport then you can walk to the event from Walsall Bus Station or Walsall Train Station is around five minutes. If you are driving then there are several options all within ten minutes walk, including by the train station, The Saddlers Shopping Centre car park and the Crown Wharf Retail Park car park. Several supermarkets are also within walking distance, but only offer between two and three hours parking so be careful when using these.

So, whether you want to support a life changing charity, learn more about mental health, get a new tattoo, or just want to enjoy some great music with friends, Mental Fest 2019 is the place to be on the 17th and 18th of August. We hope to see you there!