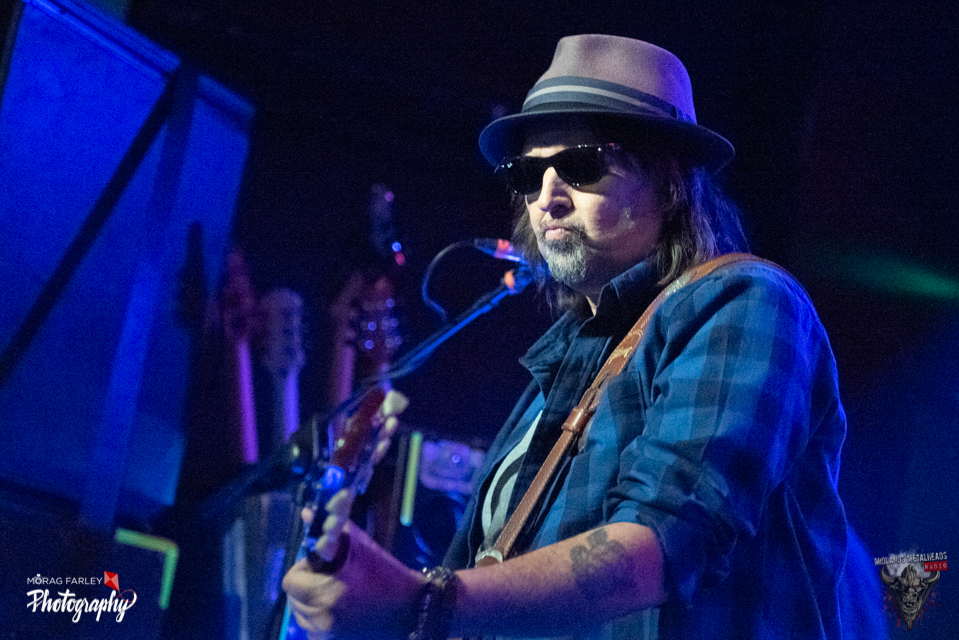 Dedicated Motorhead fans and lovers of hard rock have travelled far and wide to witness Phil Campbell And The Bastard Sons deliver a sold out performance at one of London’s most underrated venues. With a capacity of 250 people, it’s guaranteed to be an intimate experience that requires any attachment to your own personal space to be abandoned.
As Phil Campbell And The Bastard Sons return to playing a headline slot, it’s up to Leader of Down to provide a worthy opening to a night of honest rock n roll. The band is the brain child of late Motorhead guitarist Wurzel, with tracks from their debut album featuring vocals from Lemmy and snippets of guitars by Phil Campbell and Fast Eddie Clarke. With such a tight connection to members of one of the most infamous rock n roll bands of all time, it’s no surprise that Leader of Down provide a set of energetic hard rock with the sole purpose of permeating the audience with infectious riffs and high vocals. Songs such as Cascade into Chaos and People Say I’m Crazy are given a breath of fresh air live, with the latter being a reworked version that originally appeared on Wurzel’s 1987 solo album Bess. As a whole, the band win over the audience and prove to be entertaining, particularly frontman Matt Baker whose head movements seem to imitate a pigeon with a penchant for bluesy solos and distortion.

With the tone successfully set, Phil Campbell and The Bastard Sons grace the stage with roars of approval from the crowd. Opener Big Mouth is an explosion of energy, with frontman Neil Starr propelling his hair back and forth whilst clutching the microphone stand; a mesmerising image of pure power. The band are closely intertwined on a personal level and this is also reflected musically, as the group have reached the point of perfectly crafting their live attack.

With the release of 2018s The Age of Absurdity, the band now have enough original material to dominate their setlists without completely disregarding the chance to perform a selection of covers. Ringleader, High Rule and Get on your Knees are significant highlights, the bands trademark interaction with the crowd coming into full force through dividing the crowd against each other in a middle finger salute. Dark Days is conveniently placed in the middle of the setlist, providing a shift in tone from high volume rock n roll to a piece that is beautifully bluesy and melodic, demonstrating the potential variation that the band have to offer.

Hawkwind’s Silver Machine is dedicated to all the fallen members of Motorhead, the audience united through jumping in unison to the chorus, demonstrating the control and energetic incentive that the band possesses.
There’s no doubt that the Motorhead covers receive the greatest reception with Ace of Spades sending the front portion of the crowd into an ecstatic inebriated frenzy.

It would be easy to just play the most popular songs of their career, yet Phil Campbell And The Bastard Sons go the extra mile and uncover gems such as The Game, Rock Out and Just Cos’ You Got the Power, which are thrilling to see brought to life once more.

The band end with the rather fitting Rock n Roll, a successful conclusion to a night dedicated to keeping the Motorhead flame alive. Although rather far removed from days of playing world tours in larger venues, Phil Campbell seems relaxed and content with playing smaller stages alongside his sons. It’s a joy to witness his intricate guitar skills and flair in such a close proximity, especially when performing new material.

It’s intriguing to see how far this project will advance. Phil Campbell And The Bastard Sons have definitely surpassed the stage of being a one-off cover band, honing their own style whilst inevitably nodding their head towards the band that Campbell was an integral part of for thirty-one years.

Returning to the UK in support of Slash in February, there’s no signs of the bastards slowing down just yet.

Phil Campbell And The Bastard Sons can be found on the following platforms:
Facebook

Find Leader of Down here:

Photography taken by Morag Farley, photo gallery of Phil Campbell And The Bastard Sons can be found here