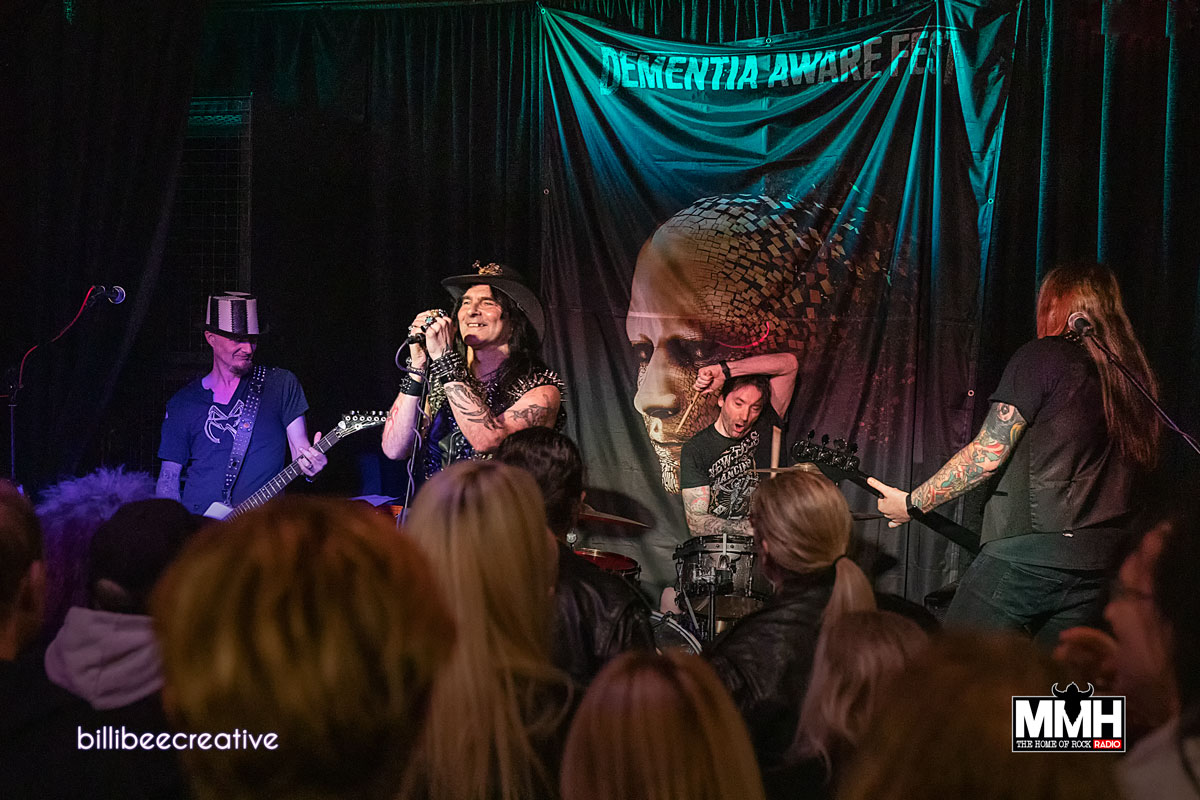 It was the first Dementia Aware Fest of the year at the Giffard Arms on Saturday. Seven bands playing from the late afternoon to the late hours. All in a good cause and there was plenty of friendly banter between the gig goers. Pete K Mally was the compere and there were stacks of music related prizes to be won with a raffle. With everyone in good spirits from the beginning, you could tell it was going to be one hell of a party.

GUNS FOR GIRLS have the pleasure of being first on stage. The Telford based band with drummer Alex Caldicott and Carl Haden on bass ( both also with Severn UK) and Gavin Herbert supplying vocals and guitar, get the festival going with ‘Over The Shoulder Of The Devil’. Then the recent single ‘Where Is The Sun’ gets the Giffard floorboards shaking and following that with the Royal Blood favourite ‘Out of The Black’ continues the heavy riff filled theme. Three songs from the self titled EP that came out last year are up in succession, ‘Dancefloor Crackwhore’ which has the most amazing sound, twisting the lowest of strings. ‘Death Of Rock And Roll’ is more of a rousing rocker, but maintains the dirty guitar. Clear lyrics from Herbert also make Guns For Girls a worthwhile listen. ‘It Takes All Kinds Baby !’ has the same type of groove, with added guitar screaming. They finish on ‘I found A Way’ and the crowd loved them. I do recommend going to watch Guns For Girls next time they are in your neck of the woods.

THE SUICIDE NOTES are like nothing else. Utter chaos as Gav leaves his drum stool to kiss the rest of the band and plays with a plastic Nemo in his mouth for a while. Frontman Billy T described on their FB as “Rusty tacks and moonshine lead vox & harp” F**kin swears with every other word and looks/sounds like a retro Tyla from the Dogs D’Amour. Alex on guitar and bassist Damien, just play, like band members usually do, a couple of cool guys ! Together the Suicide Notes are absolutely brilliant, I remember when there were a lot of bands knocking about in the late 80s early 90s, with the same kind of attitude and persona. ‘Black Dog’ and ‘Dope Fiend’ are thrown before us, Billy with his white rimmed sunglasses, mass of tattoos and oodles of charm, lays waste to any preconceived ideas you may have had about this lot. ‘Rag Doll’ is a flirt of a number, with some steady guitar and Gavin stays put behind his drum kit to the end. A bottle of Cloven Hoof Rum is handed to the audience by Billy and passed around until empty. While we all sing along to the cover of ‘Billy Two Rivers’ by the aforementioned Dogs. ‘Take A Bullet For Me’ and ‘Smoke It Like A Cigarette’ are sleazy, gutter born and pure rock n roll genius. The most original, humorous and evocative band I have seen for years. They will return to Wolverhampton for The Lord Mayors Festival, but you can also fall prey to them at HRH Sleaze and more of the Dementia Festivals around the country.

PSYCHOBABYLON   are next, I first saw Rusty D and company last year at the Waterloo Bar in Blackpool, during the Rockforce Festival and they were tremendous. Today they have the unenviable task of following the Suicide Notes, so it takes a few minutes of ‘Hypnotizer’ for the Giffard to fully recover. ‘Dead Time’ is one from the last EP ‘Is This All There Is ?’ a crashing mix of powerful vocals, with piles of low twang. ‘Dark Valentine’ steps up into more semi punk mode and bounces along with no cares. We are treated to ‘Trash’ and ‘Horror’ before one of my favourites ‘Die Alone’ with it’s catchy riff that you have trouble shaking out of your head, not that you want to ! The cover of the Backyard  Babies’ ‘Heaven 2.9’ sees us all rocking and singing, well it is one those songs that bonds the most unlikely of souls. Ending on two more from the 2019 EP, ‘No Means Of Escape’ and ‘All There Is’ it was a joy to encounter Psychobabylon again. No frills, no delusions of grandeur, just a bunch of lads from Yorkshire who know how to knock out some hefty rock and roll.

KIKAMORA are loved by most followers of the NWOCR movement. But those who have yet to hear them, are in for a real treat today. From the ’Masquerade EP’ of a couple of years ago, ‘Alibi’, with its kick ass guitar from Jimi Bessant and bluesy, throaty vocals by Wilf Kite, is a fantastic introduction. So there is a change in the air as we listen to Kikamora, hard hitting rock, laced with lashings of blues that take us into the early evening. More from ‘Masquerade’ as we delve into the deep with ‘Sat Around Living’ a chance for Kite to express himself, to the full. ‘Said And Done’ is much more soulful and it becomes increasingly evident, just how talented this band are. We get another turnabout with ‘Off The Cuff’ that features a Sabbath medley. Saxophone player Frankie joins the rest of the band, towards the end and ‘Half Rats’ is performed with loads of groove before the finale ‘Wrong Place Right Time’. Super set from the Bristol 5 piece, always give maximum effort and always in demand these days.

THE LOVED AND LOST are more melodic, but with added metal. The haunting and dramatic vocals of Jordan Quinn, reverberate across the room with warmth. Stand in bassist Becky Moore, fits in with ease and balances with guitarist Dan Fletcher admirably. The 4 piece from the Worcester /Birmingham area are very much in line with Nightwish, Halestorm and Evanescence, Becky is actually in a tribute band called ‘Forevanescence. So lovers of those producing a symphonic and gentle side that can suddenly take to pressurised riffs, will adore these. The 3 track single that was released in 2018 features ‘Parasite’, ‘Undone’ and Drag Me Down’ the latter being the title and is a perfect way of learning what ‘The Loved And Lost’ are about. Drummer Sam Ward completes the line up and they gained a mass of new fans tonight, judging by the applause at the end.

BLACK ROZE overcome initial problems with Viixens mic and start off with the swagger of ‘Godz N Queenz’. It’s a night to celebrate the amazing debut album ‘Spiritual Hell’ by playing all of it. ‘Obscenity’ sees more complex lyrics with a simple hook from the guitars. A break from the album with a cover of The Eurythmics ‘Sweet Dreams (Are Made Of This)’ that Viixen handles effortlessly. ‘Lost’ echoes Jefferson Airplane with Grace Slick in so many ways, it is really easy to attach yourself to that one. Lots of banter between Viixen and guitarist Baz Roze create a laid back slant on the set and as the show progresses, the Giffard audience appear to be drawn in. ‘So Sleazy’ is a little shocker, with a singalong chorus before the last number, which is a fabulous cover from 1966 ‘These Boots (Were Made For Walkin)’ originally recorded by Nancy Sinatra. The band have matured and grown so strong since their humble beginnings, in 2015 they were a covers band, but after several well received shows, a couple of years ago they decided to write original songs and now they are reaping the rewards. Support slots with Diamond Head and Warrior Soul are now under their belt and they are in the process of planning a major UK tour this year.

Headliners ROCKY SHADES WRATHCHILD need no introduction. Starting out in Evesham around 1980 and becoming one of the most OTT glam metal bands, these shores has ever produced, Wrathchild were our Motley Crüe. These days Rocky Shades is carrying on the name with his own version, roping in Jonny Suicide on bass and drummer Gaz Wilde from The New Generation Superstars and guitarist Oz Paul. The platform boots, topless women and pyrotechnics may have long gone, but not the humour and nor the songs, that are embedded in our hearts. As is customary ’Stakk Attack’ is the opener and the Giffard erupts, it’s well packed in here tonight as Dementia Fest has been a triumph. ’Sweet Surrender’ and ‘Trash Queen’ get us all singing and honestly the atmosphere is electric. Rocky releases the bazooka and we are covered in confetti, while AJ the vocalist from NGS, joins them on stage and we all do a decent rendition of ‘Pretty Vacant’.

So it’s the end of a perfect day, what a great show to help the Dementia Awareness Charity. Many thanks to all those involved in organising the event, we at MMH – The Home Of Rock Radio were honoured to be a part of it.

Many thanks to – Dave Evans, Brett Hall , Doddy White , Richard Forbes, Donna French, Alan Hatch & all those behind the scenes, that made it such a success.