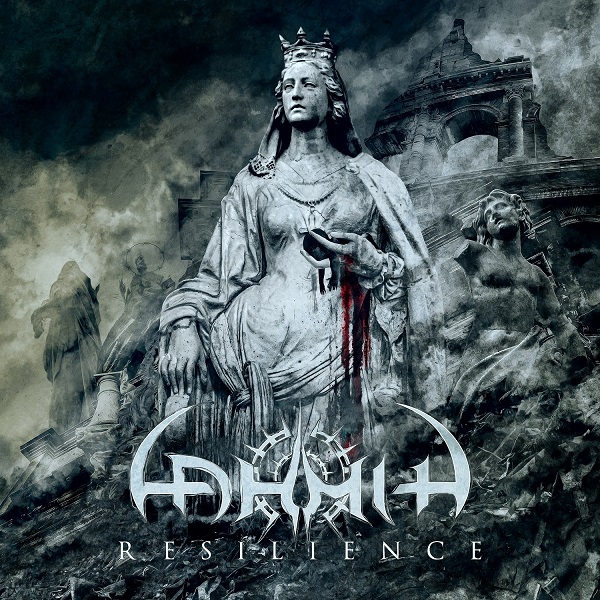 It’s taken seven years for Italy’s Lahmia to follow up their rather splendid debut, Into the Abyss. Their highly melodic, gothic tinged death metal was like an intricate, extreme take on Dark Tranquillity’s mid-career material, complete with the occasional coarse croon that channeled Ville Laihiala’s ’90s work with Sentenced. Not highly original, I grant you, but very good all the same, and they certainly had their work cut out with the long awaited follow up, Resilience.

I was disappointed on my first play through to discover that the clean vocals had been all but dispensed of. Whilst I have no complaints about Francesco Amerise’s Stanne / Lindberg styled bellow, those clean passages added an extra dimension to Into the Abyss that were invaluable to its success. Perhaps they just didn’t make sense in the context of these songs; after all, including something for the sake of it would just be diluting the quality. Still, their removal makes it more difficult to create distinctive material. In essence, the challenge is to make something as good as before, just with fewer components.

Lahmia prove to be more than capable of this task. Resilience is a finely crafted, well-paced album, with plenty of energy. It’s not as immediate as many of the more popular melodic death metal bands, but the hooks do just enough to draw you in for a few more spins. Whilst it’s not a technical album by any means, there’s a lot of depth to many of the tracks, so it can take 3-4 listens for everything to sink in. There’s a nice sense of discovery, as something new reveals itself with each passing play. This certainly does the record no harm as far as longevity is concerned.

Resilience helps to bed the listener in by opening with a duo of lively melodeath numbers in the form of “Elegy for a Dying Sun” and “Her Frantic Call”. They are both fine examples of the genre at its best, with smart riff sets and multi layered melodies propelled by a relentless rhythmic blast. “Divide et Impera” and “Limitless” are robust workouts, working the melodies into the framework of the riffs rather than around them, allowing for a more intense, heavier experience. “The Frayed Lines of Time” is the simplest song of the lot, and whilst some may deem the harmonies too saccharine in comparison to the other tracks, it does very little wrong. The aimless noodling of “Void of Humiliation” represents the only low point of the album, which soon sees redemption in the form of 11 minute epic “The Age of Treason”. It’s an incredibly tight and concise composition, never feeling like a test of endurance; a sure fire sign you’ve done a good job with a lengthier track. “Existential Vastness” relies more on melancholic atmosphere than searing riffery, but still has enough strong ideas to carry itself on a purely musical basis, and makes for a fine closer.

This is another impressive album from Lahmia. It’s a shame it’s only the second record they’ve put out (having been active since 2001), as they’ve got a knack for writing superb melodic death metal. Hot on the heels of the marvellous new Soilwork album (review here), Resilience will ensure fans of the genre have a great start to 2019.

Highlights: “Elegy for a Dying Sun”, “Her Frantic Call”, “Limitless”

Find out more on Lahmia here:

Resilience is available on January 18th via Scarlet Records, and can be purchased here.