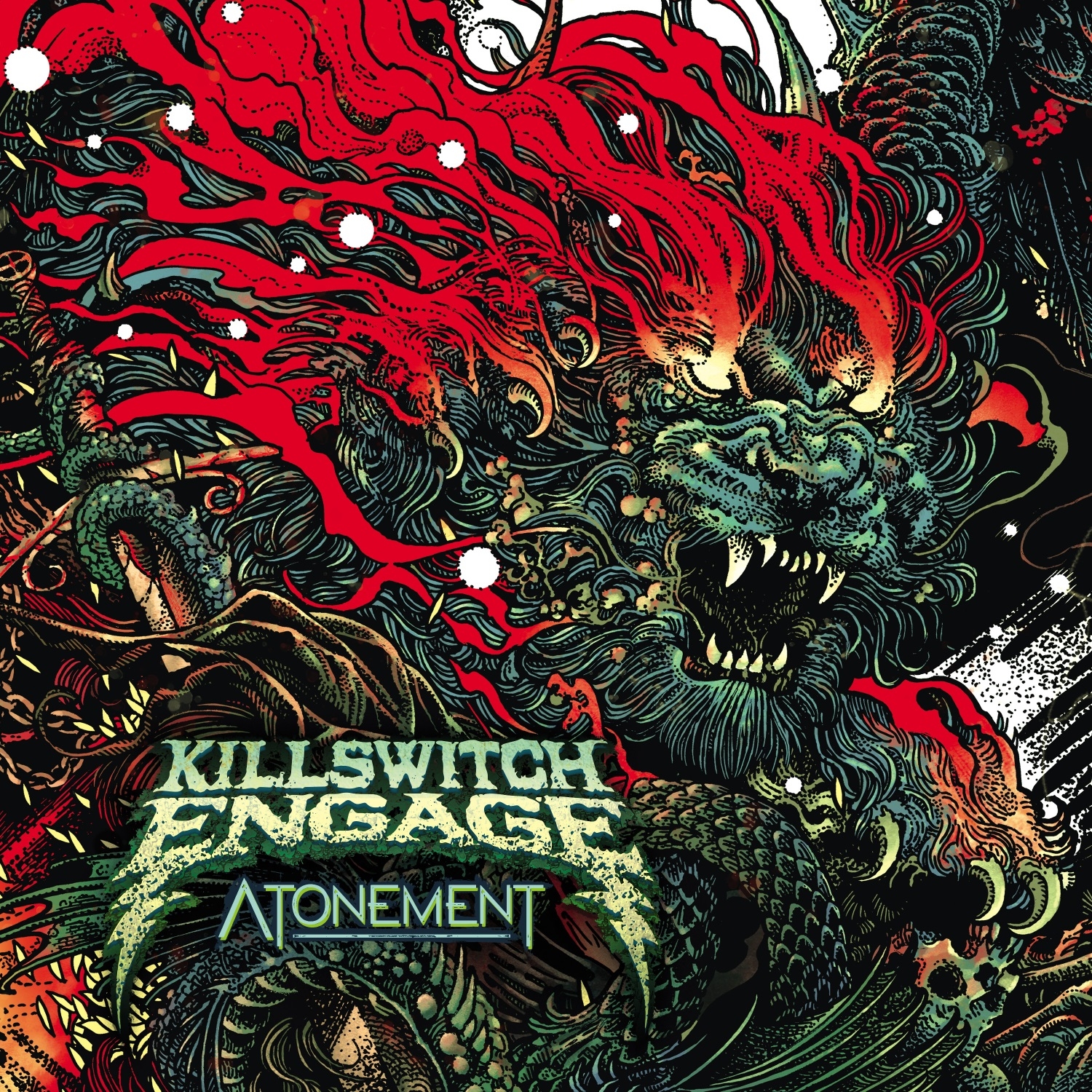 As a reviewer, it is critical to stay unbiased and open-minded when listening to new material. This is mostly to ensure that a fair review is delivered, void of unnecessary criticism or undeserved praise. Which is why, as a die-hard KsE fan, this review is probably going to be one of the most challenging that I will ever do, as not only do I have to review one of metalcore’s most beloved and talented bands, I also have to contain myself from heaping praise onto the band and reverently worshipping their glorious name to keep this as unbiased as possible. Well, here goes nothing!

There isn’t a whole lot to say about Killswitch that hasn’t already been said before. The five-piece Massachusettes based band are widely credited for installing a new wave of melodic-death metal-inspired metalcore in the early 2000s and many consider them to be one of the greatest metalcore bands of all time, myself included. With their new album Atonement, the band have switched record labels, parting ways with Roadrunner and partnering with Metal Blade records. The band have also incorporated guest singers in their new album, with Ex-Killswitch Engage and Current Light the Torch frontman Howard Jones making a small return and Testament’s Chuck Billy providing some brutal death growls as well. Lead singer Jesse Leach has undergone vocal surgery for the new album and it is fair to say that this is one of his best performances, with a much rounder, powerful clean sound and a more natural-sounding scream thanks in part to Adam Dutkiewicz’s production skills (and of course blessing us with his guitars and brutifal backup singing skills). The band’s previous album Incarnate was very well received overall; however, some felt that the band weren’t venturing too far out of their comfort zone and not doing much that was different from what they have been doing for years. However, those who felt this was a problem with the band will be delighted to hear that this time around the band has taken some exciting new directions in terms of their writing, with influences from other subgenres of metal in some songs, and a general change in musical content throughout.

This is heard immediately with the opening track ‘’Unleashed’’, one of the album’s greatest tracks. It opens with an ominous, doomy guitar riff which leads into a heavy, rhythmic verse that could possibly be mistaken for a breakdown if Jesse’s beautiful cleans weren’t present. This is then contrasted with a much slower, harmonically focused chorus, before moving swiftly back into the heavy, rhythmic verse. The song shows a shift in focus for the band, with a strong emphasis on rhythm rather than taking their typical harmonic and melodic approach. That being said, the band does manage to bring this melodic feeling back in the bridge, where we hear them make superb use of modality and extended chords within the guitars to create a warm, somewhat soothing feeling, something that they do amazingly well before bringing it back to the chorus. Although I personally think that some of the track’s guitar work is a little underwhelming, this is a fantastic song and a great way to start off the album.

What better way to follow this up than with a collaboration that fans of the band have been asking for years. ‘’The Signal Fire’’ featuring Howard Jones is one such track that finally gives fans of both Howard and Jesse exactly what they want, the best of both worlds. The track by itself is possibly one of the heaviest Killswitch songs out there, with death metal-inspire riffs, powerful growls and soaring cleans provided by both Howard and Jesse, and a relentless sense of speed due to the fast-double bass. However, where some fans may find themselves disappointed is within the collaboration itself. Although the second verse has Howard screaming throughout, there isn’t any presence of him singing cleans without Jesse, which personally I find to be a huge disappointment as many remember Howard for his stellar clean voice. Make no mistake, the song is fantastic as it is, however it almost feels as though Howard could easily be replaced by Adam D in the choruses. The second collaboration with Testament’s Chuck Billy in the song ‘’The Crownless King’’ is handled a lot better. The band themselves seem to have taken some influence from Chuck himself, with the riffs having a very Testament-y vibe to them, and as such his vocals work wonderfully well within the song. Structurally the song is fairly simple, following a typical verse-chorus form, but the usage of thrash metal elements mixed with good old Killswitch sounds makes this a very enjoyable listen.

Although for reviews I often focus predominantly on the musical elements of the album, for this band it is almost impossible to not briefly mention the lyrical content of the album as not only do several songs shift focus heavily towards the lyrical content but it, like the musical content, is quite varied thematically. One song that must be mentioned is the beautifully worded ‘’I am broken too’’, which describes someone recognising someone else’s mental issues due to them having similar problems themselves. In general, the lyrics are beautifully crafted here; however, the best example of this is the change from ‘’I am broken too’’ heard in the first chorus to ‘’You are broken too’’ in the second chorus, which gives each chorus a different message. We also hear an anti-establishment theme in the song ‘’Know Your Enemy’’, ‘’Take control’’ inspires us to accept responsibility and take control of our lives, and ‘’Us against the world’’ instils a sense of unity and empowerment, that the listener isn’t alone in their struggles.

All these songs are great to listen to, however, when put together and heard within the context of the album, they also hold my main complaint about the album, a lack of structural variety. Now, this isn’t at all a problem if you were to listen to each song out of context, however in context, almost all of the songs follow a very basic verse-chorus structure and, when listening to the album, you do get a sense of deja vu. This leads to some of the album’s best tracks getting lost and the album, in general, sounding ever so slightly samey. Some may see this as only a small complaint in the grand scheme of things as the actual music is varied enough to satisfy most listeners. However, in the case of ‘’I am broken too’’, the excellent lyricism mentioned earlier can easily go unnoticed, as the song is both very simple musically and structurally, which is an absolute tragedy.

Killswitch Engage as a band always have (and probably always will) stick to their formula for structuring their songs, which of course is both a good thing and a bad thing. In this case, it holds the album back a little from being entirely separate from their previous works and causes some songs to be lost due to a lack of variety. Some fans will be disappointed as a result. However, in my opinion, Atonement more than makes up for it with what it does introduce. The musicianship and production are amazing, the album houses some of the heaviest songs the band have ever created, and it takes some untraversed musical directions in some songs with clear influence from other subgenres across the album. Overall the guys have done a really good job with Atonement and it is certainly a worthy release from the best band in the world………… (okay so maybe I am a little biased!)

Highlights: ‘Unleashed’, ‘The signal fire’, ‘Crownless King’, ‘I am broken too’