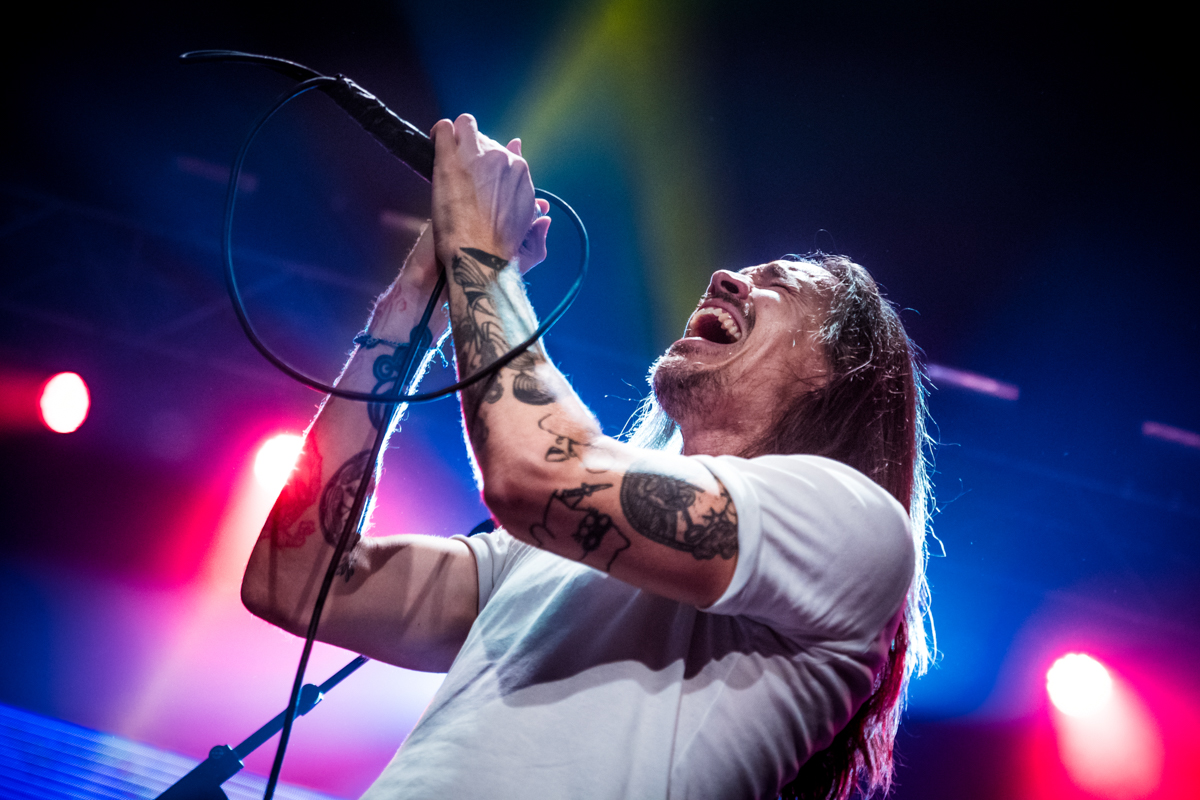 For the first time in three years, nu-metal phenomenon Incubus blew the crowd away from a global tour, with them returning to our metal-loving land of Birmingham. The five piece did not disappoint with their set list reminiscing over their two decade career span with classics such as ‘Pardon Me’, ‘Megalomaniac’ and ‘Drive’. Supported by Melbourne based artist Ecca Vandal who will soon be in the spotlight of tour life herself, who was given the fulfilled job of prepping the crowd for the ‘Adolescents’ performers.

Ecca Vandal
You may be lucky enough to have already heard of Ecca Vandal, South African born with Sri Lankan Heritage. But if you are currently unaware of who this artist is, let me sum her up. A sassy amalgamation of musical hybrids, performed with the most energetic display of the Vandal sound. There truly isn’t a specific genre this chick has but whatever it is, she owns it. Waltzing onto the stage in a bright yellow playsuit bouncing around with effortless energy is the voice of non-other than Ecca Vandal at last nights Incubus gig at the O2 Academy, Birmingham.

Expressing appreciation during her set, Vandal gave a shout out to the headliners “Its been an absolute honour to support Incubus” as the crowd roared, she definitely knew how to please an audience and set the bar very high for what was in store….

Ecca Vandal also walked straight off the stage to greet fans at the merch stand after closing her set by introducing ‘Broke Days, Party Nights’ saying “Birmingham, its been an absolute pleasure…thank you.”.

For SURE a new favourite for me.

Incubus
As the lights turned the academy pitch black, the army of fans rumbled as a curved screen at the rear of the stage lights up, highlighting each instrument on stage and the entrance of Brandon, Mike, Jose, Chris and Ben as they walk on to a drone of sound that got the audience pumped!

What really set this evening apart from any other was the subtle covers that were hidden in a variety of their own classics. Opening with ‘Privilege’ that had an Asian banger of an anthem from non other than Panjabi MC! Watching Brandon transition from nu-metal to heavy pulse beats was such an epic experience; he, of course, had his own set of conga drums to the back of the stage which he emphasised the main rhythms on making every single person in that room bounce themselves silly!!

I remember the first Incubus record I bought was a 7” blood red vinyl version of ‘Megalomaniac’ and still to this day I use it as a way of getting out anger at the gym or just on a general day to day basis of frustration. So to see them perform this particular track was a total highlight for me! Red lights glaring from the stage, devil horns everywhere and I swear at one stage everyone was bouncing that hard the balcony was shaking!

Colour across the screens was a prominent characteristic of the stage production which I can guarantee was no coincidence. For example during ‘Love Hurts’ from a teenage favourite of mine ‘Light Grenades’, a bright pink light shone as a beam behind the silhouettes of the five piece, representing a high essence of lust and/or love.

One thing everyone was waiting for was the iconic vinyl flicks during ‘Pardon Me’ which I think made all the old school fans feel 15 again and the new generation of fans know what a true deejay’s skill level can reach! Female participation wasn’t just prominent during Ecca Vandal’s performance; the second Brandon took that shirt off….girls (and guys, understandably) went, wild. Like seriously, that atmosphere was unbearable…but yeah….wow.

Looking back on the cover songs that randomly popped up into the set list, pretty much every person that attended this gig will definitely agree that their cover of Chris Isaak’s ‘Wicked Games’ was breathtaking. One chick next to me was melting at the sound of Brandon belting out the high notes that we all attempt…don’t deny it. They also managed to slip in Snoop Dogg’s ‘Gin and Juice’ during ‘Are You In?’ AND Pink Floyd’s ‘Wish You Were Here’ during their final song of their main set.

Whilst introducing ‘Are You In?’, Brandon shouted out to the crowd “Is everybody in?” which, if you’re a pretty hardcore Doors fan like myself you’ll know, is an iconic quote from Jim Morrison used in a poem called ‘An American Prayer’; this happened to fit perfectly for introducing the ‘Morning View’ marvel.

If I was to be really critical the only thing I would say I was disappointed with was the audience interaction; I didn’t feel much was said in-between songs but if I think about it realistically, do they really need to speak out that often? I mean, I felt pretty damn privileged to be able to say I saw Incubus in Birmingham during a tour of a new album….some bands don’t even make the span that these guys have been writing music and touring for! They have loyal fans and are truly loved by any audience because their performance holds its own, its different, its unexpected and its defiantly an experience. But they definitely should have played somewhere bigger than the O2 Academy, for sure.

Incubus are currently doing a world tour and are promoting their latest album ‘8’ which is available on CD & Vinyl at their shows or as various formats and bundles through their website.

Setlist
– Privilege (Plus Panjabi MC)
– Anna Molly
– Megalomaniac
– A Kiss to Send Us Off
– State of the Art
– Circles
– Echo
– Pardon Me
– Sick Sad Little World
– No Fun
– Love Hurts
– Absolution Calling
– Wicked Game (Chris Isaak Cover)
– Adolescents
– Are You In? (Plus Gin & Juice Snoop Dogg Cover)
– Wish You Were Here (Plus Wish You Were Here Pink Floyd cover)

Encore
– Punch Drunk
– Drive
– A Crow Left of the Murder