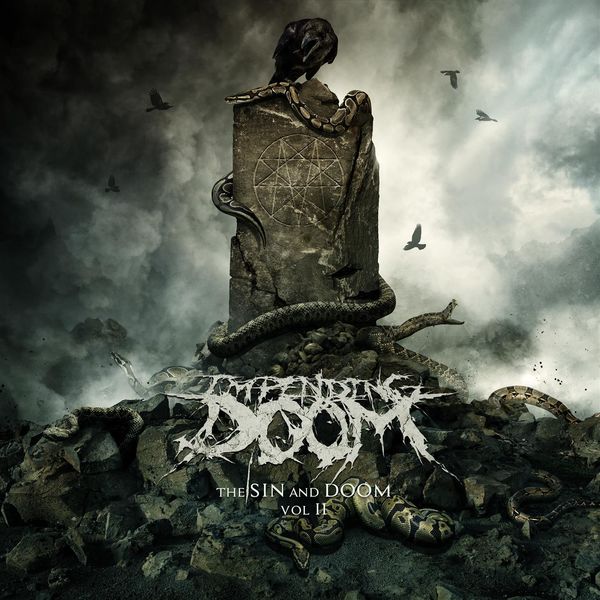 The Californian deathcore guys in Impending Doom end a lengthy 5 year wait since their last album, with a new release titled The Sin and Doom Vol. II. This wait will have felt especially long for real big deathcore fans out there (if there are even any left), because Impending Doom have provided the genre with some massive albums, There Will Be Violence and Baptized In Filth to name a couple. Not only that but there seems to have been a lull in this style of music for the most part of this decade, and a big name like this in the genre dropping a new album is sure to turn some heads, including mine to some extent. I enjoyed some Impending Doom back when they were releasing stuff more frequently, namely Baptized In Filth. Being a fan of death metal in general and a lot of the deathcore stuff when it was at it’s height all those years ago, I was a little intrigued as to what an Impending Doom album in 2018 would sound like. While it’s not necessarily bad, after a few listens, I can see why it took so many years for me to build up that little bit of intrigue.

If Impending Doom were churning out this kind of material once a year, then I would most likely pay little to no attention to it. The Sin and Doom Vol. II unfortunately, is rather predictable. But even though that is a criticism, I have to say for die-hard fans of this style of music or Impending Doom, it will be one of it’s strong points. The album is certainly hard hitting, and it’s predictable in the sense that it maintains the level of quality these guys have previously been at, which in my opinion, isn’t bad. When I first ever heard some of Impending Doom’s early material, they did stand out from the rest a little with by how disgustingly low, heavy and dark their work was. Now whilst this album does still achieve that to some extent, I would have definitely appreciated the sound being developed more and a couple of risks being taken, especially after a five year wait. The album is just about powerful enough to push it into a few enjoyable listens.

“Sometimes I wouldn’t blame god, if he lit the world on fire” are some of the lyrics from the opener to the album The Wretched and Godless. As expected the album kicks off pretty fucking hard. For those who don’t know, Impending Doom are a Christian band with constant religious themes and lyrics in their music, and they haven’t stopped on this one either. The instrumentation on this one is nice and heavy and the production on this album is well executed too, the mix is extremely tight, punchy and low, just about what you’d expect from a band of this stature to have at this point in their career. But amongst the low riffs and battering drums, which don’t exactly offer too many exciting moments across the album, Brook Reeves does bring some dark lyricism and pretty great vocal performances. He has a wicked raspy, deep and dark vocal style that I do find really enjoyable to listen to, it cuts through the mix well, and at times throughout the album is the major standout.

Whilst the opener of the album isn’t bad, and the second track Burn is alright too, the third track War Music was the first track featuring some dull moments for me. The riffs aren’t anything special, and whilst the lyrics aren’t bad in particular, the slightly cringeworthy refrain of “This is war music” is repeated across the longest track on the album for over five minutes. The song just feels like a bit of a slog and even though, to the album’s strength, it doesn’t majorly dip in quality at any point, here is just the first sign of some boring moments. The follow up track EVIL is better, featuring some pretty swift instrumentation but mainly, some fantastic lyrics including Brook snarling the words I believe to be “If you hate the weak, you just became an enemy to me”, some of my favourites on the album, but then unfortunately after this, there aren’t any tracks as good as this one. The bulk of the album then feels very monotonous, and doesn’t develop from where Impending Doom left off as a band five years ago, and the higher points on this album don’t either to be honest, they just stop it from slipping into extremely dull territory. As you would expect, the few closers to the album only continue in a dull fashion, but this actually isn’t the case with this record. The tail end of The Sin and Doom Vol. II doesn’t exactly pick things up into sensational deathcore territory, but it’s pretty good. I really enjoyed the riffs on Devil’s Den, the main opening riff is one of the best on the album. Everything’s Fake after that being the pen-ultimate track isn’t too bad either, but pales a little coming between Devil’s Den and the closer Run For Your Life (She Calls). The closer is very good, it’s nothing we haven’t heard from these guys, like the rest of the album, but it is a massively heavy tune and more colourful than a lot of other tracks on the album.

All in all, Impending Doom have never exactly been one of my favourite bands ever, and they’re not going to change much with The Sin and Doom Vol. II, but it was an enjoyable enough listen. The main disappointment with this album is the sense that they are capable of actually producing some great deathcore music by pushing themselves a little more and just experimenting a touch. But they’re a huge band, and they’ve clearly found the sound that pleases their fanbase and like I said before, this album will probably please them a lot more than it did me. There are some proper great moments on this album, but none of this album resonated with me quite as hard as some of their previous work has. There are still plenty of destructive slow breakdowns and fast death metal passages, but it’s just not quite as catchy or sticky as some of their other work. Overall I’m just kinda indifferent about this album, I’m sure it’ll please plenty, but I feel Impending Doom could have pulled more off on this album. It’s not a bad one though.

Highlights: The Wretched and Godless, EVIL, Devil’s Den, Run For Your Life (She Calls)

The Sin and Doom Vol. II is available June 22nd and pre-orders are live here!