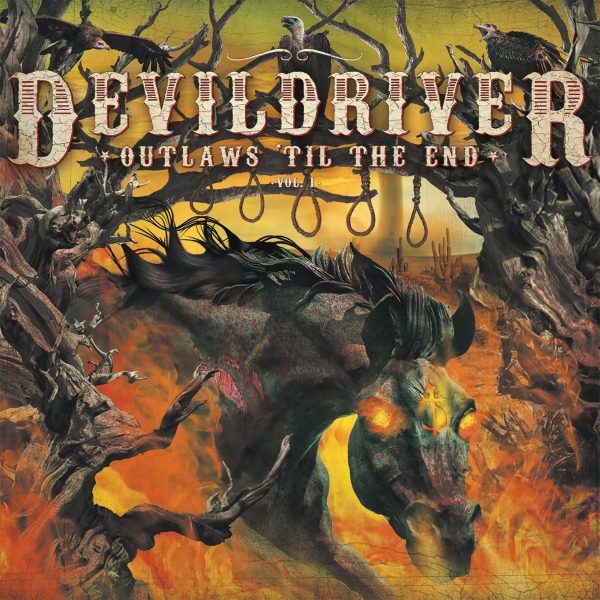 Coming together after the breakup of vocalist Dez Fafara’s previous band, Nu Metal merchants Coal Chamber, DevilDriver delivered tight, groovy melodic death metal. Following the excellent album Pray For Villains, the band started stripping the groove elements out of their music with mixed results. However, each subsequent album had at least one track with enough savagery to carry itself. On the announcement of a DevilDriver country covers album there was much speculation that it would be a horrendous misstep. The best one could reasonably expect would be a fun romp, with maybe a couple of fun banjo solos. Obviously, there is the possibility of it being a genuine masterpiece, but this has rarely ever occurred in the history of metal covers albums.

Dez Fafara continues to show himself as one of the greatest scream vocalists in the world on this album. His range and instantly identifiable tone are unparalleled. He elevates this album much beyond what the musical canvas would normally suggest. His understanding of when to belt and hold certain notes really gives these tracks a sense of dynamism that they would lack otherwise. Accented by the rock-solid drum performance, this at least prevents the songs from dragging. Sadly, with all his talent Dez is still hampered by not having anything particularly interesting to do with these songs. There are no hooks to scream along to, and no slogans to bellow at the top of your lungs, making every track rather unmemorable in the long run. This has less to do with the vocal performance itself, and more to do with the compositional flaws on this album. Speaking of which…

DevilDriver have really let down the concept of this album with their decisions regarding song composition. Country music at its best can be either a foot-stomping, sing-along party or a dark, introspective examination of one’s own life and mistakes. While metal can capture both of these feelings excellently, DevilDriver have laid down chugging, bland riff after chugging, bland riff. There is not a vocalist alive that could save these riffs from being boring, regardless of their natural talent. While Whiskey River delivers a change of pace with a large helping of black metal influence, even as someone who’s not a huge fan of black metal I find it incredibly derivative and uninteresting. On top of all of this, they insist on including guitar solos which, whilst technically impressive, add nothing to the song and never do anything melodically interesting.

Even the host of guest features on the album fail to add anything of interest to this album. Burton C. Bell’s contribution to Dad’s Gonna Kill Me sounds like he was just told to do what he always does on Fear Factory albums without regard for the music he was singing over. Making Copperhead Road a duet with Brock Lindow (36 Crazyfists) makes little sense as there is little chemistry of variation between the two vocal lines. Even Lamb of God’s Randy Blythe doesn’t really add anything to the tracks he features on. Blythe is perhaps the only vocalist to be able to exceed Dez as a screamed vocalist, but it feels like he doesn’t know how to use that voice over the musical canvases presented to him. Blythe has created some of the greatest screamed hooks in history, but here he can’t find a hook to scream. It’s sad and disappointing that such a star-studded line up fails to add much of interest to this album.

Outlaws ‘Til The End had such potential for it to at least be a fun album, however the delivery makes the “Vol. 1” at the end of the title sound like a threat. Perhaps DevilDriver will learn from the mistakes on this album and work on improving them for volume 2. This is by no means the worst album of the year so far, it’s just not particularly good either. Unless you’re a DevilDriver obsessive, you should probably skip this one.

Outlaws ‘Til The End is out now via Napalm Records and can be purchased here.