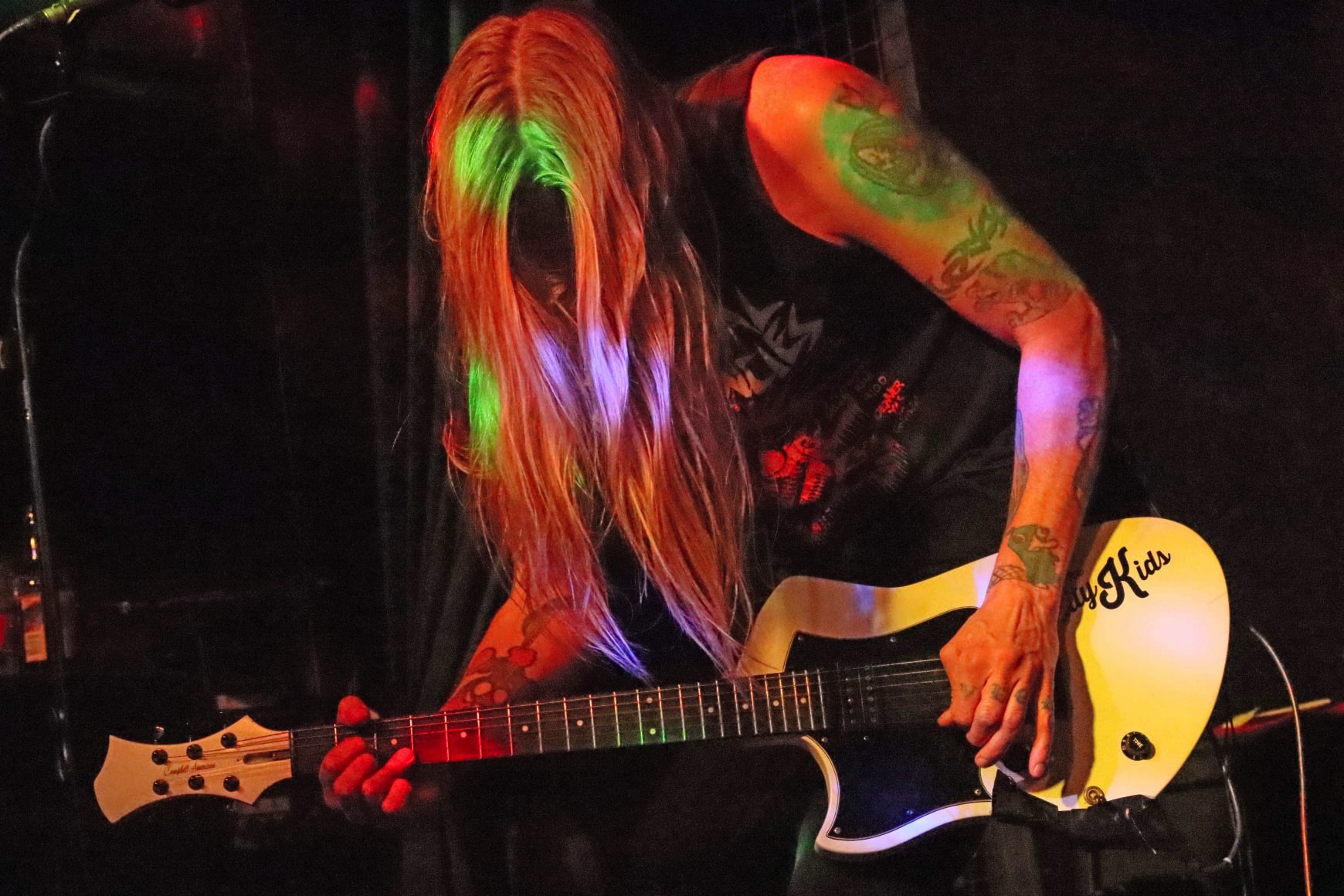 After what seems like a lifetime, it’s all set to go at the Giffard Arms in Wolverhampton. Seven bands are on the bill for the first Dementia Aware festival of the year, planned with precision by the man himself, Dave Evans. When I arrive, he is on the door sorting out wristbands, never a quiet moment for the organiser. As always the event is being held upstairs and as I head into the room, to see the first band, there’s already a healthy crowd present. Our compere for the day is the irrepressible Pete K Mally and what an incredible line up he’s announcing today.

MYSTIEK have the pleasure of opening today’s proceedings. This local 4 man outfit have been going since 2016 and regularly appear on local stages. Led by vocalist and founder member, Josh Dallas who also plays rhythm guitar, they are influenced by Alice In Chains and Pantera, so the set is heavy and packed with groove. Stacks of riffing from Will Fernyhough who is quite a talented guitarist, the solo on ‘Uneasy’ was really impressive. Lewis ’Smithy’ Smith handles his bass like a real bad muther, superb rumbling from him as well. Drummer Lewis Rochelle completes the line up and I have to say they were really on the nail. Their song ‘Shut Up’ is available as a single, so have a listen.

THE AUTUMN KILLERS  is the latest venture by Rob Reece, after the legend from South Wales disbanded his former crew ‘Reece’. Since the debut album last year, The Autumn Killers have received a vast amount of credit, they played the festivals ‘Wildfire’ and ‘Planet Rockstock’, they received stunning reviews for ‘Darkside’ by Planetmosh, HRH, ERB and PowerPlay and they also played Cardiff City Stadium which must be any Welshman’s dream come true. Today they play seven from the album and guitarist Duncan Richardson also plays a mini keyboard live for the first time. Rob is on bass and Graeme Hoy plays drums. ‘Rise’ makes good use of the keys before Rob’s vocals soar and climb. ‘One Of Five’ and ‘Do You Want It’ follow, the band have warmed up sufficiently now and the crowd are in full appreciation. I think ‘Numbers’ is the most catching of songs, it has a melody that swims and ambles so smoothly. Leaving us on the more lustful title track ‘Darkside’, which also has warm charisma, I was taken by how well this trio performed, an excellent show. Visit the bands social pages for upcoming gigs.

HAXAN are the only females on stage today, however they make up for any shortfall, with a blinding and gutsy performance. Mostly off the debut album ‘White Noise’ they belt out hard striking and powerful melodies beginning with ’Skeletons’. Sam Bolderson rips out some pretty amazing riffs while leading on vocals and the harmonies blend in perfectly from bass player Harriet Wadeson and Jess Hartley on drums. ‘Louder Than Words’ has a cool tempo, it’s a song that simply bumps along, low to the ground. In contrast ‘Killing Time’ has a stronger message in the lyrics. The more earthy ‘Black Sheep’ is quite a statement, I like how these girls from South Wales and the South West put it across with so much vigour and there’s some lush guitar accompanying the higher vocals. They end with ‘Bring The Thunder’ which is from the EP ‘Breaking Down The Walls’, another with pace, riveting guitar and blending rhythm. It’s the first time I’ve seen Häxan and I thoroughly enjoyed their set and not just me, judging by the tremendous amount of applause they received.

STEVE VINCENT and his new band are on next and I take a few steps forward to watch these guys up close. Steve is one of my heroes from the past, his bands Paradise Alley and Scarlet Tears, were part of the scene back in the 90’s, when I wrote for fanzines, stumbled down the Charing Cross Road to the Astoria or Marquee and then stayed up all night in the bar at the Colombia Hotel. Bands like The Dog’s D’Amour, Gunfire Dance, Rich Rags and Heartbreak Angels were mates that we shared the road with and those glam days of the late 80’s and early 90’s were drenched in velvet jackets, silk scarves, eyeliner and of course cuban heels. I hold my breath in anticipation for this debut gig as the nerves are evident. This is the first time on stage for two years, but as soon as the Paradise Alley number ‘Believe’ in under way Mr Vincent is in his element. Stesh Thompson and Andy Christie provide the guitar magic while Mark Whittaker handles bass, as the set continues with fresh and updated material. ‘Life Ain’t A Bed Of Roses’ is played live for the first time, what a beautiful song. Steve has the crowds full attention as he adds high kicks and sits on the floor on occasion, ‘All I wanna Do’ and ‘Last Train To Babylon’ sees harmonica and tambourine, with backing vocals and gentle caressing melodies. Andy Knott on sticks is as reliable as ever as they play a stupendous version of ‘Three Time Loser’ to finish with. I can’t wait for an album and more gigs, as tonight we witnessed the birth of something special.

THE DUKES OF BORDELLO  are a three man army of some magnitude, Andy Barrot provides vocals and guitar, with Chip White playing Slap ‘Doghouse’ Bass and Craz Taylor on skins. Together they issue a mash of rock n roll, that’s punked up and as hard as nails. A healthy set today from the ‘Deaf or Gory’ EP and the album ‘Lowdown N Dirty’ and the opening scorcher ‘All In The Name of Rock N Roll’ appears on both. ‘Alternative Jesus’ is slower and bewitching, while ‘Hellvis’ is a stomp in honour of the King. The cover of ’Strychnine’ rocks with all the same passion as the original by The Sonics ( Check them out for original 60s Punk ). Then we are lashed with ‘Wreckin Ball’ and ‘Down In The Gutter’ and the Giffard is swaying with this vast amount of delightful raucousness. Can you believe ‘She’s My Witch’ was written in 1958? The Dukes cover of the Kip Tyler tune is just as seductive and their version of ‘Won’t You Make Up Your Mind’, by the Australian band ‘Coloured Balls’ (which lasted one and a half minutes), is sheer punk joy. I like how Andy and the band breathe new life into these old and sadly forgotten classics. The nonstop shenanigans carry on with ‘Come Back Wilko (All Is Forgiven)’ and they bow out with ’Scream If You Want To Go Faster’. Oh what a fantastic forty minutes that was, loved them.

THE SUICIDE NOTES are the embodiment of British sleaze and after playing the last Dementia Aware Festival a couple of years ago, I have become a massive fan of all they do. The new EP ’Trampstamp’ is four tracks of blistering gutter rock and the acoustic take of ‘Black Dog Howlin’ is superb, they start today with that track and the electric version is just as sublime. ‘On the Rocks’ crashes in with a punch and Billy Tee winds his arms around the mic stand in embrace, while his sandpaper vocals reach out to the audience. ‘Momma Sang The Blues’ rings out and you have to adore the way they can adapt their music, acoustic or full electric they are captivating. From the new EP ‘Snakes Grin Within’ is aired and goes down with the Giffard punters really well. As we reach the glorious ‘Ragdoll’ the set is pulled by the sound engineer, without going into detail, Billy broke the law and the law won! So managing to add another episode to their growing and notorious reputation, the band leave the stage rather subdued and the room falls into a quiet and sombre atmosphere. Such a tragedy and Billy was full of remorse at the bar afterwards, but no need to worry, as there is a happy ending. ( I’m sure the Notes will be back at the Giffard, the first chance they get )

THE CITY KIDS  can be found all over the shop, with associated bands such as Falling Red, Tigertailz and Warrior Soul. So it’s amazing how they still have the time to participate in giving us some trashy rock in the guise of The City Kids. I first came across them at HRH Sleaze last year and fell for their pure, unadulterated and decadent style of rock and roll. No egos, no gimmicks they just get up and bash the hell out of everything on stage and this is what makes them so watchable. Tonight they headline and the title song ‘Filth’ from the upcoming second album is dished up as the appetiser. The band are fronted by J.J. Watt who created this line up after the demise of The Main Grains. Alongside him are Dennis Post ( Warrior Soul ) on guitar and bass player Berty Burton ( Tigertailz ), as we gather speed with ‘Best Of You’, ‘Before You Fall ‘ and ‘Left Behind’, all from the debut ‘Things That Never Were’ it’s all too apparent that The City Kids have a flavour that is both unique and engrossing. Wow, they are good on stage, it’s exciting and exhilarating stuff and as they get everyone joining in with the Wildhearts ‘Mazel Tov Cocktail’ the room is absolutely buzzing. ‘You Get Nothing’ is kicked out with its boisterous chorus and rumbling drums care of Dave Sanders ( Falling Red ), then ‘Round And (A) Round’ ends the main set on fast and wildly entwining notes. The encore consists of Motörhead’s ‘Killed By Death’ where Dennis takes over the vocals and Danny of the Suicide Notes plays guitar. It’s a brilliant piece of fun and the Giffard audience love it as Dennis is so impressive. ‘Bad Luck’ sees Andy Barrot on guitar and Alex from the Notes also gets up. ‘Rats’ is a collaboration album between the The Suicide Notes and The City Kids and Billy Tee gets back on stage (hooray, happy ending ) to sing the title song, which is naturally full of chanting expletives and profanities. Those last three songs were mind blowing, what a way to go out, the best finale I’ve seen for ages.

Dave Evans of Damaged Rose Promotions has done it again, hats off to the man for organising such a wondrous day. It had a bit of everything and although I didn’t win on the raffle, it was good to see so many receiving prizes. So much enthusiasm for the charity and a friendly bunch having so much fun, what a success. Pete did a superb job as compere and I have to thank Ruskin Roader for the photos, which are incredible.