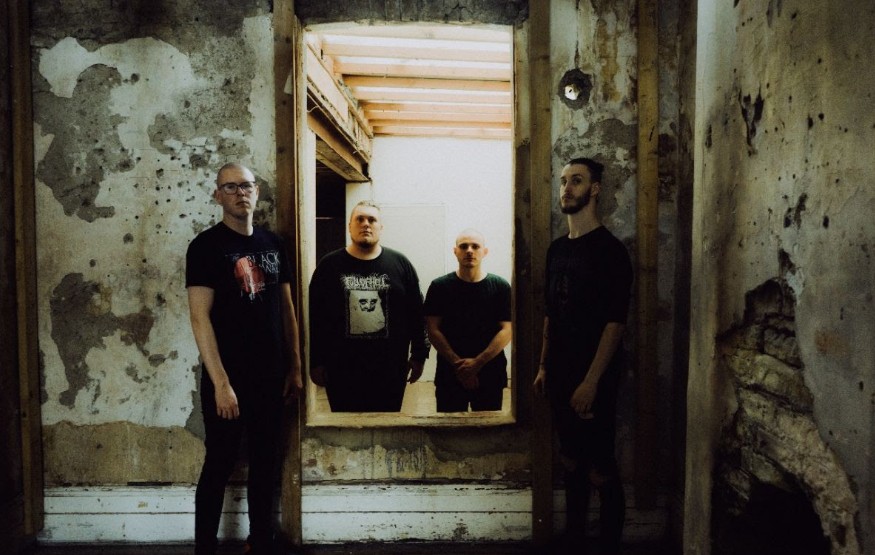 The future of British metal lies in safe hands with Conjurer, who today have announced their long-awaited new album Páthos, which will be released 1st July via Nuclear Blast.

Conjurer continue their journey as the country’s most exciting young metal band with the incredible new album. Celebrating the news, the Midlands quartet have also streamed the first single from Páthos, the mighty ‘It Dwells’.

A triumphant return from Conjurer following their world-renowned 2018 debut Mire, Páthos is a band flexing their creative muscles, deepening their approach and thought, and expanding their sound.

Bassist Conor Marshall comments: “Excited to finally be able to share the album with everyone! I’m sure this is the same for every band trying to release an album during the pandemic but it feels like we’ve been holding on to it for so long, so it’s nice for it to not be my problem any more and to be able to actually talk about it!”

Opener ‘It Dwells’ is the perfect introduction – earth-shatteringly heavy, unconventional, uniquely beautiful, and instantly recognisable as Conjurer. The track is centred on the contradictions of the emotion of ‘fear’ – that fear can be comfortable and constant, haunting and crushing. It builds to a point of breaking – the need to end fear battling against your will to go on. The repeated screams ‘I’ll have peace’ are an ambivalent declaration of defiance – give in, or fight, either way fear is gone.

Of the single, guitarist/vocalist Dan Nightingale states: “I think ‘It Dwells’ is a good introduction to the sound of the record, from the musical influences to the lyrics and how we’ve drawn from what’s been going on in our lives, it’s one of our most personal outings for sure. It’s nice to have been able to step up our game with the music videos for this album as well. Good album. Top track. Boss man.”

Páthos is not an album for the half-hearted or faint-hearted. Elements of Sumac, Gojira, old Mastodon and Oathbreaker, the new record is a multi-layered beast – sludge, death, doom, black metal and hardcore influences clash and collide throughout, all masterfully finished by Will Putney’s exquisite mix and master.

The fifty-minute runtime of Páthos is not without its moments of the sublime, with post-metal nods to Conjurer and Pijn’s acclaimed Curse These Metal Hands project throughout. That a band can be at once so triumphantly beautiful and gut-punchingly heavy is testament to Conjurer’s quality, and a surefire sign of their future longevity at the top of Britain’s heavy music scene.

Conjurer’s debut full-length Mire (2018) was released to a storm of attention from across the metal world, garnering significant acclaim from Metal Hammer UK, Kerrang!, BBC R1, NME, Visions Mag (DE), MetalSucks, Metal Injection, Loudwire and many more. Recipients of award nominations (Kerrang!, Heavy Music Awards, Metal Hammer’s Golden Gods) and countless albums of the year lists, Mire is a stunning listen, capturing the attitude of a young band who already know exactly who they are.

Hailed as one of the metal world’s most devastating, thrilling experiences, Conjurer are a band never content to rest. Following Mire’s release in 2018 the quartet soon toured Europe for the first time, appeared at multiple UK festivals, and support of doom titans Conan and Will Haven.

In the following years the band have toured the US twice, supporting Rivers of Nihil (stopping to record an Audiotree session along the way), and then Voivod, with Revocation. 2019 also saw Conjurer’s debut Download Festival appearance, thrilling a packed-out Dogtooth stage, and the release of the joyous collaborative project with Pijn, titled Curse These Metal Hands.

It was only at the end of 2019 that Conjurer closed out their triumphant Mire cycle, with a sold-out UK run – their debut headline tour. Using the COVID-19 pandemic to record and craft Páthos, Conjurer returned to the live setting performing at the Download Pilot 2021 and Bloodstock 2021 mainstages.