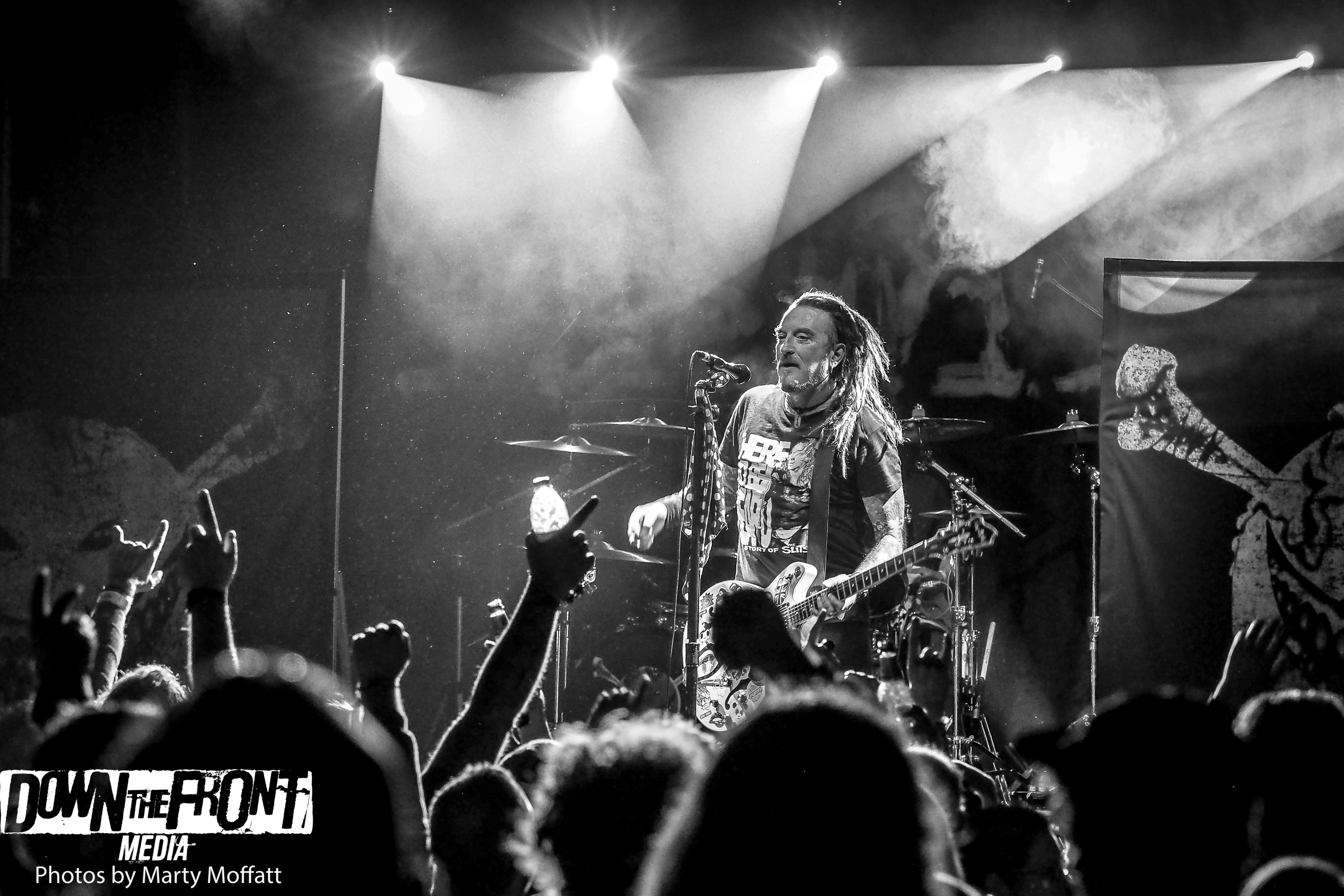 Day 2 and yet again it looks like the sun Gods are shining upon us.  You know what they say, suns out, bingo wings out!

Pete K Mally once again takes to the stage with his trademark red and black shirt. He gives us a quick précis on yesterday’s events and how amazing they were.  Looking forward to what we have on today he is that excited he exclaims he could s*@t himself! The person who gets to do his washing must be thrilled!

The Brink were a change to the original line up, and what an addition they were.  There were rubber wristbands being given out and left on tables, creating a buzz, and everybody loves a freebie!

Taking no prisoners, they kick straight in with a lively set, ensuring they will leave their mark as the first up today, they will most definitely be remembered.   We were officially back in the festival room, with Tom Quick, shouting out to the crowd ‘is anyone drunk yet’ to which he gets an affirmative.

I had never seen this band live before today, they were a revelation.  I cannot wait to catch them again in Scotland.

The stand out track for me was Never Again from their debut album, which had the sound of classic glam rock, catchy, bouncy, fun but with a hard edge.  The chorus had first time listeners, singing along before it was even half way through.

Although predominantly reviewing at the main stage, I couldn’t help catch Welsh legends – Everyday Heroes. Maybe young in looks, they are mature in their song writing and stagecraft.  Producing classy, up tempo blues, spliced with good old-fashioned rock n roll.

They play with confidence and appear to thoroughly enjoy the occasion. Vocalist and guitarist Luke Phillips, sure knows how to work the crowd.  Each time he plays a guitar solo he steps forward, of the microphone, the crowd respond with cheering and chanting.  This may be a smaller stage but the crowd is not.

As Little Bit of You starts up, the crowd reacts and the wall of noise from them reflect their appreciation.  A pure deep south sound is produced with this track.   Singing out “ a little bit you”, the crowd respond back to Phillips, “a little bit of you and me”  “  The band continue to feed off this crowd.  To me this was the defining moment of the set. Well worth my visit.

This is the first time I have caught Fire Red Empress live.  They could have been renamed Fire Red ‘Impress’.  Judging by the comments following their set, it wasn’t my opinion alone. Tongues were wagging and I have a feeling we are going to be hearing a lot more about them after today.

Starting the set with Half Bird, Half Beetle, Half Man, Jennifer Diehl’s vocals are a hybrid of a soft ethereal nature bordering on operatic, then the unexpected screams cut through this akin to the vocals of Kat Bjelland.

Midway through the set we are treated to a cover of  ‘Sabotage’ by The Beastie Boys.

The set ends with Dead Nature and 40 minutes have never gone so quick. Bring on album number 2!

I will definitely be checking out these guys and gal pretty soon.

Falling Red pulled out of the festival due to the devastating news that bass player Mikey Lawless has been diagnosed with incurable brain cancer.  In an act of total respect, Call of the Wild, made the decision to not fill this slot on the main stage, which was a risk especially owing to this being the first year the festival has ran.  Instead, during the stage time allotted to the band, their music was played out from the main stage.  This risk paid off.

This act of pure of dignity for Mikey was met with appreciation by the crowd who stayed at the main stage and listened to the tracks being played.

During this, a bucket was circulated to collect funds for Mikey’s bucket fund, which was set up by his fellow band mates.  During the set time almost £300 was raised for Mikey.

A later edition to the festival line up and my word what a change! I have seen the Crows on many occasions and knew that I would not be disappointed. Straight onto the first song ‘Don’t give a damn’ and we are captivated.  A lot of fans had been looking forward to this all day, especially going on the amount of  Those Damn Crows T-shirts around the festival.

Second song in and we are being treated to a new track ‘Long Time Dead’.  In true form, it is as good if not better than we would expect.

Halfway through the set we get the obligatory chants of ‘Ronnie, Ronnie, Ronnie’ which has become a predominant part of their stage routine, driven by the fans.

It’s time for the final song and what else could it be than the anthem that is ‘Rock n Roll ain’t Dead’.  Shane Greenhall takes to his custom made box, bearing the Those Damn Crows logo, which is thrown down into the pit, it’s like speakers corner and he is chanting the gospel “who said rock n roll is dead”. Hands are punching the air,  in unison.

The finale comes with Shane shouting we are ‘Those’.  ‘Damn’.  ‘Crows’, punctuated by instruments. Don’t worry Shane. We won’t forget. Roll on that second album gentlemen.

The last time I saw The Wildhearts live was 1993 so to say I was long overdue was an understatement.  The buzz had been all around since yesterday and I could categorically say that most people here this weekend were here to see them.  Die-hard fans who have followed them from the start to now, people like myself getting reacquainted and maybe some new fans.

The word going around was that they had been on site since approximately 6am, so they were obviously as psyched as us all about the festival.

They were a little late coming to the stage, which at first left people a little worried, but then boom, on they came, Ritchie, C.J, Danny and Ginger cranking out their new one Dislocated , followed swiftly by Everlone. With favourites such as Caffeine Bomb, Sick of Drugs and Vanilla Radio to follow, Call of the Wild festival was jumping to say the least. Let em Go sounded like we’ve been singing along with it for decades and this reflects The Wildhearts’ ability to produce incredible tunes that are both poetic and ear-worms at the same time.

Danny stands motionless apart from his hands and mouth as he singing backing vocals .He is seen wearing other festival performers the Last Great Dreamers t-shirt, Ritchie is bang on as usual, C.J looks like he is getting younger by the day.  Ginger is just simply rock, his scarf hanging from his microphone and a smile on his face.

The performance was impressive, albeit a bit short, but as the stars shone and The Wildhearts left the stage, the verdict was definitely that Lincoln’s first rock festival will by no means be the last.